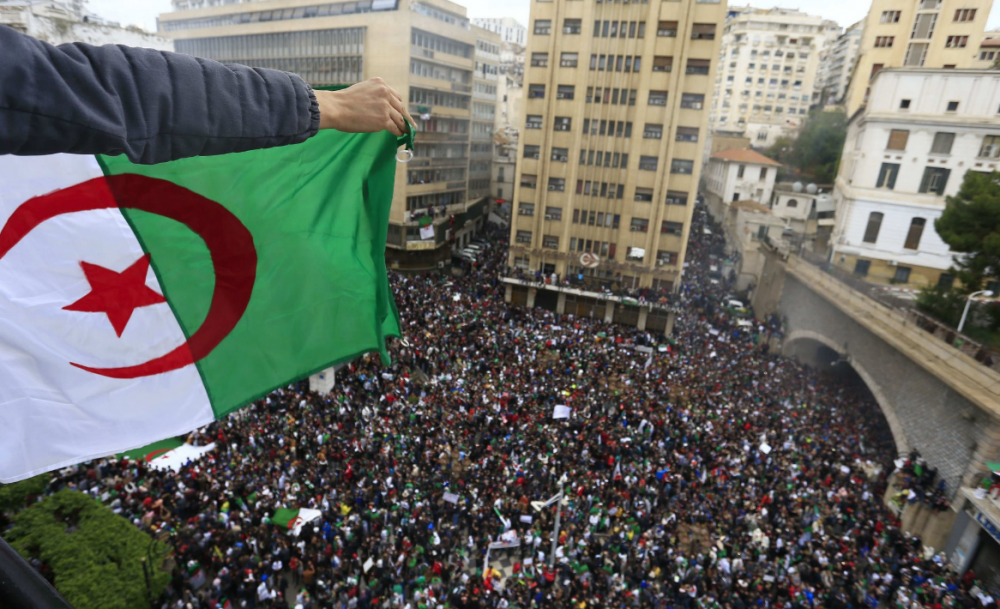 On Tuesday (26 March), the old general, Gaid Saleh, appeared again on Algerian state television to read a statement, with great difficulty and many errors. He was keen to start, as usual, by warning the Algerian people that their protests “might be exploited by hostile local and external forces, which resort to suspicious manoeuvres aimed at destabilising the country”, without specifying who these forces are.

This is because ambiguity is exactly the aim, to create a ‘siege mentality’ in order to ensure obedience from the protesters. Then, after some hypocritical praise of the protesters, he moved to propose what the ruling gang sees as a “constitutional and sound solution to the crisis”, which is “the application of Article 102 of the Algerian Constitution.”

Article 102 or the ‘Magic Solution’ 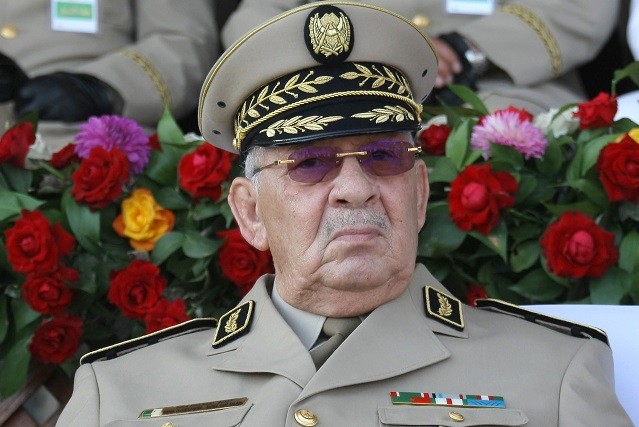 But what is contained in this article that makes it a solution to all problems? Article 102 of the Algerian Constitution states:

“When it is impossible for the President of the Republic to exercise his functions due to a serious and chronic illness, the Constitutional Council shall meet, and after ascertaining the fact of this impediment by all appropriate means […] shall appoint the President of the Council of the Nation to serve as an Acting Head of State for a maximum period of forty-five days.”

Thus, instead of overthrowing the hated president and his illegitimate government, and building the democratic system demanded by workers, peasants and revolutionary youth in the streets, they will simply replace the president with the President of the Council of the Nation. This manoeuvre is just another desperate attempt to save the regime, which is clearly demonstrated by the fact that the President of the Council of the Nation is Abdel Qader bin Saleh, who is a member of the same regime the protesters demand to be overthrown. He has had many official functions, including ambassador of the ruling gang’s regime, and has defended their policies. In fact bin Saleh was originally appointed onto the council by Bouteflika himself.

The gang’s plan is to sacrifice the sick president and replace him with one of the pillars of the very same system. They aim to give the illusion of change so that nothing changes. This manoeuvre is worthy of all the contempt with which the masses received it on the streets. Even the liberals, reformers and many other symbols of the old regime tried to distance themselves from the proposal as it would be political suicide.

But in spite of everything, the ruling gang did not make this concession happily, or in response to the demands of the liberals in parliament and air-conditioned rooms, but were forced to do so out of fear of the popular movement in the streets and strikes in the workplace and universities. This alone is another great lesson, which will raise the confidence and consciousness of the masses. 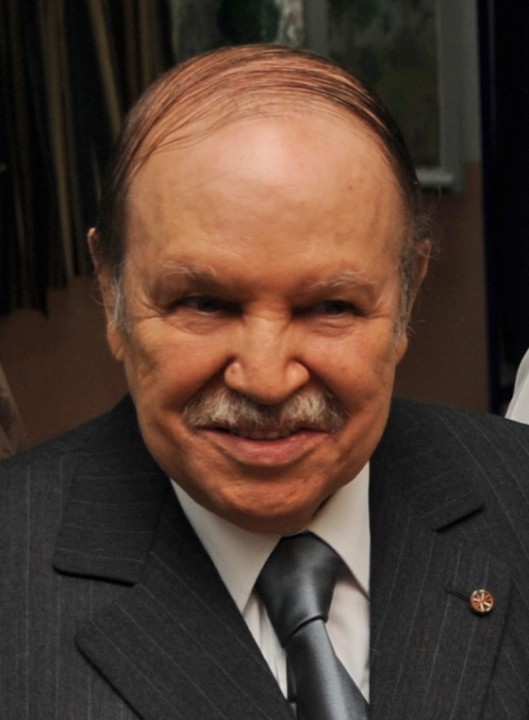 It is clear that the Army is trying to regain control and take the initiative to save the system as a whole, even by sacrificing some of its symbols. In order to succeed, they move cautiously and combine threats with concessions. They flirt with the popular movement and offer ‘suggestions for solutions.’ This is the age-old tactic known as ‘carrot and stick’.

Watching the manoeuvres of the generals and listening to their speeches, one cannot help but feel that we have already lived through this experience before. In a certain sense, this is true. There are many similarities between what is taking place today and the Egyptian Revolution.

In Egypt, at first, the leaders of the military establishment also wore the mask of a smiling friend of the revolution. The Army also made all sorts of promises, both possible and impossible. They sacrificed some symbols. Their agents, and some naive people, raised slogans like: “The people and the army are in the same camp”. However, once the Army regained the initiative, they revealed their real ugly face and imposed a bloody dictatorship on workers, peasants and revolutionary youth. We should learn from this experience, and be careful!

What happened in Egypt is no exception and can be repeated in Algeria. Why? Because when the class struggle intensifies, and society is divided into two conflicting camps – the revolutionary camp and the counter-revolutionary camp – society eventually reaches a stage where it becomes necessary to resolve the conflict in favour of one side or the other. Society cannot remain in a constant state of effervescence forever. Either the working class can overthrow the old order and take power into their hands, or capitalism will regain its lead and take revenge on all those who dared to threaten its sovereignty.

The working class in Algeria today, as we saw in Egypt, have delivered heavy blows against the power of the bourgeoisie and its state. However, it does not yet understand that it is able to sweep away the old regime. The workers do not yet have the necessary organisation and programme to seize power and take the levers of the economy under their control. At the same time, the capitalist class has lost control and is no longer able to govern in the old way, with the same old faces and institutions.

At this moment, a kind of temporary ‘vacuum’ has emerged, which sooner or later must be filled by someone or some organisation. As the military establishment, for the time being, is the only group that is organised and has arms in hand, it could well try to fill this vacuum. It seeks to do this in the interest of the capitalist class as a whole, but to do this, could seek to take political power off of the capitalist class, even sacrificing some of the symbols of that class (Mubarak, Morsi, etc., in Egypt; Bouteflika, Ouihya, etc., in Algeria…). The Army may even use violence against certain components of the same class, as we saw in the attitude of the army toward the Muslim Brotherhood in Egypt.

The liberal ‘solution’ to the crisis

Not far from the ruling gang stand a fragment of the old, abandoned politicians and those waiting for their share of the cake. There are also those who escaped the sinking ship early and a variety of people who all come within the spectrum of liberals and reformers. These people, until recently, were participating in governments, or standing close to the ruling gang, begging for crumbs from time to time. Now they have become ‘revolutionaries’ too, and have established themselves as leaders and spokespersons of the revolutionary masses. They have begun to propose all sorts of ‘solutions’, whose common denominator is to maintain the existing order and create a ‘consensus’ for the ‘benefit of all’.

The liberals and reformers think they are very realistic. They ‘hate’ the ruling class, which they consider too selfish, stupid and unable to maintain their own system, so they volunteer to do the job instead. They also hate the working class and the revolutionary youth, because they consider them extremists and adventurers, so they try to convince them to be patient and realistic. However, if the masses are not convinced, these liberals will support the army in crushing the movement under the banner of ‘democracy’ and ‘national interest’.

This is what the so-called opposition parties are doing in Algeria today. After the revolution broke out and the class struggle intensified, they shouted in unison for all to listen to the ‘common interest’, to establish a government of ‘national unity’ (the unity of those who have and those who have not) and to install well-known national figures (loyal figures to the bourgeoisie), and so on. These fake friends are more dangerous to the revolution than the obvious enemies, so we must fight against them just as we fight against the ruling gang and its regime.

Despite their pretensions of realism, these liberals are the most fooled by delusions and utopias. No illusion seems impossible to them. They believe that the existing system can be reformed and that capitalism can be built without exploitation, poverty and unemployment. They think that serious and lasting improvement in the living and working conditions of the masses can be achieved under capitalism. The only thing they do not believe in is the ability of the working class, the majority of society, the real producers of all wealth, to run society without that minority of parasites living without working, that is, without the owners of banks, big land owners and capitalists. For them, this is the only thing that seems impossible, unreasonable and contrary to all laws.

The revolutionary perspective to achieve the final victory 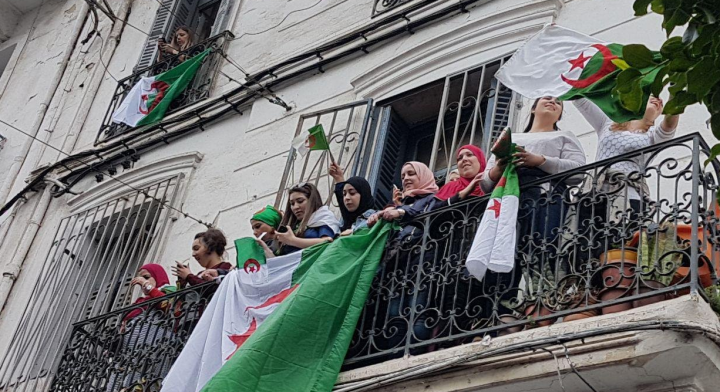 Let us be clear: In the current situation there is absolutely no possibility of building a bourgeois democracy in Algeria, like those we’ve seen in the advanced capitalist countries after the success of the bourgeois revolutions. The Algerian bourgeoisie, like its counterparts in the former colonial countries, is weak, parasitic, and has entered late on to the scene of history. This means it can never play the same role as the bourgeoisie in England or France did in the past. The bourgeoisie in Algeria, and its political representatives from the liberals, reformists, Islamists, etc., are totally incapable of carrying out the tasks of the bourgeois-democratic revolution. At the same time the crisis of world capitalism today does not give any room for the bourgeoisie to give the necessary economic concessions which could form the basis for a bourgeois democracy as we know it in the advanced countries. In fact for this same reason bourgeois democracy in those countries is also going through a crisis.

This task, in our time, falls on the shoulders of the Algerian working class. The working class today represents the majority of the population, and it’s a young, strong and self-confident class. It is the real producer of the wealth in factories, oil wells, mines, ports, railways, airports, etc., and the only one capable of leading the rest of society – the oppressed, poor peasants, petty bourgeois and downtrodden layers – to seize power and achieve democratic demands. At the same time as this, however, they would not be able to wait and will raise demands of expropriating the property of the landowners, capitalists and imperialists and placing them under the democratic control of the workers themselves according to a plan that serves the interests of society as a whole.

But if the working class does not seize power, and the revolution stands in the middle of the road, all the monsters of the old regime will soon return to capture society and stifle its development.

Therefore, the only way forward for the unfolding Algerian revolution is that the working class take the lead at the head of all other oppressed layers to defeat the ruling gang and its state. They must build a new state, based on trade unions, councils of the working class, poor peasants, revolutionary soldiers and revolutionary youth. Representatives must be democratically elected by councils in factories, neighbourhoods, barracks and villages and controlled by and revocable by the masses at any moment. Only a state like this will be able to implement a democratic socialist plan, which will give bread to the hungry, work for the unemployed and shelter for the homeless. Only a state like this will carry out the slogans of the revolutionary people: dignity, freedom and social justice.

This is the perspective that all revolutionaries must strive to achieve. The first step in the direction of achieving it, is to begin to immediately establish revolutionary Marxist cells wherever there are revolutionary youth and the working class. They must raise the banner of socialism high to help workers and young revolutionaries see it and to rally around it. Ultimately, they must build a revolutionary leadership with the best elements who have led the revolutionary struggle in recent weeks.