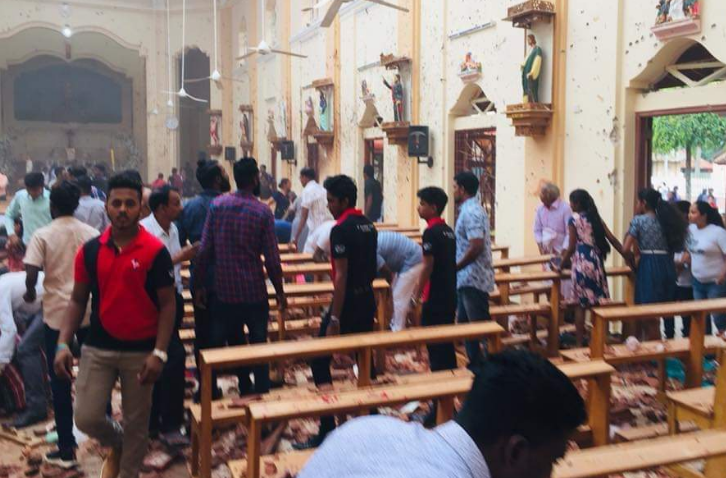 On what should have been a peaceful and calm Easter Sunday, Sri Lanka was hit by a horrific terrorist attack. Churches and hotels across the island were bombed. The explosions were so powerful that church rooftops were torn off and smoke could be seen for miles. The blasts have killed 321 at the last count, leaving as many as 500 injured. We condemn this disgusting and cowardly attack in the strongest possible terms.

The country is now locked down under a curfew, and military services have been granted granting sweeping powers. All of the attacks were carried out by suicide bombers in the Sinhalese populated cities of Colombo and Negombo and one predominantly Tamil area in Batticaloa.

Reports indicate that the group behind the brutal massacre is a local Islamist outfit called the National Thowheeth Jama’th. This group is anti-Buddhist and has in the past vandalized Buddhist statues and temples. The latest news is that ISIS, via the Amaq news agency, has now claimed responsibility; and Sri Lanka’s minister of state for defence has stated that the attacks were a response to the shootings at a mosque in Christchurch, New Zealand, in March.

It has now been confirmed that state officials and police services had received information about plans to attack places of worship on Easter Sunday. Sri Lanka’s health minister reported that on 9 April, the chief of intelligence had written a letter and sent it to police services, listing the names of the members of the terrorist organisation that was planning such attacks. Among the groups listed was precisely the now suspected Islamist group National Thowheeth Jama’th.

The prime minister and the president are now blaming each other. They have been locked in political infighting since the end of 2018, when president Sirisena tried to oust Prime Minister Ranil Wickremesinghe and bring back Buddhist nationalist leader Mahinda Rajapaksa. Sirisena is hoping to regain a majority in the next election to break his coalition with Wickremesinghe. 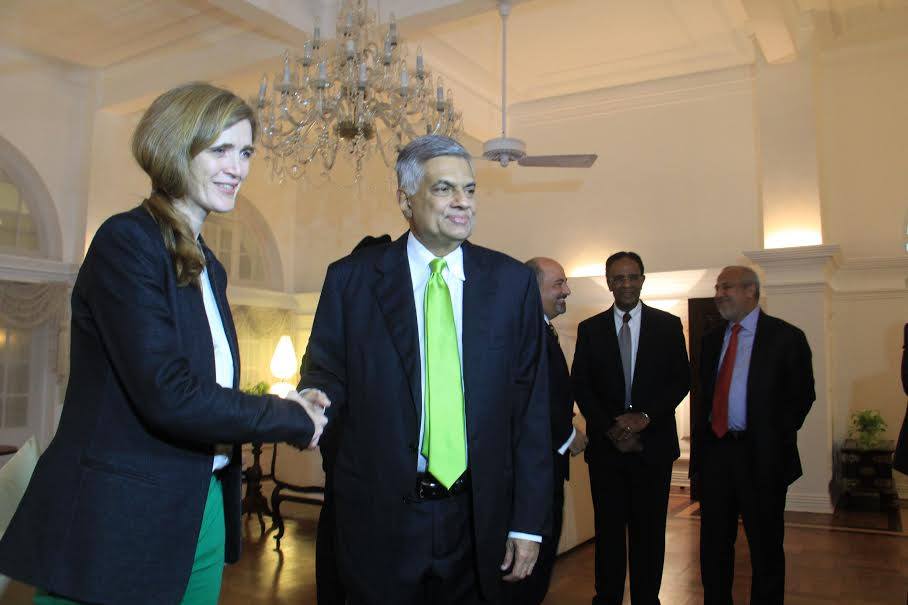 State officials and police services had received information about plans to attack places of worship on Easter Sunday. The prime minister (pictured) and the president are now blaming each other / Image: U.S. Embassy Colombo

Wickremesinghe claims that his cabinet had not received any information of a potential attack. This, he claims, is because they were “not invited to the national security council meetings, which are led by the president [Maithripala Sirisena]” (Guardian). This implies that both the president and the police knew about the impending attack but did nothing. While the politicians are busy blaming each other, the fact is that criminal negligence allowed these horrifying attacks to take place.

It is not only clear that the state is doing little to nothing to protect minorities, but are in fact cynically playing on sectarian sentiments for their own purposes. Rajapaksa Mahinda, who led the campaign to brutally crush the Tamil Tigers, used Buddhist nationalist rhetoric to rally supporters. There have been countless acts of sectarian violence since the end of the civil war in 2009, which many working-class and poor people had hoped would end ethnic and religious strife on the Island.

Mahinda’s rhetoric instead carved out space for extreme Buddhist nationalist groups like Bodu Bala Sena that have been targeting Sri Lanka’s Muslims and Christians since 2012. [See “'Fascists' in saffron robes? The rise of Sri Lanka's Buddhist ultra-nationalists”] Nationalist groups instigated violent anti-Muslim riots and attacks against Muslim communities in both 2014 and 2018. In 2014, at least four people were killed and 80 injured in these violent attacks. Homes, businesses, mosques, nurseries and factories were burned, displacing up to 10,000 people (8,000 Muslims and 2000 Sinhalese). These riots followed a series of rallies by Bodu Bala Sena.

In 2018, a state of emergency was declared after Buddhist mobs attacked and burned down Muslim mosques, businesses and homes in retaliation for a Buddhist man being attacked by a Muslim mob. Two people died from these attacks. Reports stated that police forces watched and did nothing as homes and businesses burned. [See “Sri Lanka struggles to halt days of Buddhist riots”].

Christians have also been attacked and intimidated by nationalist and fundamentalist groups. According to the National Christian Evangelical Alliance of Sri Lanka, an organisation that represents more than 200 churches, there have been 26 reported incidents of discrimination, threats and violence this year. In 2018, there were 86 reports, yet the state has done nothing to investigate these hate crimes. [For a more detailed account of such attacks, see “Ominous rise in attacks on Sri Lanka’s Christians”]

The old colonial method of divide and rule continues to be used by the Sri Lankan ruling class today. Anti-Muslim rhetoric is easy to use and distracts workers and youth from the real crisis facing the workers and poor of the island. As of 2018, nearly 45 percent of Sri Lankans live on less than $5 a day. The Tamil populations in the Northern and Eastern provinces are suffering an especially dire situation.

About 85 percent of Sri Lanka’s poor live in rural districts. These districts face bouts of drought, making farming immensely difficult, and many of these districts do not have adequate schooling and hospitals. The Sri Lankan economy, on the back of Chinese development, had an annual growth at 6.4 percent in the period 2003-2012 period, but it hit a 16-year low in 2017 at 3.1 percent. On top of this, there is rising inflation (now at around 6 percent), high interest rates (over 10 percent) and increasing debt, which by 2016 had already reached over $60 billion, forcing the country to seek IMF and World Bank bailouts, which of course came with strings attached, such as tax and VAT increases, unloading the effects of the crisis onto the workers and poor. It is in this context of growing social and economic crisis that one can see how the ethnic divisions of the country are being used to create conflicts among the workers and the urban and rural poor.

The ethnic/religious divide is roughly as follows: Buddhists, mainly Sinhalese, make up around 70 percent of the population; Hindus, mainly Tamil, 13 percent; Muslims, mainly Moors and Malays, 10 percent; and Christians, both Sinhalese and Tamils, around 7 percent. 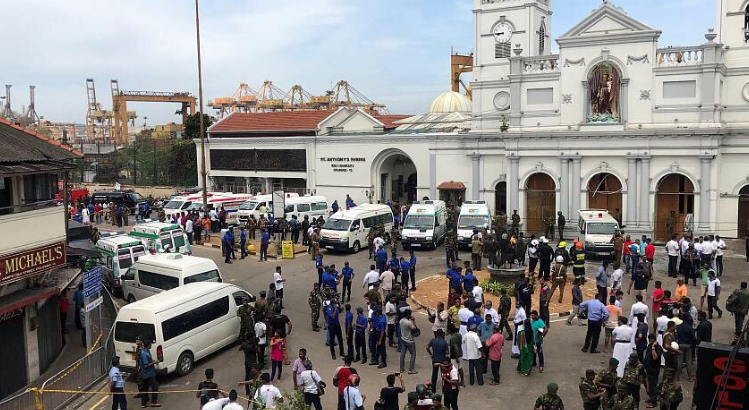 In the unstable economic situation, bourgeois politicians are attempting to whip up religious and ethnic tensions. Meanwhile, the main imperialist powers have been crying crocodile tears over the victims / Image: fair use

In the period 1983-2009, Sri Lanka lived through civil war involving a conflict between the Sinhalese (Buddhists) and Tamils (Hindus), with the Tamil Tigers trying to break the Tamil territories away from Sri Lanka. During that period, there were 115 suicide bombings, so what happened at Easter has brought back the memories of that past conflict, leading many to be concerned that the old conflicts could be coming back.

In this unstable situation, we see bourgeois politicians attempting to whip up tensions even further. For example, in India, Narendra Modi and his ruling reactionary right-wing nationalist Hindu party Bharatiya Janata Party (BJP) have tried to use the attacks in Sri Lanka to garner support in the ongoing elections.

Meanwhile, the main imperialist powers have been busy crying crocodile tears over the victims in these attacks. US Secretary of State Mike Pompeo stated in a press conference that “Sri Lanka’s attack is America’s fight” against Islamic fundamentalism and ISIS. Theresa May, Macron and Netanyahu have also rallied to the cause. This is sickening hypocrisy when it was precisely American imperialism, along with European imperialism, that historically created and propped up Islamic fundamentalism to combat the influence of the Soviet Union in Afghanistan. The so-called “Islamic” terrorists have little to do with religion, and are in fact often being used as guns for hire in the vile wars and operations carried out by big and minor imperialist powers alike.

The attempt to sustain divisions between the majority-Sinhalese population and minority populations of Tamils, Muslims and Christians on this small island has been a historical necessity for the Sri Lankan ruling class ever since British colonists granted independence in 1948. They use sectarian and communal violence and nationalist rhetoric to keep the working class divided in an attempt thereby to stop them from taking the road of united struggle.

It is the task of Marxists to expose the ruling class when they hypocritically pretend to take on the fight against “extremism”. It is the same ruling class that has not held back from unleashing Buddhist fundamentalist extremists against Hindus when this suited their agenda.

Ordinary working Sri Lankan Muslims are, just like their Buddhist and Christian class brothers and sisters, obviously revolted by these attacks. If Islamic fundamentalist groups are organising in Sri Lanka, then the working class and the labour leaders must mobilise to purge these fringe elements from society and make it clear they are not welcome. 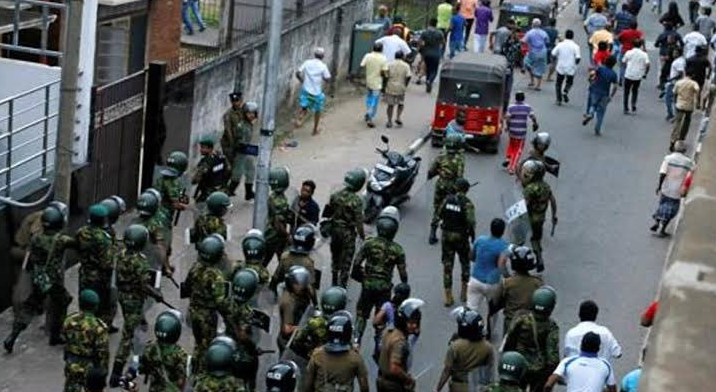 Only through fighting landlordism and capitalism in Sri Lanka, and against the schemes of the Sri Lankan state and the ruling class, is it possible to end the scourge of terrorism once and for all / Image: fair use

The working class of Sri Lanka has a proud tradition of class struggle going back to the 1930s. It had a strong left tradition, which was unfortunately severely weakened because of collaboration and compromise with the capitalist class. It was the failure of the left to offer a way forward that prepared the ground for the reaction of the civil war and all barbaric inter-ethnic conflict that came with it.

The fight to end terrorism and mend the scars of sectarian violence can only be carried out through united struggle by Sri Lankan workers and youth from all backgrounds. Only they have a genuine interest in ending this violence that costs them so much.

Only through fighting landlordism and capitalism in Sri Lanka, and against the schemes of the Sri Lankan state and the ruling class, is it possible to end the scourge of terrorism once and for all. The resources of the island, that are today squandered by the current rulers, within the framework of a nationalised and democratically planned economy could be put to use to end the poverty and suffering among all minority groups of Sri Lanka, thus preparing the conditions for a harmonious development of society. The fight against the scourge of terrorism is, therefore, the fight against capitalism.