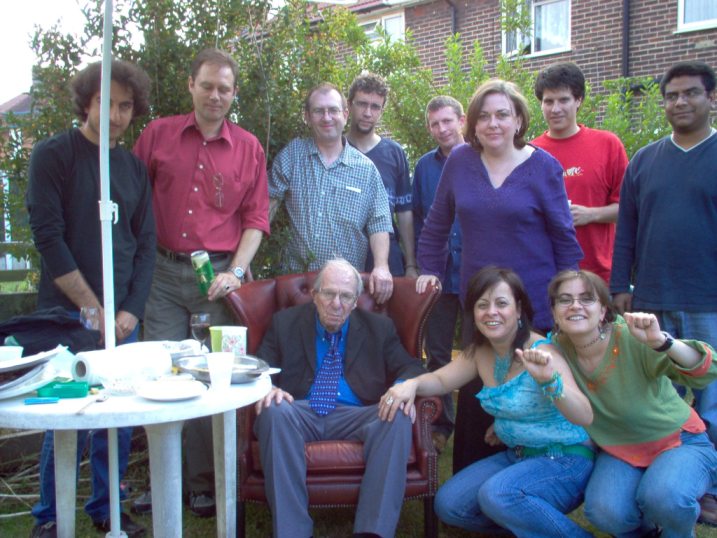 Last Saturday, Ted Grant celebrated his 92nd birthday in East London together with a few comrades. On this occasion Ted wanted to take the opportunity to send greetings to all comrades, young and old. (July 11, 2005)

“Well, as you know I am not too partial about birthdays, especially my own, as you know. You are as young as you feel, and I have always felt young at heart given the confidence in our ideas and the ability of the working class to change society. I am only twenty-one, as you know, well, maybe twenty-two this year. Nevertheless, the occasion gives me I suppose the opportunity to say a few words and send greetings to all our comrades, young and old.

“The world has never been so turbulent. The events in London a few days ago illustrate the point. And this is just the beginning. The imperialist powers, whilst squabbling amongst themselves, are determined to maintain their grip over the world. This is especially the case with American imperialism. However, their actions create a backlash amongst the downtrodden masses of Asia, Africa and Latin America. The unfolding revolution in Venezuela is a sign of things to come everywhere. In Europe too the attempts to make the working class pay for the crisis of the system is causing a reaction. The crisis over the European Constitution is but a symptom of the general crisis facing capitalism. The post-war consensus is over. Mighty class battles are on the order of the day.

“We have a colossal responsibility on our shoulders. We have to raise ourselves to the tasks posed by history. We have done tremendous work in establishing ourselves internationally – in a modest way – as a beacon to the best workers, intellectuals and youth. This augurs well for the future. Only on the basis of Marxism, under the banner of Trotskyism, which represents Marxism in the 21st century, can the future of mankind be assured. Victory to the socialist revolution! Long live the ideas of Marx, Engels, Lenin and Trotsky!”