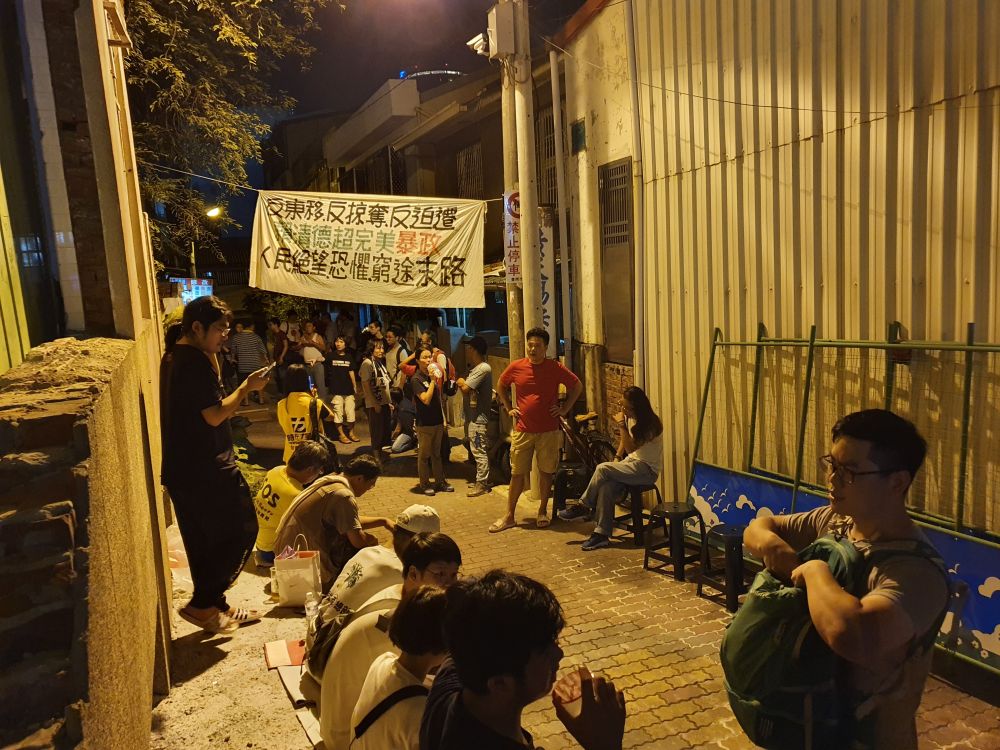 In the supposedly “democratic” Taiwan, we have always been told that private property is sacred. In reality, it is only the rich and the corporations that enjoy guaranteed right to private property, while the property of the poor is readily taken away when the ruling class wills it.

In recent years, the Taiwanese government has used “urban renewal projects” as a justification for the undemocratic expropriation of housing and land belonging to the poor in order to transform the land into profitable real estate properties. This has been done consistently under both KMT and DPP governments. The land expropriation that the Tainan City government has attempted to carry out over the past six months on the grounds of shifting the railway line is one example that has received national attention.

The government's overbearing actions have also met with fierce resistance. On 23 July, nearly 100 people successfully stopped the Tainan City government from forcibly evicting and demolishing the home of the elderly Chen family, one of the would-be victims of these profiteering land grabs. The activists, including a member of The Spark (the Taiwanese organisation of the IMT) descended upon Tainan from all over Taiwan to help at a moment’s notice. 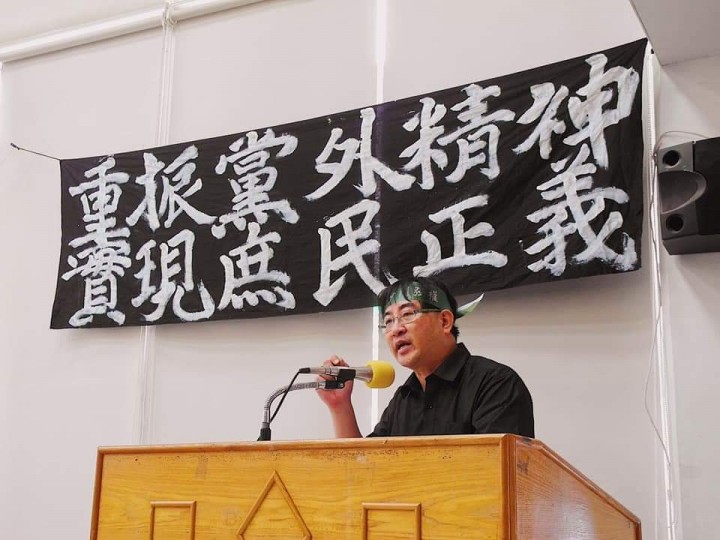 Prof. Chen Chih-hsiao, a family member of the affected households and president of the Taiwan Land Justice Action Union, said that the government intends to use the profits from the “land development” to fill the deficit of the certain departments and serve the interests of the corporations. In an interview with The Spark, he explained:

“In 2007, the DPP’s mayor of Tainan Hsu Tain-tsair requested central government’s approval to shift the rail eastwards, claiming that this could increase the government’s revenue…

“After the Tainan city government requested the central Executive Yuan to approve this project, the Executive Yuan held an internal meeting that included the Railway Bureau. The Railway Bureau thought that the project was feasible, but the rail business under its management was over $200 Billion NT (around $6.8 billion USD) in the red. It needed some land profits to recoup the losses. In other words, the Tainan city government must share the profits from shifting the rail eastward with the Railway Bureau.

“Where do these land profits come from? They come from pillaging the land of the people. Currently, the rail project impacts over 8.1km of land, requiring 400 houses be demolished and a further 1000 houses would be affected.”

Despite Taiwan's apparent “democratic system based on rule of law”, these attacks on the poor are carried out through rather undemocratic means. The central and local governments finalised the project while those who would be affected were left in the dark, and when the residents were informed, they had no choice but to negotiate compensation with the government and accept the fact that they would be forced to relocate.

The government has also withheld all the details of the project from the public, providing perfunctory answers at best and obstructing attempts to understand the truth, especially to those who attempt to review government records that are supposed to be public. As Chen illustrated:

“Sometimes, the state officials only allow you to read 20 pages (of the documents) a day. Sometimes, the government would bundle over 70 documents into a single package, and the readers have no idea whether they’d find what they are looking for in it… many documents are 100-300 pages long, how would anyone know where to begin? Many readers were unable to find the relevant information as a result.”

The hasty way these land expropriations were enforced also produced absurd situations. Another affected resident Huang Chun-hsiang, who was originally asked to surrender only a part of her residence’s land without having to move, was informed only a month before the demolition date that the government would also remove the stairs of her remaining house, effectively making the dwelling uninhabitable and putting Ms. Huang and her elderly mother in danger of becoming homeless. Although Ms. Huang persistently refused to be pushed out by the government, in the end, she was forced to sign a contract to surrender her house in the presence of the police.

In fact, this kind of land expropriation has been taking place around Taiwan over the years, regardless of which party is in government. For example, in the early 2010s, the KMT-ruled Miaoli County government forcibly confiscated large tracts of land in Dapu for the development of a high-tech industrial park, but today there are only a few buildings that were built by land developers after the expropriations that remain empty. Professor Chen pointed out that state bureaucrats like Charles Lin, the current vice mayor of Kaohsiung, have also led land-grabbing campaigns all over the country.

Moreover, the so-called “Forward-Looking Infrastructure Plan”, passed by the DPP in 2017, attempts to apply the same land-grabbing policies across Taiwan under the pretext of building infrastructure. This year, the government has also made frequent moves against communities in Taipei, Taoyuan, and Hsinchu, which are already disputing with the state over land expropriation plans, and the number of affected residents could be as high as 100,000 or more.

The fact that Taiwan's KMT and DPP administrations have successively imposed such outrageous policies on the toiling masses shows that Taiwan's democracy is in fact a dictatorship of the bourgeoisie where only the capitalist class enjoy actual rights. The authorities used the “need for economic development” as an excuse to sacrifice the people's rights and interests, but the actual policies are all measures in favour of the corporations, while doing nothing for the [rising cost of housing] that the masses are also enduring.

In response to these policies, there are some activists who are willing to fight back. “Self-help” associations from communities under attack have been formed, and groups such as the Taiwan Land Justice Action Union and many young people have travelled to various parts of Taiwan to protest or help block demolition attempts. Although the number of people involved in these organisations is relatively small, they have received significant attention. Housing is an issue that is intimately relevant to the lives of every working person. Thus, the government's more ambitious future plans, when implemented, will draw even more attention and anger from the masses.

However, if the movement is to grow in power, it must actively engage more rank-and-file working class people. Linking the land justice and labour movements is both natural and necessary. However, at the moment the vast majority of trade union leaders have done nothing on this issue, leaving small groups of demolition victims and solidarity activists to fight the government with meagre resources.

How to advance the movement?

Nevertheless, struggles can still be organised if the right ideas and approaches are used to speak to the wider masses. However, this also requires a proper understanding that the passivity of the broader population towards this issue isn’t because they lack the ability to resist, rather they don’t see any viable solutions.

In his interview with The Spark, Prof. Chen blamed the majority of the people for the current predicament, saying: ”the government behaves this way today because the people have in a sense spoiled the government and politicians, as well as the people’s own stupidity and lack of awareness of their own class position.”

We must frankly ask: who are the truly “stupid” actors in the situation? In the first place it is decidedly the capitalist class, whose system must rely on the state machinery to plunder the poor in order to maintain profits. Their behavior cannot be stopped until they are removed from power as a ruling class. It is the working class that needs to expropriate property from them to be put to good use for everyone. 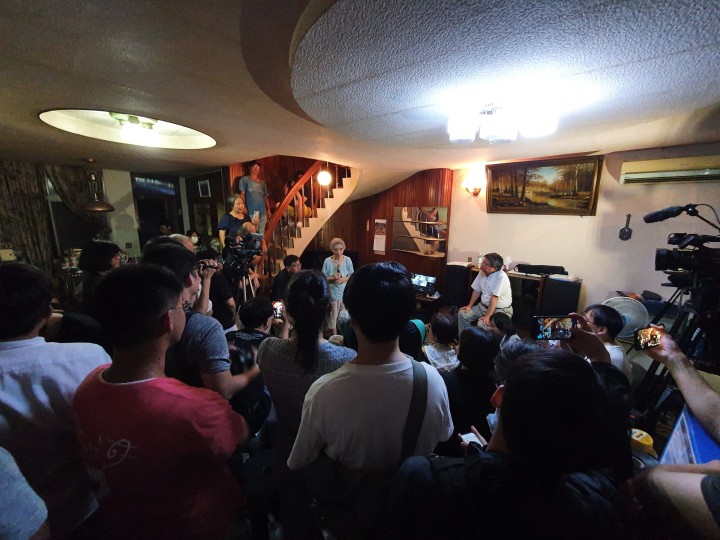 On the eve of the Tainan government’s attempt to expel Dr. Chen’s elderly parents from their own home, a group of activists from around Taiwan immediately congregated in the house at a moment’s notice to resist the forced eviction / Image: Ian Tsai

Without recognising this reality, the various leaders of workers and social movements are confining their hopes to negotiation, or amending the current system in hopes of preserving small scraps for the people. Dr. Chen, for example, suggests that some kind of transparent dialogue between citizens and the government could be the solution to these problems. Not only is the likelihood of this being achieved within the existing Republic of China framework very slim, but even if it were to be achieved in some form, the government would still be the party with executive power. The interests of the ruling class and the working-class masses will always be opposed, and the rulers will never voluntarily give up their existing advantages and positions. Therefore, if a truly fair society is to be created in which people can meaningfully participate in the functioning of society, we believe that the goal of the toiling masses should not be to fight for “parity” with the ruling class, but rather for the toiling masses to take power to run and plan society.

These incorrect perspectives and the snide attitude towards the masses is precisely why the broader masses remain passive on the issue of unjust government land expropriations. The masses do not see any viable solutions or ideas that can really win anything, and on top of that the trade union leaders repeatedly scold them for being stupid. We should instead understand the potential power of the working class to change society, and provide a bold socialist programme that can really provide an answer to the working class. With that, we then need to, as Lenin says, “patiently explain” to the masses the need to take the fight to the capitalist class.

Marxists understand that the world capitalist system today is forcing masses around the globe to ram against it on a titanic level. Whether it is in Lebanon, Chile, the USA, Belarus, or the recent struggles in Thailand, we are seeing workers and youths who hitherto seemed to submit to oppressive systems for years, launching unprecedented struggles as they could no longer endure the hardship. The consciousness of the Taiwanese masses has yet to achieve similar levels. But no ruling class, no matter how cunning, can avert the inevitable sharp contradictions that capitalism creates within society. The Taiwanese workers and youth, who have a tradition of heroic struggles, will certainly stand back up at some point, although we cannot predict exactly when this will happen.

Before this happens, an important task we can pursue right now is to build a revolutionary cadre organisation with sufficient size and resources to explain the need for socialism anywhere we can reach, in an effort to attract like-minded people to our cause. This needs to be built before the masses rise up and fight. If in a future eruption of mass struggles, such an organisation could win the attention and support from the masses, and consistently warn them against forces that seek to co-opt the movement, or the dangers of wrong strategies. On that basis, the masses would gain a strategy to achieve victory and the complete transformation of society.