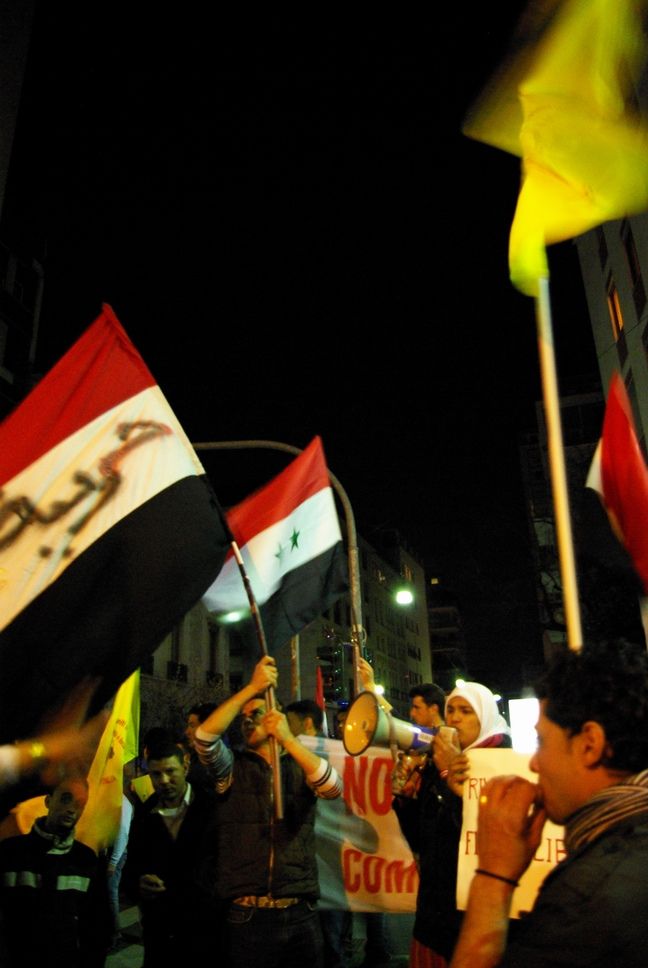 On Tuesday, Vice President Farouq al-Sharaa (clearly alive in spite of rumours to the contrary) announced the President was going to be making a speech which would "make the people happy". Tuesday night came and went, and nothing came from Assad. His media advisor, Buthaina Shaaban, came out and repeated that the emergency law would be repealed, without saying when.

It seemed that the faction which had pushed for reforms from above was on the ascendant, but nothing was clear yet, as Assad had still said nothing since the beginning of the movement. Wednesday saw the redeployment of troops into Daraa, which had earlier been pulled out, and more clashes. The city saw a fierce security crackdown.

It seemed Assad was waiting for the call that the army had cleared the streets, and made his appearance in front of Parliament to cheers, with a crowd of thousands of supporters outside. One paper said sources within the inner circle were all saying his speech would declare an end to the emergency law, and the release of prisoners, as well as a series of reforms legalizing the formation of parties.

When he showed his face, a completely different note was struck. The regime's defiant face was shown, with a speech about the "conspirators" working for Israel to divide the country and incite sectarian violence... Apres moi, le deluge!

The English language media have portrayed him as making a speech full of fire and brimstone, but anyone listening to his speech in Arabic could see that it was a bumbling speech, made by someone who was trying to seem tough, but coming across like a boy president who has hidden his face for the past few weeks. In his speech he was nervous enough that Members of Parliament kept standing up, interrupting him and giving their own speeches about how wonderful he is, provoking awkward smiles from himself and thunderous applause from the other bootlickers.

A leak to a newspaper from the inside said the president had stayed up all night, rewriting the speech, doubtful as to what to actually say, and reversing what was supposedly a much more conciliatory earlier draft. It seems, however, those in favour of drowning the revolution in blood, not giving one inch, are firmly in the saddle. The same insider said Assad was avoiding at all costs the image of granting concessions made under pressure. He did not even give condolences to the families who have lost loved ones. This is classic, and shows the dilemma the regime is in, a dilemma which signifies the beginning of the end.

On the one hand, those within the regime who are arguing for "opening up" are correct, in that without reforming they risk radicalizing the movement, which is at the moment vacillating between calls for reform and cries of "revolution!" But every martyr gives birth to a hundred more Syrians filled with rage. Each funeral is a protest of thousands. And more bloodshed will only guarantee that those family members who did not heed the call to protest will now become the most intransigent opponents of this blood-soaked regime.

On the other hand, Assad and his brother are also correct, in that any concession given now will show to the Syrian people that rising up pays, and that the regime has more to fear from them than they of the regime.

This is not the end of the movement as the Assads believe. They have taken solace in the crowds they managed to bring onto the streets – a mix of people paid and transported by the regime and some who honestly believe Assad will carry out his promised reforms – and will probably take it as license to bring down the fist on the movement. But this will likely backfire. By promising or hinting that there would be sweeping reforms and then delivering none he will have disappointed even his own crowd who will have been wrong-footed and confused, and may even eventually turn against him.

Even amongst supporters, there was criticism that he did not even hold a "moment of silence" for those killed, or offer any such fig leaf. On the contrary, there were even speeches from the MP's saying we are with you Daraa against the “conspirators”! He even came out saying that the people of Daraa love Syria and are fighting the "conspirators", spitting in the faces of the families there and on the memories of the martyrs killed.

It remains to be seen what will happen to his base as the situation moves on. There is an open secret in Syria that his plan is to announce the dissolution of the emergency law, only to replace it with a Syrian "patriot act". If this happens, it will only pour fuel on the flames. Many of those people on the streets, those who aren’t paid to be there, believe, that he is an anti-imperialist, and a reformer, and that buys him room to manoeuvre. How he uses it, however, is what matters. Their support now means nothing in the long run if he cannot meet their expectations. How can he do this? He is incapable of cracking down on corruption, because he would have to confiscate the property of his billionaire cousin Rami Makhlouf to do it. He is incapable of bringing to justice those responsible for the abuses and killings in Daraa, because he'd have to arrest his own brother, Maher al-Assad to do it. So really, in the coming weeks ahead, what can he give to these people supporting him as a reformer? How long can such an image be kept up?

And, while in Damascus and elsewhere across the country, the regime was able to bring out mass demonstrations in his favour, Daraa is lost. The day of his speech, artillery and heavy machine guns were posted at all entrances to the city, keeping media out and residents in, and the streets were completely empty. It was a massive military deployment, and unlike Damascus, the streets were 100% deserted. That is key. Whatever is going on in Damascus, the blood spilt in Daraa cannot be unspilt, and those families will not forget. The only way he can force Daraa back down is through a Hama scenario, i.e. massacring thousands. Latakia has its own martyrs, and so do other towns.

What the regime does today will decide what happens next. They will try to make use of the momentum the speech and the rallies give them to mop things up, but those in the streets now are those whose family the regime has killed, and they will not easily go home. That's a recipe for a major confrontation, and the results of today's events will decide whether we have another Hama, or the carrying of the movement to a higher pitch and wider spread.

Assad may be thinking that stepping up repression would get results like in Hama in the past. But the situation in Daraa today is not like that in Hama back then. They cannot carry out massacres in the dark, with the news carried only by whispers. Any attempt to repeat the event, killing 20,000 or more, will lead to an explosion before the job is done.

This Friday is the Day of Martyrs. The call has been issued for mass sit-ins in squares across Syria. This tactic is taken from the experiences of Tunisia and Egypt, and in and of themselves such mass sit-ins are not enough to remove a despotic regime. It eventually worked in Tunisia and Egypt, but only when the workers moved as a decisive force. In spite of this, such mass sit-ins may mark a new stage in the revolution, and an advance. Friday [today] will bring news, and will probably decide whether the regime can regain the momentum and begin to push people back to their homes by killing some, scaring others, and demoralizing the remainder, or whether the movement will move onto a higher level and push for the regime to go.

If the panicked response of the regime is any indication, the movement is still a serious threat. Yesterday they declared Friday no longer a weekend, and legislated that all workers and students should go to work and school – basically removing the day off – in an attempt to prevent the protests. Even those workers who supported him will not be happy to have their weekend taken away by the boy president. The regime has thus set a challenge: for the sit-ins today to be successful, there must first be a strike movement!