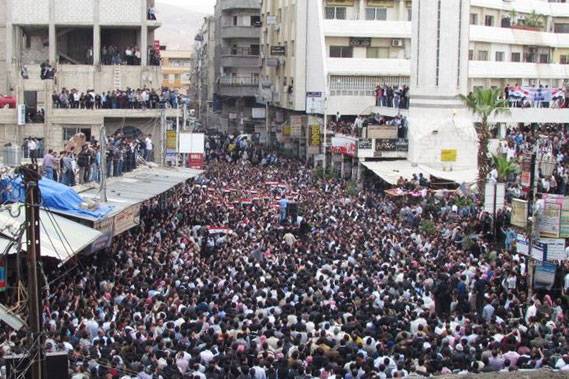 The Syrian revolution has taken a significant and possibly key turn today after what has been a very bloody week. As thousands of protesters once again took to the streets, the regime has unleashed the most barbaric repression, no doubt gambling on the idea that total repression can stop the movement. But cracks are now appearing within the armed forces.

Immediately after airing the speech of the President to the new cabinet the Saturday before last, people in different parts of the country took to the streets to protest with particular intensity in Homs and Latakia. The security forces came down very heavily on them killing many and launching a campaign of arrests in what seemed designed as a message that the people should not read the President’s speech as if the regime were making any concessions.

The repression was particularly brutal in Homs and its surrounding villages; so much so that it provoked a very big demonstration the next day in which people managed to occupy the main square of the city for a few hours and the numbers were in many thousands. The security apparatus dealt with the situation mercilessly evacuating the square with the naked force of arms killing many and arresting many more. They behaved in their usual barbaric manner, following the injured to the hospitals and either killing them there on the spot or abducting them. They even killed people who had come to donate blood. This was a complete and thorough campaign of terror. The Sunday of Jalaa – April 17, official independence day (Eid Al-Jalaa) which activists dubbed the Sunday of Al-Jalaa , the “Sunday of Departure” – also witnessed widespread protests in many other parts of the country)

After that bloody weekend last week was relatively quiet with sporadic protests here and there including in the universities of Damascus and Aleppo. Last Wednesday we saw the first signs of the organized working class beginning to move, with the trade unions in the Governorate of Darr'a severing all their links with the Ba'ath party. On Thursday Asad lifted the Emergency Law in preparation for the Great Friday that activists called for people to protest on. Great Friday is the Arabic name for Good Friday, activists choosing this day to refute the regime's propaganda about the Islamist nature of the movement.

Lifting the Emergency Law, however, did not help as this Great Friday proved to be absolutely the bloodiest day in the course of the revolution as around 120 were murdered by the security forces on Friday and the following Saturday during the funerals of the martyrs. The killing was especially brutal in Darr'a and its towns and provoked two resignations among the Darr'a Members of Parliaments that were followed by a number of resignations from the governorate council of Darr'a.

The hysterical reaction of the regime continued yesterday. They besieged the town of Jableh near Latakia, killing at least 10 and arresting many more. However, the most important development came at dawn the next day [Monday, April 26] when very large numbers of security forces, backed up by army units, entered Darr'a and started shooting at people who were out for the dawn prayers and then randomly shooting at residential buildings. This was accompanied by a very dense deployment of security forces in the towns surrounding Damascus, such as Douma and Mouadamieyah (which have been besieged for many days), and a campaign of shooting and random arrests.

It seems clear from all this that the regime – in spite of its moves to accommodate to the “market economy” – is still very rooted in its previous Stalinist traditions when it comes to dealing with mass protests. It has chosen the road of using the utmost available force to deal with the situation and they are gambling with using the army against unarmed civilians.

Later the Syrian Revolution website on Facebook reported news of a mutiny within the Syrian army but it is impossible to get reliable information on how widespread this was, as Darr'a is still completely isolated. However, a few names of lower ranking officers who broke with their units have already come out, proving that some kind of revolt within the army has indeed taken place. There are also many rumors about entire brigades revolting and engaging with the paratroops in armed clashes, but as of yet nothing can be confirmed, although this would be a logical outcome of the recent developments.

The regime is trying to cover up its military operation in Darr'a by describing what they are doing as a fight against Muslim extremists who according to the regime are behind all the violence in the country. Exploiting the fears and prejudices of different layers of Syrian society, the regime is trying gain some time to deal with the situation with utmost force before it gets out of hand. In doing this it is treading on dangerous ground as it is not clear how the armed forces will react under this kind of pressure and what the balance of forces would be in the case of a major split in the army. The next few days may carry fateful developments for the country and the revolution.