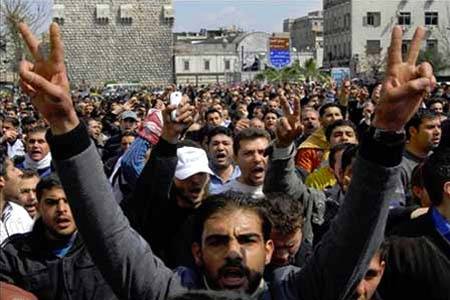 After 9 months of struggle, a major face-off is being prepared and the revolution is throwing all its forces to a single point of attack. For a number of days last week, a campaign for an open ended general strike was waged on all the web pages of the revolution. A call was made also by the Syrian National Council, the General Commission of the Syrian Revolution and other political forces for full participation in the strike. For the first time it looked that the organizers were taking the question of the general strike very seriously, drawing out a plan, and preparing leaflets for printing and distribution. The first date was chosen to be December 11.

The scope of the strike came as a surprise, not only to the regime, but also to the most optimistic revolutionaries. The most significant events did not happen in Homs or Hama, which have been the hub of the revolution until now, but from Aleppo, the biggest industrial and commercial hub in Syria. The massive strike of the Aleppo commercial centre indicated a definite change in the situation. These people are the layers which the regime was leaning on to try to stabilize itself. Even more serious was the partial strike at the largest textile factory in Aleppo, where about third the workers went on strike. Until now the strikes called by revolutionaries have mainly hit small shops but the development of the last few days indicate that the struggle is eventually reaching the level of industrial action. There is even news that some of the small industrialists closed down their factories in protest. The regime is obviously losing its last bases of support.

In the hot beds of the revolution, Homs, Hama, Dar'aa and Idleb, the strike had almost complete participation. No market was open, no student or teacher went to school, government offices were closed and there was no transportation. The towns surrounding Damascus saw a similar level of participation, and the same can be said of the towns surrounding Aleppo. In Damascus itself, neighbourhoods like Barzeh, Qadam, Qaboun, Hajir Al-Aswad and Harasta participated to a great extent. Shops were closed, students did not go to school and transportation was paralyzed. In the working class neighbourhoods of Qaboun and Qadam there were strikes in the industrial areas, which include car and truck repair workshops and small scale manufacturing plants. The eastern part of the country, Der Al-Zor, Bou Kamal and Raqa participated in the strike in different degrees and in the small towns the participating was almost full. Near Homs, in the Has'eya industrial village, the workers of the rock mines were all on strike, which is yet another sign that the struggle in entering the industrial sphere.

Today [Tuesday] we entered the third day of the strike. Most of the areas on strike have managed to keep the strike going despite violence and intimidation from the state security forces. A call has been made for revolutionaries to take control of small neighbourhood streets in their cities tomorrow to prevent the security forces coming in and arresting people. This is to be extended to a takeover of the larger streets and eventually the highways. Government employees are asked not to go to work tomorrow or if they go to refuse to perform work. All this is accompanied by daily demonstrations in neighbourhoods and universities. The Aleppo university saw a number of protests today. The biggest had about 1000 student in the science faculty. The University of Ba'aath (Homs) had no more than 10% of its students attending classes. Operations of the Free Army continue in the meantime and are becoming an increasingly large scale confrontation. Yesterday the biggest deflection yet happened in Dar'aa were 200 soldiers deserted at once. Intense fighting has been going on in Dar'aa, Homs, Hama, Idleb, and the Damascus country side. This yet again demonstrates the low level of morale there must be in ranks of the army.

Defected soldiers celebrating with the mass of people

A very decisive situation may develop in the next few days. A general strike that is gaining ground accompanied by a revolutionary armed uprising by the masses is the answer to overthrowing the regime while avoiding imperialist intervention. The future of the revolution will be decided by the ability of the striking areas to hold on till the rest of the country, and especially heavy industry workers, join the struggle. At the same time it is important to follow up the call for the takeover of small streets by neighbourhood committees with a call for the linking up of the committees on a national scale to take power completely.

Long live the revolutionary struggle of the Syrian youths, workers, farmers and soldiers.

Demonstration in major suburb of Damascus