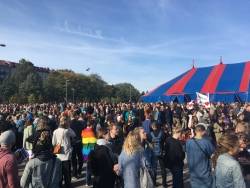 On 30 September, a unified chant could be heard from Göteborg’s Korsvägen: “no Nazis on our streets!” Around 20,000 protesters congregated to oppose the fascist sect NMR, who were staging a demonstration to flex their muscles. By the end of the day, the anti-fascist movement stopped the NMR’s demonstration in Göteborg and even the fascists complained publicly that the day was a “victory for [their] opponents”. This was a major victory for the radical left in Sweden that sent the Nazis running with their tails firmly between their legs.

The NMR (acronym for the Nordic Resistance Movement) was originally founded in 1997 by formerly incarcerated members of the “White Aryan Resistance”. They represent a very violent and fanatical form of Nazism, connected to many assaults, murders and even arson and bomb attacks. Their violent tactics are yet another sign of their complete isolation in society and inability to gain any real support.

Over the last few years they have gained ground due to the collapse of all other Nazi sects in Sweden – which means they now have something of a monopoly. They therefore intended 30 September to be a show of force, with over 1,000 Nazi demonstrators; but instead the turnout was roughly 300-400: not even half of what they hoped for.

The media, both state and private, Swedish and foreign; had advised the public not to go near the demonstration, claiming that it would turn dangerous and violent. Even the US embassy warned American citizens from going to Göteborg, and that "even demonstrations intended to be peaceful can turn confrontational and escalate into violence."

This did not stop the around 20,000 protesters from turning up, in a real show of strength, defying demonization by the right-wing media. The massive turnout even later led the media to admit that it was in the main a peaceful protest. There was a documented fascist presence in the main demonstration, trying to provoke confrontation with the police. They were booed and stopped by other people in the crowd, and later unmasked. 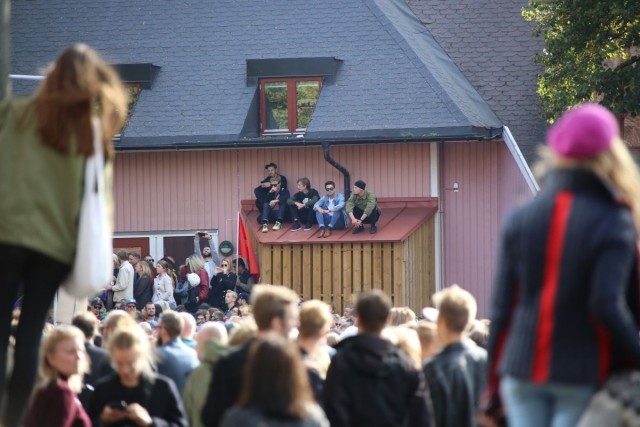 Protestors at the Göteborg anti-fascist demo / Own Work

This fear-mongering wasn’t solely the work of the media, but also the Social Democrats along with their youth branch, the SSU. They believed it would be safer to organize another event away from the NMR rally, and away from the big anti-fascist demonstration, calling it a “mini festival for love” (minifestival för kärlek). At most, roughly 100 people actually attended the event and it was clearly seen by ordinary workers as a waste of time while Neo-Nazis staged a march through their neighbourhoods, all while being protected by the police.

In a country like Sweden, the state previously hasn’t had to be as hard on clamping down on working-class protests, as it was possible for a long time in the postwar period to stave off class struggle through reforms. As such, there are still substantial illusions in the state forces.

Crowds at the demo / Own Work

The media reported that it was the heroic actions of the police that stamped out the Nazis! On the contrary, the disgusting role of the police was shown by their protecting the Nazis and allowing them to parade with banners adorned with Nazi symbols, as well as shields, helmets, and gloves – full riot gear. The police always show extreme leniency to this murderous gang of human trash.

The shutting down of the NMR rally was not thanks to the police, but to the masses of regular people and leftist groups, including Revolution/IMT Sweden, who refused to have fascists parading down their streets. After several hours of blocking the NMR, and simultaneously pushing both the Nazis and police force backwards, the police had to put an end to the demo. Around 20 fascists were arrested, including their leader Simon Lindberg, and the rest were allowed to leave, defeated and humiliated. 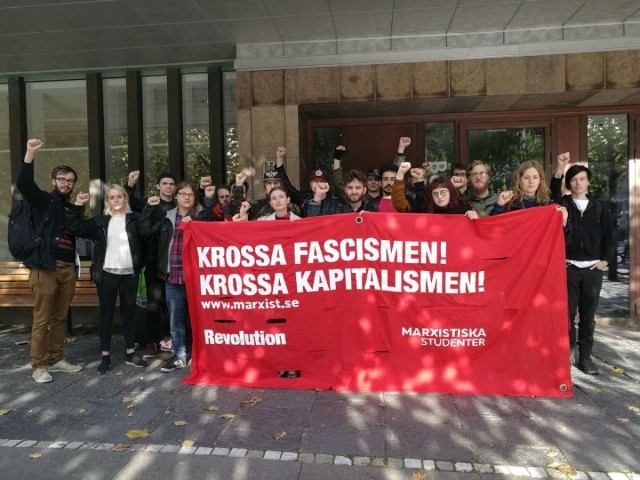 Revolution comrades at the demo / Own Work

We can see a definite polarization in society worldwide. To some, far-right nationalist groups appear to be gaining strength everywhere one looks. But fascism is a specific phenomena and not simply any extreme right-wing or reactionary racist organization.

Fascist organizations use violence with the aim of threatening and intimidating the Labour movement. Today the reality is that the organized fascists only command marginal sects with miniscule forces that would be easily beaten back by an organized mass struggle led by the working-class, as was the case in Göteborg.

It is clear that they are only able to show force on the streets because of the passivity from the Labour leaders who do next to nothing to mobilize against them – and in this case even took part in openly divisive activities. For each Nazi gathering, and every fascist rally, the working-class has tenfold the forces ready to stand in their path.

The NMR, along with most neo-Nazi groups, are a paper thin movement with little sympathy from the masses, with superficial racist arguments that most find offensive and alienating. While in the 1930s there was a definite threat of fascism at large, times have changed. Today we see small groups of nationalists, racists, and sexists huddling together for warmth; not the massive popular support for fascism like the historical movements behind Mussolini or Hitler.

But even small sects are able to intimidate or even kill activists and the NMR has proven its willingness to do exactly that. Fascists are not to be avoided or ignored with hopes of them fading away into obscurity. It is not time to boast of “free speech” for Nazis, but to smash their organizations to rubble with class-struggle. The working class is starting to radicalize, and with that comes the power to flick these Nazis into the trash-bin. 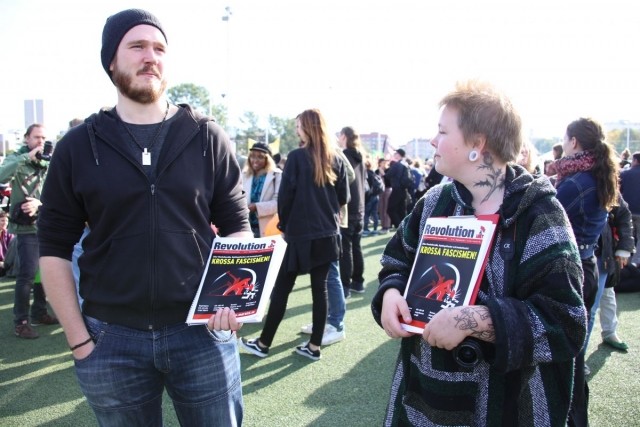 In Sweden, as in the rest of the world, people are searching for Marxist ideas. The working class is thirsty for radical change from decades of austerity, privatisations and declining living standards. Revolution, the Swedish section of the IMT, sold 268 papers at the rally, which had the highly popular title “Smash Fascism” (or “Krossa fascismen!”)

However this radicalization needs direction, and it is imperative that the labour leaders of Sweden (the Social Democrats, the Left Party and trade unions) bring themselves closer to the struggle and not move farther away. The biggest danger is passivity in the face of these forces: we need militant action to beat back the fascists.

This means mass demonstrations and concrete steps to organize self defense. On 30 September the left scored a major victory against rampant reaction, but fighting against the capitalist system that breeds such hatred and for socialism, is the only way to firmly defeat fascism once and for all.