New Zealand
Share
Tweet
After 28 days of being locked out workers belonging to the National Distribution Union (NDU) and the Engineering, Printing & Manufacturing Union (EMPU) at the 3 Progressive Enterprises supermarkets depots have won pay parity across all depots within the next 18 months in one of the bitterest dispute seen in New Zealand in a generation.

After 28 days of being locked out workers belonging to the National Distribution Union (NDU) and the Engineering, Printing & Manufacturing Union (EMPU) at the 3 Progressive Enterprises supermarkets depots have won pay parity across all depots within the next 18 months (national pay bargining if not in name) in one of the bitterest dispute seen in New Zealand in a generation. This means a 19.7 % pay rise for the lowest paid. Workers on the picket line were jubliant at the news and were waving placards  thanking the New Zealand public for their overwhelming support.  The workers are so incensed at their treatment that they are refusing to return to work until after the weekend and are certainly beginning to understand the power that they do have, and will march back into work.  Additionally to this, shop floor workers won a 7% payrise as the employers didn't want a second front opening up on them and the companies 25 meat workers, members of the Meat Workers' Union, struck (who were earning 25% less than the industry standard). This was suprisingly sorted out quickly after months of negotiation! 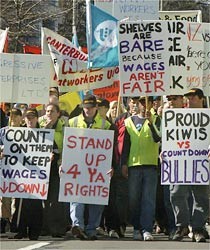 Australian owned Progressive Enterprises, bouyed up by the recent introduction of the anti-trade union laws in Australia, was clearly using this lockout to smash the unions collective bargining power and introduce individual contracts on some of the lowest paid workers in New Zealand. This was clearly to be a testing ground for taking on their Austaralian workers, where you can be sacked for any reason with no recourse. Obviously, the leader of the opposition National Party in New Zealand, Don Brash, welcomed the Howard government's counter-reforms and see it as a green light to further undermine workers' rights and carry out further counter-reforms here if elected.

Without doubt the locked out workers were supported by a large percentage of the New Zealand public, who were instictively and increasingly boycotting the stores, which was also reflected in the large donations to the solidarity fund organised by the Council Of Trade Unions.  Tremendous international solidarity was also shown, in particular from the Australian Trade Union movement.  For example, the New Zealand Port and Maritime Union along with its sister union in Australia made it very clear that unless the lockout was ended they would block all progressive exports at the docks and call on other unions to do the same internationally.

Unfortunately, throughout the dispute the Labour government publically remained silent on the issue.  However, it is quite clear that all the legislation around the individual contracts needs to be abolished immediately, and the government must break with supporting the capitalist market that has delivered low pay to many New Zealand workers by adopting bold socialist policies and take on corporate big business.