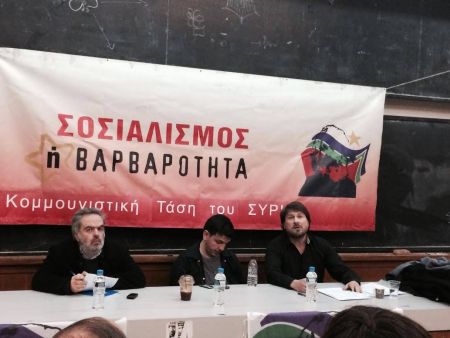 Last Saturday, 14th March, the held a meeting on SYRIZA’s recent deal with the Eurogroup and what the future looks like for the party.  The event was held at the Gini building in the historic Polytechnic area and drew several dozen youth, SYRIZA activists, and workers. The discussion was held to discuss the political backpedaling of the SYRIZA government in relation to the agreement of the Eurogroup and how communists can fight against this conciliation within SYRIZA by arguing for a bold, socialist programme.

Dimitris Belantis analysed the recent agreement signed by the government in the Eurogroup and its political consequences. He talked about the need for establishing a left wing in SYRIZA in order to erect a barrier against the retreats of the leadership in the face of the creditors and to fight for the electoral promises of SYRIZA. This was followed by a very good debate with most attendees participating. Some of the topics discussed were the class nature of the government, its prospects, the risks of a possible failure, and the policy that should be followed. The prospects and tasks of the Left of SYRIZA, the demands that it must put forward to the leadership, its position within SYRIZA, and the joint action of different groupings comrades within SYRIZA were also discussed.

Unfortunately, a group of “anarchists” invaded the meeting area wearing hoods. Their behaviour and methods were very similar to the tactics of police agents as they threatened the attendees and destroyed literature. It was an act of hooliganism that only discredited the anarchist movement. It reflects a practice of violence against different views within the movement which is similar to the methods of Stalinism. Fortunately, other anarchist organizations meeting in a room close to our meeting intervened and the hooligans were forced to leave. This terrorism did not manage to stop the debate, which continued normally after they left. 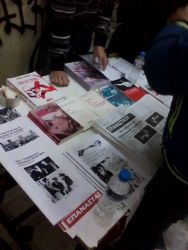