Details
the Rank and File Tendency - www.attawajohalkaidi.com
10 May 2006

Morocco
Share
Tweet
The Rank and File Tendency of the National Union of Moroccan Students participated in this year’s May Day activities. The following is a report of their activities and provides extracts of a leaflet they distributed on the demonstration. 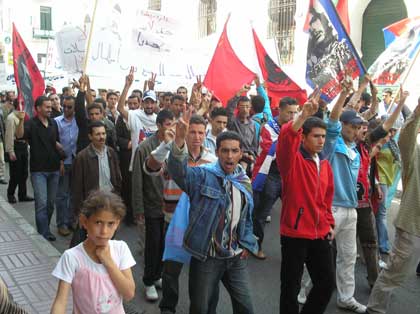 After a successful year of revolutionary socialist activity the Rank and File Tendency (tendance basiste) of the prohibited Union Nationale des Etudiants du Maroc (UNEM) decided to participate in the workers’ demonstration on Mayday.

We provide below large extracts of the manifesto the students distributed on the demonstration which was enthusiastically received by the workers. Other youth and school students who came with their parents also joined the lively contingent of the UNEM. As a result the number of visits to the newly launched website of the UNEM doubled in the days after the May Day demonstration! After exams have finished they will also be organising a meeting at the university to explain and discuss their new program with the students.

We salute you – we who are your sisters and brothers, your sons and daughters. Your comrades in the struggle for a better future, we the activists of the Rank and File Tendency, the workers' current of the Moroccan student movement – on your special international day…” 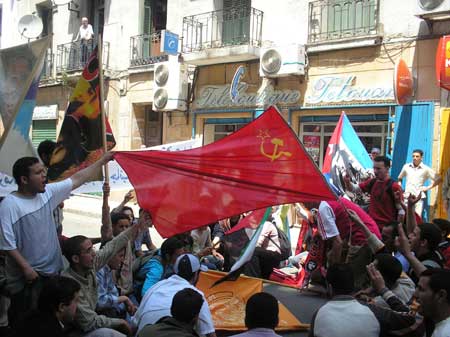 There is not one region in the world which can be described as stable. This is the inevitable result of the agonising capitalist system which proves that the system has not only outlived its possibilities but also that it has become a danger to human civilisation and even to the existence of the human race.”

“Faced with this rotten system, the workers of the world and all the oppressed peoples have stood up in struggle. In all the regions of the world we witness insurrections and resistance.”

The manifesto then goes on and describes the struggle of the heroic Palestinian people, as well as the insurrection in Iraq against the imperialist forces of occupation and their local stooges. The revolutionary struggles in Kashmir led by the Marxists are not forgotten. The youth uprising in the French estates are also mentioned just as the months long struggle of the youth against the employment schemes of the right-wing government. Last but not least the leaflet dedicates a lot of space to the revolutionary process in Venezuela.

This is only a prelude to an analysis of the situation in Morocco.

“The dependent capitalist regime in Morocco is also suffering a profound crisis … In its attempt to prolong its existence it organises all kinds of attacks against our living conditions and our right to work, which is forcing millions of workers on to the dole and to misery. The lack of sufficient housing forces millions of people to survive in the slums. The regime has intensified the exploitation of the workers, offering them miserable wages and forcing them and their children to hunger and malnutrition while the dominant elite get richer.” 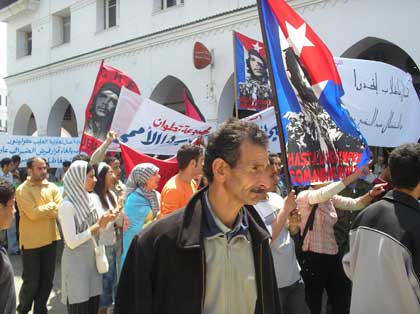 “Millions of peasants without land are hungry and are forced to emigrate while the best land is falling in the hands of the members of the dominant class.”

“In particular the education sector is ferociously attacked with the aim of depriving us – we the children of the oppressed – of the right to education.”

“To protect their privileges and perpetuate our misery the regime modernises its repressive apparatus, imposes reactionary laws and opposes the struggles of the workers and all the oppressed people of the Western Sahara with brutal repression, trials and prison.”

“But faced with this situation the struggle of the people of Morocco and the Western Sahara has accelerated magnificently. We have seen an intensification as well as a qualitative and quantitative extension of these struggles.”

“There is no region in Morocco that has not seen struggles of workers, peasants and of other oppressed layers of society against exploitation, marginalisation and unemployment (Tetouan, Tanger, El Hoceima, Larache, Sidi Ifni and in the Sahara).” 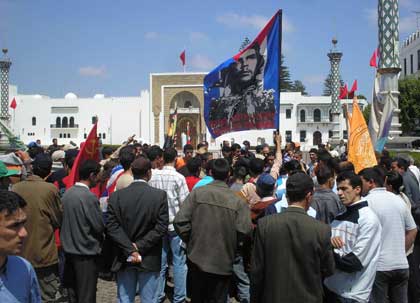 “There was also the struggle of the students in all the universities, the mass struggle against the so-called ‘Education Charter’, against the many attacks on the right to education and for a public, democratic, free, scientific, non-religious, quality education. Those actions were also aimed at lifting the ban against the National Union of Students of Morocco (UNEM).”

The manifesto then explains the activities of the Rank and File Tendency of the UNEM: student activists of the UNEM have been involved in the strikes at the textile factory, Dewhirst in Tanger and the strike of the workers of the match factory, La Fosforita in Tetouan. They proudly stress that their activities at the university are in solidarity with the revolution in Venezuela (see Moroccan left wing youth organise in solidarity with revolution in Venezuela) and they celebrated International Working Women’s Day (see  Left Students in Morocco celebrate International Working Women's Day) under the slogan: “No emancipation of working women without socialism and no socialism without the emancipation of working women.” 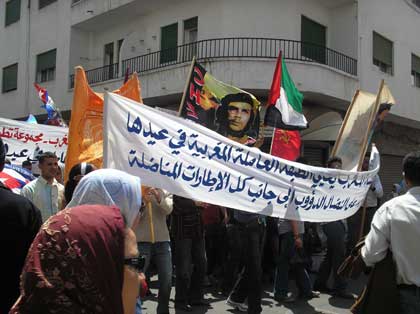 Finally they invite workers, students and all the oppressed to join forces in the struggle against exploitation, oppression and for socialism.