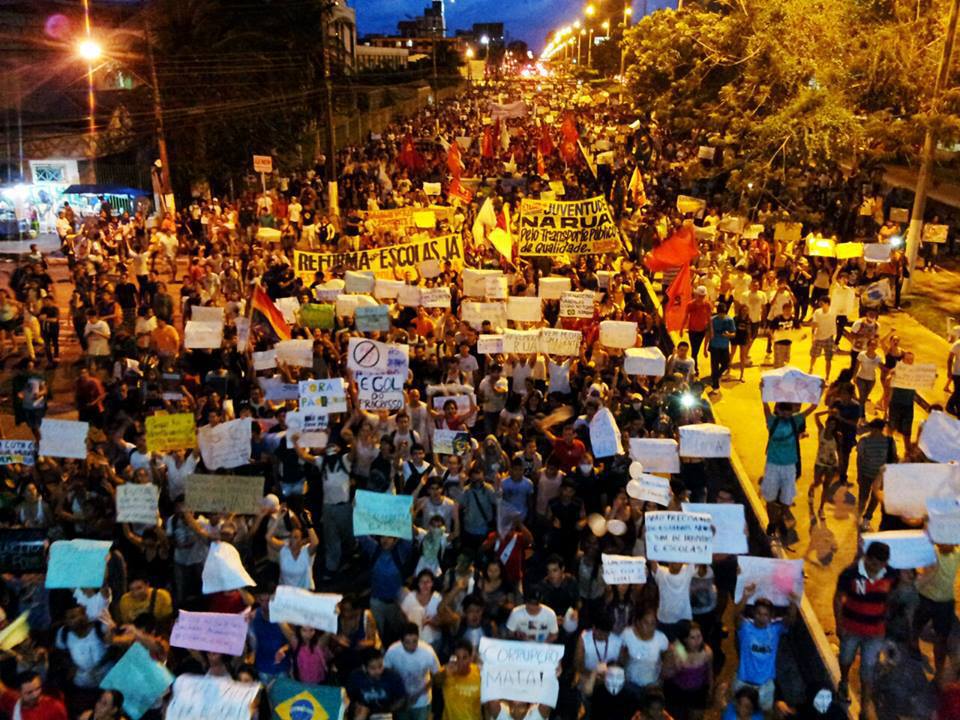 São Paulo: 3.20 reais; Recife: R$3.45; Porto Alegre R$3.05; Goiânia: R$3.00; Curitiba: $2.85; Rio de Janeiro: R$ 2.95. These prices are just a sample of the new bus fares which have increased all over Brazil in the first half of 2013. They have aroused indignation in thousands of public transport users. But in the context of global crisis and popular resistance in many countries, is the anger reflected in the demonstrations only related to public transport?

The economic conditions of life for Brazilian workers have been constantly under threat in the face of the global capitalist crisis. People are not as stupid as some think. They are forced to think about the real state of society when they arrive at the supermarket and see the new price of margarine, or when buying a sofa means mortgaging their wages for months, or when they have to pay the extortionate phone bill. People make the connections between what is happening to the economy, with rising inflation and Brazil’s falling world economic ranking, and the adventures of the Minister of Finance regarding the Gross Domestic Product (GDP).

To understand the demonstrations in Sao Paulo, Porto Alegre, Rio de Janeiro and throughout the country against the increase in bus fares, it is helpful to understand what sparked the Arab Spring in late 2010. In Tunisia the suicide of Mohamed Bouazizi on December 17, 2010 was the spark of the Arab movement. He set himself on fire in protest the seizure of the goods he was offering for sale - his only source of income. This caused a movement against the rising prices in the country. However the movement soon began to add other economic demands beyond that, acquiring a broad character, and people identified with the multiplicity of demands that the movement began to articulate.

Similar spontaneous phenomena appeared later in Spain, with the Indignados at the Puerta del Sol, in Portugal, with the Generation Rasca, and in Greece, with the occupation of Syntagma Square. Another similar example was given by our Chilean neighbours, coming out onto the streets in their thousands to fight for free public education for all. The psychology of young people and workers around the world is approaching a state of exhaustion.

There is a backdrop to all these mobilisations: a worldwide social, economic and financial crisis. This crisis serves as a connecting thread between all these movements, impacting the consciousness of young people and workers around the world.

In March, thousands took to the streets of Porto Alegre, resisted the police and forced the reversal of the fare increase. In June, thousands more took to the streets of several cities, such as São Paulo and Rio de Janeiro, also against fare increases. But surely the struggle against rising bus fares is just a banner that people can use to mobilise for something much bigger?

When the cost of public transport increases, life gets harder for 99% of the population. The hardship is felt especially sharply because the capitalist system is already damaging education, health, employment, culture and more. At the moment, the demonstrations around the country are gathering a few thousand brave protesters motivated by the issue of transportation. What if the movement managed what the Tunisians and the Spaniards achieved or what the Turkish workers and youth are doing right now: to include among its demands the struggles of all the oppressed layers of Brazilian society and call them to the streets? This could trigger a mass movement, with specific demands, but with awareness of mutual solidarity.

The demonstrations which have been announced for next week, across the country and around the world, in solidarity with those struggling against the repression of the movement to stop the fare rises, show that the youth are willing to fight. The international movements of rebellion are playing a key role in this situation. If the demonstrations throughout Brazil were able to unite the broad demands of numerous social movements this would have a big impact. The fight is against the fare increases. Yes, but it does not need to be limited to that.

The youth have entered the scene, almost spontaneously. There is a reason for this: the fare increases are a symbol of the dire situation in which this economic system puts the workers and especially the youth. It is a symbol of something much bigger. Symbols like the fare increases have sparked movements across the world. Why not draw together, in one movement, the other expressions of this system in crisis? One thing is certain: we are beginning our journey down the path of protest that is being followed worldwide.