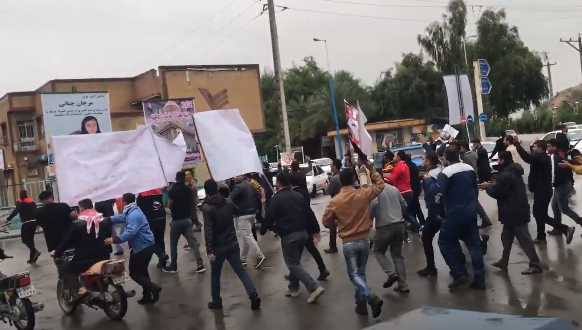 Since August, a strike wave has spread through Iran like wildfire, involving workers across various sectors from the petroleum industry to public services; from Khuzestan in the south-west to Mashhad in the north-east.

The strikes are most concentrated in the oil-rich southern province of Khuzestan, involving the Haft Tappeh sugar cane plantations, petrochemical industries, and oil and gas field workers. It continues to spread, involving (among others) at least 46 power plants and petrochemical companies nationally; railway workers in Khorosan, Arak, Teheran, Karaj; and Coal mines in Kerman. 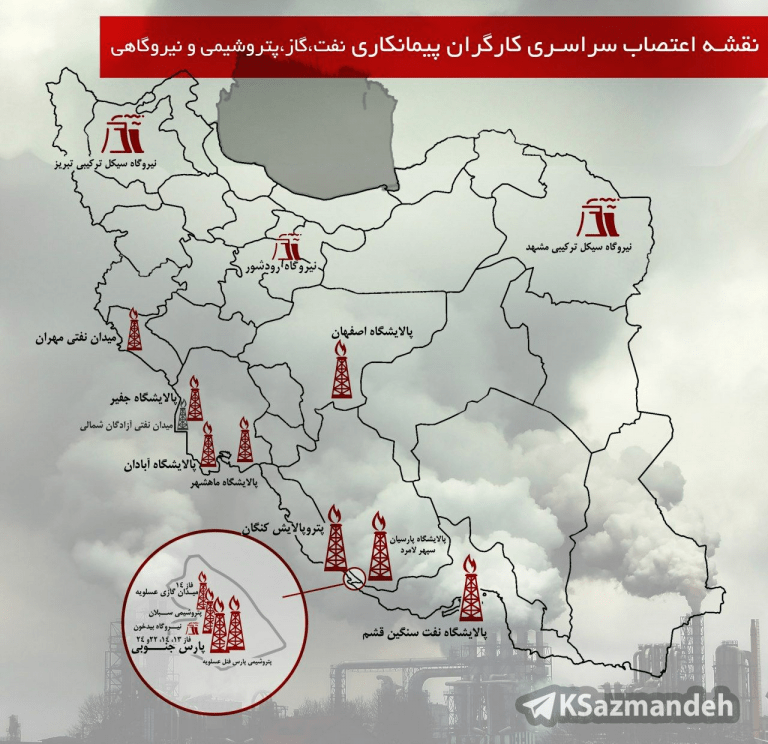 A map of key strikes. There are far more that are not pictured

In the past few years, we have seen waves of mass movements involving strikes, demonstrations and prominently a five-day uprising of working-class youth in November 2019. While the uprising died due to repression and a lack of leadership or organisation, the social crisis fuelling this raging discontent in society has continued to deepen. Inflation is soaring: and it was already 40 percent in 2019. The economy has contracted by 13.1 percent since 2018 and is expected to contract by another 6 percent by end of the year. Many workers’ wages have gone unpaid. While the minimum wage increased by 21 percent to 18.34 million rials ($113), this was rapidly eaten up by inflation. Even the regime admits that, by the end 2020, 57 million out of a total population of 82 million will be pushed below the poverty line.

The COVID-19 pandemic has only further deteriorated the situation, with 14,405 deaths up to July reported by the health ministry. But according to leaked government figures for the same period, 42,000 COVID-19 deaths are known. The real figures are probably much higher, with testing being very limited. The complete u-turn of the Islamic Republic – from denying the threat of the pandemic to shutting down the country in February, only to reopen, fearing economic collapse – has brutally shown the bankruptcy of the regime.

Already, in the Spring, there were a growing number of workers' demonstrations and isolated strikes. Among others, nurses fighting on the frontline against the pandemic have held consecutive demonstrations since March across Iran over unpaid wages and unfair contracts. And on 15-16 July, isolated political demonstrations broke out in Tehran, Isfahan and Behbahan against the planned execution of prisoners from the 2019 demonstrations, but these were swiftly repressed.

Most prominently, on 14 June, Haft Tappeh (Iran’s largest sugarcane company, employing upward to 4,000 people) called for a new strike. For years, the Haft Tappeh workers have been striking and demonstrating against the company’s privatisation in 2015, and unpaid wages. Haft Tappeh has gone through a series of owners; who have all embezzled money and plundered the company’s productive capacity. The radical slogans of the workers such as “spread across the country” in 2018 terrified the regime, who imprisoned the main strike leader.

In the present strike, Haft Tappeh workers are demanding the release of their imprisoned comrades, full payment of their health insurance, rehiring of all fired workers, the imprisonment of their current owner Asad Beigi, and renationalisation. These demands were completely ignored and, on 29 July, Ebrahim Abbasi (a leading member of the Haft Tappeh Sugarcane Workers' Union) threatened: “If our wages are not paid and insurance is not renewed by this evening, we will enter the second phase of the strikes. Together we unite with more workers so that our voice can be heard by the world.”

From Khuzistan to Mashhad

The working class was already at a breaking point before this latest wave of strikes. The death of Ebrahim Arabzade from heat stroke at a petrochemical site in Mahshahr, Khuzestan ignited a strike on 2 August. This rapidly spread throughout the petrochemical industry and by 9 August, 46 plants in 20 cities in 12 different provinces have joined the strike.

And the strike wasn’t limited to one industry. On 2 August, Heptco (an agricultural machinery company in Arak) went on strike, with a similar background of privatisation and embezzlement. From the petrochemical industry, strikes spread to power plants across the whole country. By 4 August the strike had also reached the oil and gas fields.

The regime is terrified of a repeat of 2018-19. Since 15-6 July, “counter-insurgency” forces have entered all major urban centers. At same time, the regime went so far as to try to placate the workers of Haft Tappeh by sending a parliamentary delegation, and invited the union to meet a parliamentary commission. When visiting Haft Tappeh, the delegation was faced by a speech by Ebrahim Abbasi, attacking the state for its smear campaign and imprisonment of strikers on trumped-up charges. When a worker, Adel Sorkeh returned from meetings with the parliamentary commission, he came to the following conclusion: “we have no confidence in the top and we have no hope for such meetings. Our only hope is the force of the workers”.

For a revolutionary general strike!

The Islamic Republic is a guise for rotten Iranian capitalism, which has nothing to offer the working class; except hollow promises and oppression. The regime was already in a complete dead end before the pandemic. Since the pandemic, it has become so desperate that, for the first time in 60 years, it reached out for an IMF loan, which was inevitably blocked by the USA. In 2019, the assassination of General Soleimani was a lifeline to prop up the Islamic Republic on the basis of resisting American imperialism, but now the masses truly have nothing to lose but their chains.

The only limit to the class struggle is its lack of leadership and organisation. Already, workers themselves are organising strike meetings, which should be expanded into strike committees across all industries. Once mobilised, the unified power of the working class cannot be stopped by any force on earth; for not a wheel turns, not a phone rings, not a light bulb shines without the permission of the working class! Only a general strike can bring Islamic Republic to its knees, and only socialist revolution can bring an end to the misery of Iranian capitalism.