The following is a letter, sent to us by a comrade of the International Marxist Tendency, who is visiting Beirut and is an eyewitness to the revolutionary events unfolding in Lebanon.

When I arrived in Beirut 10 days ago for an extended vacation, I immediately tried to get a feel for the political situation and the mood of the people here. I asked my two roommates with whom I was staying what they thought of the prospect of a Lebanese revolution. “Impossible, it can never happen here,” they said, laughing with their characteristic nihilistic demeanour shadowing the hopefulness they carry. “Everything’s fucked but no one does anything.” At their scepticism, I responded, “There will always be a breaking point that will spark a revolutionary movement.” Even though they both actively participate in protests, they said they lost hope after the 2015 garbage crisis protests. “That should have been the breaking point,” they said.

I asked a Communist shopkeeper in an art store, the night before the protests broke out, similar questions, and received similar responses. His excitement was more to meet a fellow comrade than to talk about any prospect of Lebanese revolution. “Tovarich!” He exclaimed excitedly. 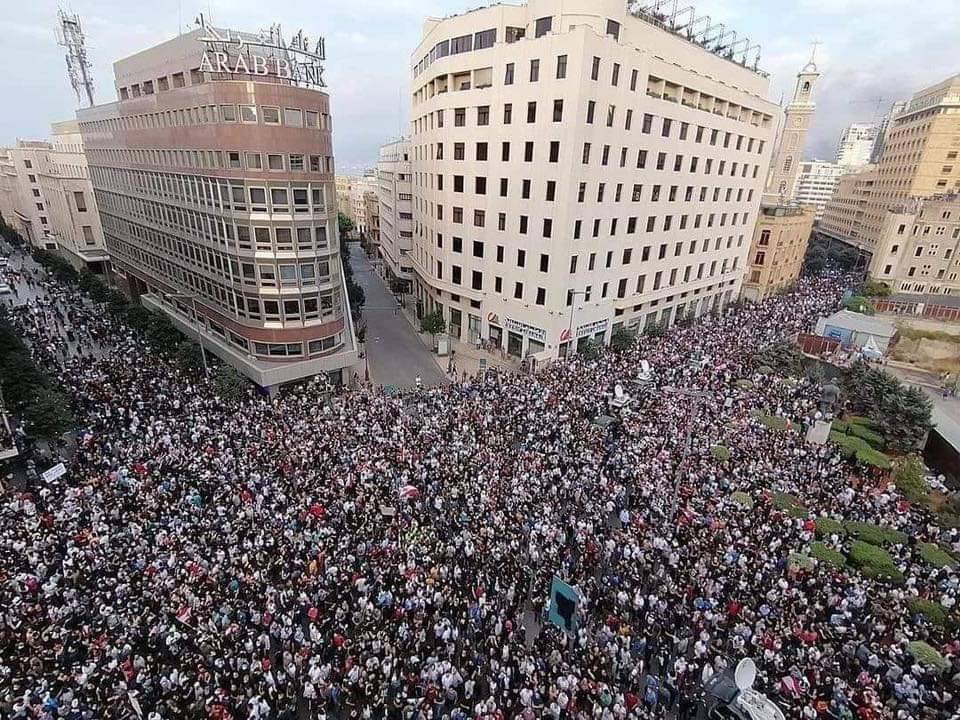 “There will always be a breaking point that will spark a revolutionary movement” / Image: fair use

I spoke with a man, on the first night of protest, as we both stood back covering our mouths from the fourth round of tear gas, watching the scene of thousands of Beiruties courageously taking to the streets to demand the overthrow of the government. “What do you think is going to happen?” I asked. “Nothing,” he said. “Nothing will change.”

The protests broke out spontaneously on Thursday night, after the announcement of a new WhatsApp tax, among other new austerity measures. The politicians and capitalists in Lebanon try to impose more and more austerity, while the working people continue to suffer. Unemployment levels in the country are reaching 30 percent, public debt is 150 percent of GDP, and the minimum wage is $450 with skyrocketing costs of living and the local currency being devalued. This was the breaking point: after years of pent up anger and attacks on living standards, the masses of Lebanon are moving. My roommates were still sceptical at first, asking: “is this real?”

The protests broke out spontaneously on Thursday night, after the announcement of a new WhatsApp tax, among other new austerity measures / Image: Julia Neumann

The first two nights were characterised by spontaneous fires and road blockages, with a crowd of protesters blocking the tunnel to the airport so politicians could not flee the country. Both nights were brought to a violent end with the excessive force of the state police and army, and ended with some rioting and broken store windows at the hands of frustrated protestors.

Over the following days, however, the numbers of protesters have swelled. The numbers yesterday (Saturday) were estimated at 300,000 in Beirut alone, and 1.2 million across the country (out of a population of 6 million). And in the face of brutal force by the state - which deployed tear gas, water cannon, and beatings - the people are on the streets for the fourth day in a row.

"The people want the fall of the regime!" / Image: Julia Neumann

Today, as I write this, it seems there are even larger numbers out on the streets. [According to reports, Sunday’s events saw more than 2 million people take part - ed]. The Lebanese masses are showing incredible determination and courage in their protests to bring down this government. People have had enough, they're angry, they want change and they want someone to be accountable. It is quite evident that many of these protesters are first-timers who have reached their limit.

"The people want the fall of the regime!"

“All of them means all of them, Nasrallah is one of them!” This last slogan broke out after the (once) popular Hezbollah leader spoke yesterday. It is an extremely positive sign that the masses are moving beyond the sectarian political parties. This feeling of unity within the crowd was palpable from the first night. In a country usually fractured along deeply rooted sectarian lines, with people generally very loyal to their own political parties, the notable absence of political party flags is significant. The Lebanese people are clearly starting to blame the entire system and all the politicians who have led their country into crisis, and are fighting together on a class basis.

“All of them means all of them, Nasrallah is one of them!” / Image: Julia Neumann

My roommates reported that the scenes on Saturday were more like a carnival as opposed to the first two nights. My journalist roommate, Julia, spoke to teachers, fishermen, unemployed people, students, young people, and families. The atmosphere was festive, with lots of music and flags. People were reclaiming public spaces and old abandoned buildings, using them as makeshift “parks” to skateboard, roll cigarettes, and talk.

In her interviews with various people, Julia got very consistent responses.

“We are here like all the people, we just want to live, nothing more, only that.”

“There’s no other solution than doing this. The government has to resign.”

“What next? Are there other politicians that could take over?”

Kemal, a 29-year-old with a Masters degree in accounting, hasn’t been able to find work in his field since he graduated over six years ago. “We want our basic rights,” he said. “Food, electricity, water, these are the most important things for any human being, and our government isn’t providing these things.”

“Give the people what they want.”

“We want to live, we need justice!" / Image: Julia Neumann

“Where are you from?” Julia asked him.

“Here in Lebanon, right now, my background doesn’t matter. We are here to get minimum rights deserved by any human being.”

On the first night of protests, action broke out near our apartment in a generally quieter suburban area in south Beirut, away from the commotion of the city. Julia went down to talk to the protesters. They were all young men in their early ‘20s, with the youngest boy being 14.

Ali, 21, who is constantly looking for work claimed, “We are not here in order to demonstrate the WhatsApp taxes. We want water, electricity and bread.”

Others were yelling, “This country is completely fucked up!”

“We want to live, we need justice.”

“They kill us here every day! There is pollution everywhere. There is no nature!”, the young man interjected suddenly. He might have also been referring to the severe forest fires that have raged in Lebanon, which were met with a completely incompetent response from the government. 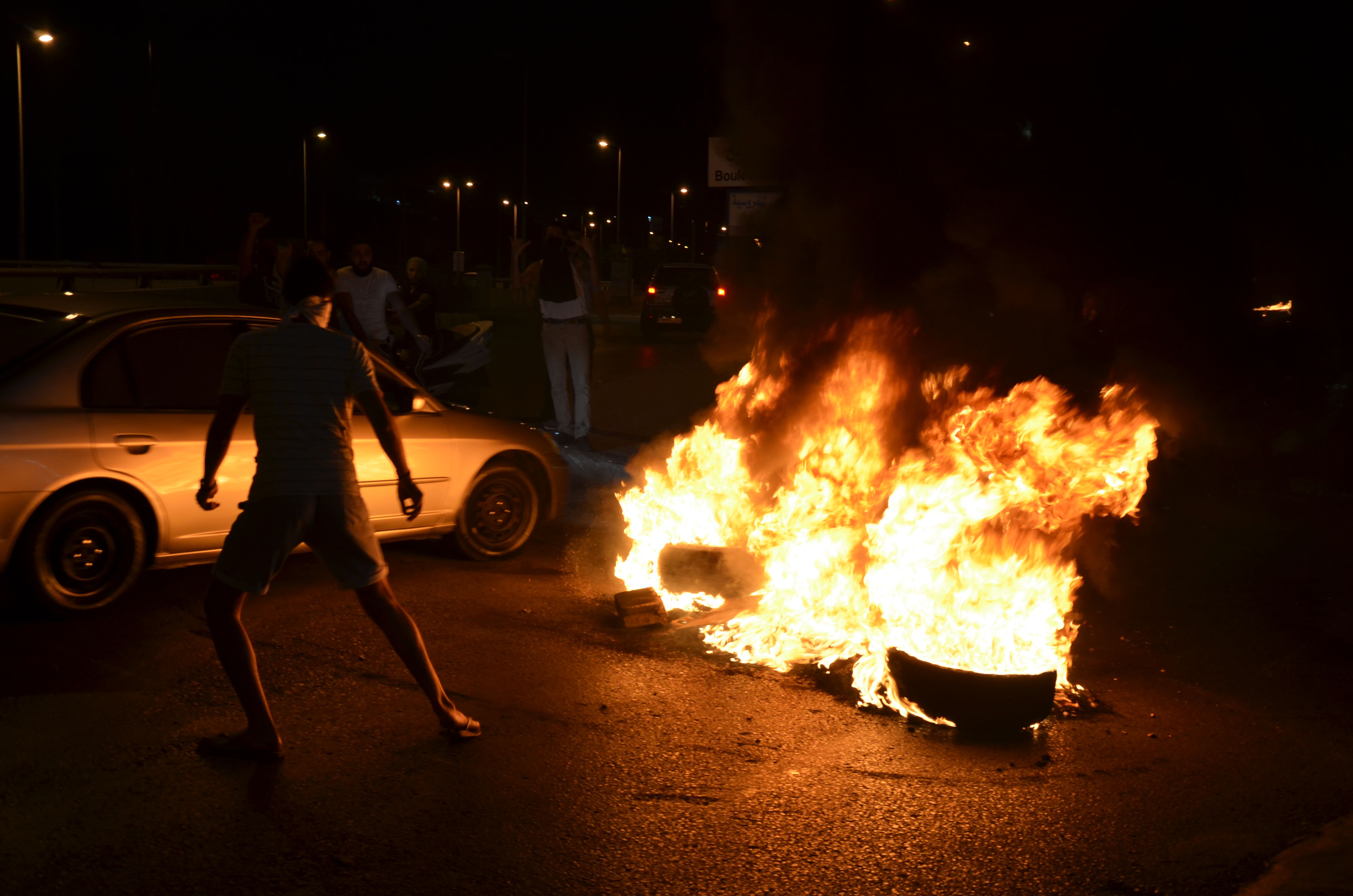 Protests have been spread across the country, in the cities of Tripoli, Sidon, Tyre, Nabatiye, Baalbek, Ghazir and the Beqaa, an impressive wave of anger against the entire political establishment swept over sectarian lines. The geographic reach of these protests represents a massive and significant development in consciousness.

However, there doesn't seem to be anyone showing the way forward. As Trotsky said, the world political situation as a whole is chiefly characterised by a historical crisis of the leadership of the proletariat: the crisis of revolutionary leadership. This is the importance of building a revolutionary organisation.

The geographic reach of these protests represents a massive and significant development in consciousness / Image: Julia Neumann

What is the way forward in Lebanon?

The masses are cutting across religious divisions and standing up against corruption, poverty, and the elite. Some people are calling for a new, secular democratic constitution, without religious and sectarian elements. We wholeheartedly support that!

But that is not enough. PM Saad Hariri's net worth alone is 1.5 billion. Along with another handful of super rich, he and his cronies dominate the whole of society at the expense of the millions of workers and poor. Their wealth should be expropriated and put to use for the benefit of all! The working people should not be paying for the crisis they have been led into by these thieves.

As mentioned, in Lebanon there is a complete vacuum of revolutionary leadership, so it is uncertain how the situation will develop. This government is extremely unpopular and it seems to be genuinely afraid of a movement that will threaten the entire political establishment. Already, four ministers have stepped down.

It is shameful that no working-class organisations, labour unions, or the Lebanese Communist Party have shown any kind of leadership or faith in the working class. These events mark the beginning of a revolution in Lebanon. It must be stepped up by organising a nationwide general strike to bring down this government once and for all. Not a wheel turns, nor a lightbulb shines without the permission of the working class. The working class can only rely on their own strength to move forward. If the government won’t work for the people, the people should be the government!