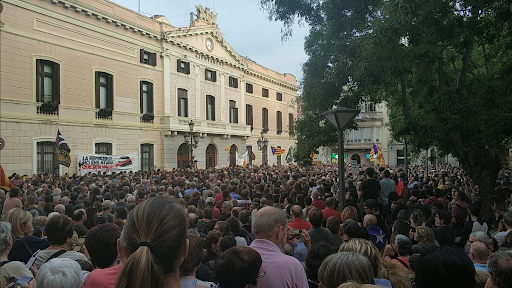 On Monday 9 September, in an operation involving 500 Civil Guard police, nine activists of the Catalan Committees for the Defence of the Republic (CDRs) were arrested, and 10 properties were searched. By the end of the day, two of those arrested had been released and the seven others were transported to Madrid, where they will be presented to the National Court on Thursday. What we are witnessing is an attempt to criminalise the CDRs ahead of the sentencing of Catalan political prisoners, and the expected protests against these sentences in the next few days or weeks.

A press release from the National Court Prosecutor’s Office - under a title referring to a “Catalan independence terrorist group” - states that those arrested will be indicted on charges of “terrorism, rebellion and possesion of explosives.”

Of course, this was reported widely in the Spanish media, which had headlines about explosives, terrorism and the Catalan CDRs. El Mundo, for instance had the headline “CDRs were preparing a terrorist attack in Catalonia on D Day”:

However, if one reads the details of the statements by the Civil Guard and the Prosecutor’s Office, what emerges is the fact they have no proof whatsoever and have not seized any explosives at all. The statement says: “The Civil Guard has arrested nine people related to Catalan independence movements that could be prepared to carry out violent actions” (our emphasis). That is, they have not carried out any violent actions, the police have no proof that they are planning violent actions, but rather they could be prepared to carry them out.

The official statement further says that the purpose of the arrests and searches carried out is “locating and, where appropriate, seizing evidence that evidences the degree of preparation of violent actions.” What this means is that they have no idea whether these people were about to carry out violent actions, but they are going to arrest them anyway and search their houses, in order to find proof, if there is any. This turns the legal process upside down. You do not arrest someone in order to find proof that they are about to commit a crime. You are supposed to have proof, or at least a strong suspicion, before you arrest them.

Finally, the most scandalous part of the statement concerns what was seized during the searches:

“During the aforementioned records, abundant documentation and computer material have been seized for study and analysis.”

This means they have seized their computers. They are fishing for something they have no idea is there. But then we come to the crux of the matter:

“In addition, abundant material and substances have been located, considered precursors for the manufacture of explosives, susceptible (pending confirmation by specialists) of being used in the manufacture of artefacts” (my emphasis).

What this means in plain language is “we haven’t found any actual explosives, but we need to say something that sounds incriminating.” If you read carefully, what they are saying is that they found some materials that they are not even sure can be used to make explosives.

The video the Civil Guard has produced to back up their claims is in the same vein. It shows the police officers entering what looks like an old garage, full of junk, where they find a blue rubbish bag with some soil-looking material in it, a few old pans and an electric cooker. Then one of the officers takes a spoon and casually stirs the contents of one of the pans:

Now, if you are looking for explosives, you send in a specialised explosives team (TEDAX); and above all, you do not touch or move anything that might contain explosives!

During the day, we learned that one of the people arrested was also a member of the organising committee for the local festivals in Sabadell (the town where most of the arrests took place), which took place two weeks ago. The garage the Civil Guard searched was used for keeping materials related to the festival. The local festivities involve fireworks and pyrotechnic displays:

After some newspapers published that the materials found were components used in the making of the powerful Goma-2 explosive (widely used by ETA in the past), the Civil Guard clarified that what they had found were components for making thermite: a pyrotechnic composition of metal oxide and metal powder. That would make sense, and there would be a logical explanation for it, but it would not amount to material for making explosives!

According to some reports, the Civil Guard also found and seized a ballot box used during the 2017 independence referendum. Dangerous materials indeed!

In reality, we can see that a high-profile operation has been launched on the basis of very little or no evidence. There has been no terrorist activity in Catalonia related to the independence movement, nor the CDRs. From all known facts, we are strongly inclined to draw the conclusion that the aim of the arrests is not to deal a blow to a non-existent terrorist group but rather to criminalise the Catalan independence movement and particularly the CDRs as well as an attempt to cow activists preparing mass protests against the sentencing of the Catalan political prisoners. Branding the CDRs as terrorists would make it easier to use police repression and against them, and the calculation is also that that would isolate them from public opinion.

It is not the first time that such a thing has happened. In 2014 and 2015, the Spanish police - under instruction from the National Court – carried out dozens of arrests of anarchist activists in three separate operations called Piñata, Pandora and Ice. In each of the cases, those arrested were accused of “anarchist terrorism” and they were paraded in the media as such. In all of the cases, those arrested had to be released without charges and the cases collapsed for lack of any evidence. In the case of Operation Ice, the police seized materials and substances they claimed could be used to make explosives. In the end, they turned out to be no more than household cleaning products and (wait for it) red cabbage stew!

Ridiculous as these cases might be, the main accused in the Operation Ice, Nahuel, spent over one and a half years in jail in a special facility reserved for dangerous prisoners.

More recently, we had the case of Tamara and Adrià Carrasco, members of the CDRs who in April 2018 were accused of terrorism and rebellion. Tamara was arrested in her home, in the presence of the media, and taken to the National outside of Madrid. Adriá managed to avoid arrest and went into exile in Belgium, where he has been since. A few months later, the National Court dropped the charges of terrorism and rebellion and transferred the case to a local court. The damage had already been done. The media and the right wing had been given scandalous headlines linking the CDRs with terrorism, Adrià is exile and Tamara was confined to her town for over a year, unable to leave it for any reason.

To protest these arrests yesterday, thousands came out in Sabadell, Barcelona, Girona, Reus, Vilanova and many other Catalan towns and cities. The message was clear: “You will not cow us into submission. We would do it again!” These were the images in Sabadell:

The International Marxist Tendency condemns, in the strongest possible terms, this latest round of repression against the Catalan independence movement. We demand the immediate release of all those arrested, without charges. We call on left-wing, revolutionary and labour movement organisations around the world to protest this blatant abuse.

An energetic, international campaign needs to be launched in preparation for the sentencing of the Catalan political prisoners.

See also this statement by the Candidatures d’Unitat Popular (CUP).