The Spanish miners have been on an all out strike to defend their jobs since June 1st. Whole areas of Asturias and Leon have become daily battlefields between the miners and their families and the anti-riot police forces.

The European Union had already forced the end of subsidies for 2018, but this decission of the government has given the struggle a sense of urgency and a common focus.

The strike started on May 23 and it became an all-out indefinite strike on June 1, when 10,000 miners and their supporters marched in Madrid. A number of miners have locked themselves inside the pits and some have gone on hunger strike. The miners have set up burning barricades and blockaded the main roads and railways in the mining regions. The response of the police has been brutal. The special anti-riot units of the hated military police Guardia Civil have been used to try to remove the barricades. Clashes have been fierce, with the Guardia Civil using tear gas and the miners responding with flares and dynamite.

The website Periodismo Humano has done an excellent job in providing pictures and videos of the protests, as a way to try to break the deafening silence of the Spanish media about this heroic struggle:

- this is their report on the battle of Santiago colliery, in the Aller mining valley, on June 7

- this is their earlier report "miners resist their end"

- and this is their report of the clashes on June 12, Resistencia Minera

Here's a VIDEO of the clashes on June 12 in Campomanes:

Here's an earlier VIDEO of clashes in the same area, in Asturias, on May 30:

After the initial clashes, police stepped up repression by going into the mining villages and using anti-riot gear against the population in general, including women, children and the elderly. This has only served to enrage the miners even further. These are close-knit communities which depend completely on mining and are fighting to defend their livelihoods.

The strike has been called by the two main trade miners' unions, CCOO and UGT. It has widespread support in the mining areas and across the whole country. Many are commenting how it was relatively easy for the police to attack the demonstrations and sit-ins of the indignados, but with the miners is a different story.

A general strike in the mining areas has been called on June 18. On the same day an appeal has been made for road blocks and solidarity demonstrations to be organised throughout Spain. 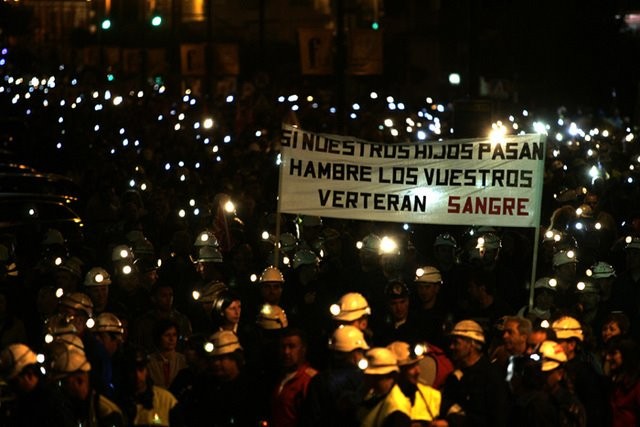 "If our children go hungry, yours will shed blood"Yesterday, June 12, there was an impressive demonstration in León, with 2,000 miners in full work gear with their helmet lamps on illuminating the night, surrounded by tens of thousands of supporters. The main slogan was clear: "Without coal, León will die". The turnout to this moving march surprised the organisers.

Here are some VIDEOS of it:

- the report in the regional Castilla y Leon TV:

- the beginning of the march:

An here's another VIDEO made with a collection of pictures from the miners' lamps march:

Thousands had also gathered on June 5 in Mieres, Asturias, in support of the miners struggle, singing the miners' anthem "Santa Barbara" and then proceeding to pelt the local headquarters of the right wing Popular Party with eggs:

The struggle has received support from the recently created Spanish Miners' Solidarity Committee launched on Monday, June 11 in Sheffield, by former miners and others who were involved in the 1984-85 miners' strike in Britain. This is the text of their message to striking Spanish miners:

The Committee pledged itself to campaign nationally in the UK labour and trade union movement and in the mining community for solidarity with the striking miners and their families in the Spanish Asturias, Aragon and Léon coalfields.

UK supporters of the Spanish coal miners know only too well the consequences – economic, social and political – of butchering the coal industry.

Today there are just a handful of deep mines in the UK. This is all that remains of an industry that even 30 years ago employed more 200,000 men.

In its place, there is only mass unemployment, poverty and  social deprivation and decay. That future faces the Spanish miners if they are defeated

The Committee has also committed itself to raise funds for the families of the striking miners, an effort that has already begun, and maximise assistance to their just struggle.

A letter of solidarity, signed by former miners and miners’ leaders from the main UK coalfields and other trade unionists, has been prepared and will be sent to the Spanish miners’ organisations during this week.

The Committee’s efforts have already won the support of the internationally renowned film-maker Ken Loach who asked us to send this message to those struggling in defence of pits, jobs and communities in Spain..

His message?:  ‘"Not for the first time, it is miners who fight on behalf of all working people. This crisis causes such misery through mass unemployment and attacks on working conditions and the social wage. The responsibility lies with the ruling class and those who defend an intolerable, unjust system. Good wishes and solidarity"

Two representatives of the committee, which was launched by the Miners Info network, will travel to Spain for discussions with Spanish miners and their families later this week.