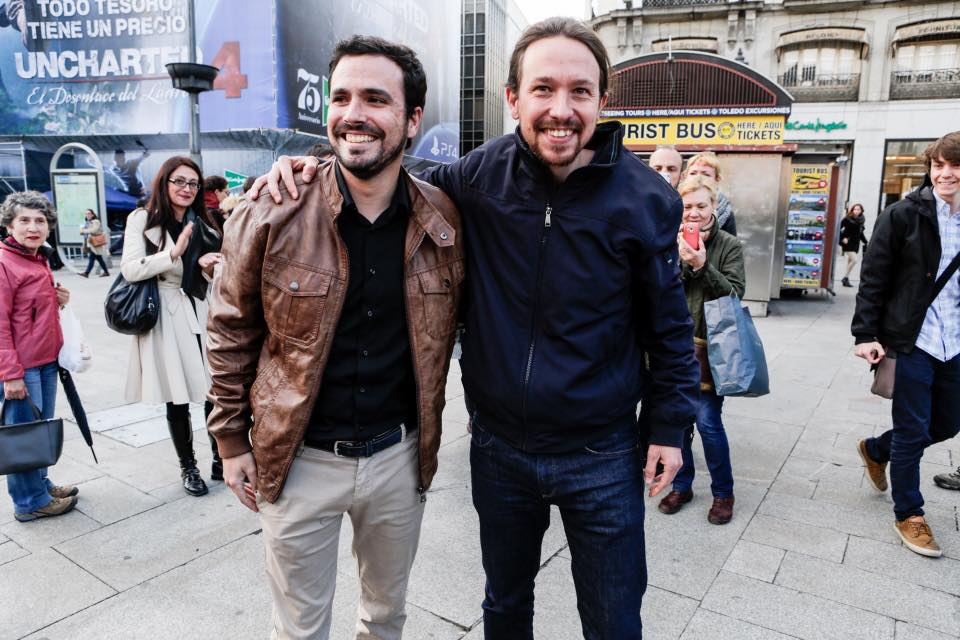 On May 9, an electoral unity agreement between United Left [IU] and Podemos for the country's June 26 general election was announced. Members of both organisations will have a chance to vote on it during this week in a referendum.

The agreement will also include the joint lists which already existed for the December 20 election in Catalonia (En Comú Podem - Together We Can), Galicia (En Marea - Riding the Tide) and Valencia. Already at that time the Marxists of Lucha de Clases argued for a Spain-wide agreement, which was only prevented by the narrow interests of some in the apparatuses of both organisations.

The agreement has been received with enthusiasm by thousands of activists and potentially changes the whole scenario of the June 26 election. This election has been called after there was no agreement to form a government coming out of the December 20 elections. Most of the government formation talks centered around the question of whether the social-democratic PSOE would prefer a coalition with the right wing “reformist” Ciudadanos or forces to its left, including Podemos and IU.

In fact, Podemos skilfully put the PSOE leaders in the dilemma of forming a government of the Left or a government of the Right. This is interesting since the leaders of Podemos had always insisted that Left and Right were outdated categories which were no longer useful and had explained that now it was a question of “those from below, against those from above”.

Those within Podemos and United Left who for different reasons opposed any unity agreement have been defeated.

A mere repetition of the December election was not likely to produce any major changes in the composition of Parliament, which would result in a new dead lock. However, the announced electoral agreement has upset the board. Opinion polls currently show that the adding up of votes of Podemos and IU will allow them to beat PSOE in number of votes and probably even in number of seats. The Spanish electoral system, based on province-wide constituencies, penalized Podemos during the last election: in many smaller provinces represented by  3 or 4 MPs, they were slightly short of the necessary votes to get anyone elected. The addition of IU votes could mean a gain of  15 to 20 seats. It is even possible that the multiplying impact of such a joint list will be able to dispute first place with the ruling Popular Party. The agreement provides for a joint platform but allows both organisations plenty of autonomy to defend other points and to organise their own campaigns independently. However, it is likely that there will be mass joint meetings with Alberto Garzón and Pablo Iglesias and other well known leading figures which will create an electrifying effect throughout the country.

A recent CIS opinion poll conducted in April showed that the addition of IU and Podemos’ direct voting intentions plus "liking" would put them ahead of PP (19.8% for IU+Podemos, 19.2% PP, 18.0 PSOE). Of course it’s still early days (the campaign proper doesn’t start until June 10) and there's still a lot to be done, but the perspective of defeating the hated austerity government of the PP can enthuse a layer of youth which abstained in December, and win over a section of PSOE voters angry at their party's refusal to make a deal with Podemos. Significantly, the same poll shows Podemos plus United Left topping the votes in the age groups of those  between 18 and 55. 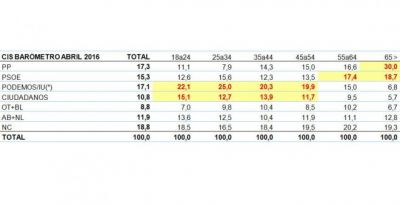 Even if the electoral alliance of Podemos - IU comes second, that will only  put the PSOE in an even more impossible position: they will have to choose between allowing a PP government (and losing even more of their electorate as a result) or entering as a junior partner in a coalition with Podemos, something the ruling class is very afraid of.

We will now see the most vicious campaign of attacks, slanders and lies against the joint list on the part of the whole of the capitalist mass media. They will bring bourgeois politicians and statesmen back from the dead (González comes to mind) to criticise Podemos and IU, as well as warn about the “dangers” for the country if they are elected. An "opinion writer" in the right wing ABC has already described the IU - Podemos agreement as that of "old age Stalinism and juvenile fascism"!!

The Socialist Party leader Sanchez has characterised the agreement as one of the “far left”, while Rajoy has branded it a “coalition of extremists and radicals”. The PP parliamentary spokesperson Rafael Hernando described it as the “alliance between Cuban and Venezuelan communism” and compared it to “the marxist-leninist regimes of North Korea, China, Bolivia, Venezuela and Cuba”. All of that will backfire. We have seen it before.

The program of the United Left - Podemos lists is based on the program both organisations presented in the December elections (which was basically the same): a broad program of reforms, against austerity, the repeal of the worst laws of the PP government (including the Wert education law, the Gagging Law against democratic rights, the last two counter-reforms of the labour law, etc), measures against evictions, slower pace of deficit reduction, more state spending, ...

The enthusiasm amongst thousands of activists and layers of the masses for the Podemos - IU agreement represents the desire for fundamental change, the deep seated opposition to the failed economic system and rotten political regime. The problem is that the program defended by the leaders of both organisations does not answer the key question of where will the money come from to fund such a reversal of austerity cuts.

Spanish capitalism is in crisis. European capitalism is in crisis. The world capitalist system is moving towards a new recession. The EU is already demanding from any new government in Spain a package of 10-12bn euro cuts as the right wing PP government missed the deficit reduction target by nearly one percentage point in 2015. The leaders of Podemos-IU, if and when they reach power, will have to deal with the same question Syriza and Tsipras already confronted: within the limits of capitalism in crisis, no reforms are really possible.

The task of Marxists is to accompany the mass of workers and youth in this process of learning through their own experience, and a necessary stage in that process is the defeat of the PP and the coming to power of Podemos in one form or another. We participate in their struggles, electoral and otherwise, while at the same time patiently explain that what they want can only be truly achieved with the overthrow of the whole rotten edifice of capitalism.