Thousands came out to cheer the swearing in of new mayors in Spain on Saturday June 13, in scenes not seen since 1979 or perhaps 1931. The May 24 municipal and regional elections represented a serious setback for the ruling right wing PP. But the extent of their defeat was not clearly visualised until June 13, when mayors representing parties and alliances to the left of social democracy were sworn in, in 4 of the 5 largest cities in the country: Madrid, Barcelona, Zaragoza and Valencia. The fifth, Seville, was taken over by a PSOE mayor, with the support of Podemos-backed “Participa Sevilla”, and United Left (IU).

In Madrid, Manuela Carmena, a survivor of the 1977 far right Atocha massacre of union linked labour lawyers, at the head of the Ahora Madrid list (involving members of Podemos, United Left and others), defeated the hated right wing Esperanza Aguirre. A series of PP mayors had ruled the capital for 24 years. 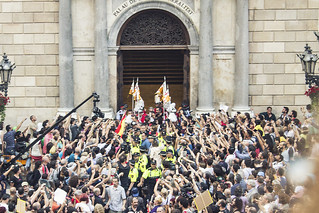 In Barcelona, it was anti-evictions activist Ada Colau, at the head of the “Barcelona en Comú” list (involving Podemos, United Left and others) who defeated the right wing bourgeois nationalist Trías from CiU. In her speech she recalled the humble origins of her family, from her rural poor grandparents who were forced to emigrate to Barcelona where they started working as domestic servants. Thousands packed the Sant Jaume square to celebrate her election. Present, was a Republican flag with the letters UHP (Union of Proletarian Brothers, the slogan of workers’ unity from the 1930s). Many of those attending would have participated in the occupation of Catalunya Square four years earlier, during the May 15 indignados movement, which ended in brutal repression by the municipal and Catalan police.

In Valencia, the left wing Joan Ribó from Compromís replaced the corrupt right wing Rita Barberá from the PP, who had ruled the city uninterruptedly for 24 years.

There were other significant victories. In Galicia, the so-called Atlantic Tide lists won in the key cities of Ferrol, A Coruña and Santiago de Compostela. Having been its traditional stronghold, the PP was reduced to having the mayor in only one out of 7 main Galician cities.

After 20 years of PP rule in Cadiz, the anticapitalist militant Jose Maria Gonzalez "Kichi" was elected as mayor at the head of the Por Cádiz Sí Se Puede list (backed by Podemos). In front of thousands of people, he made a speech in which he paid tribute to the "common people who do everything. They open the schools, sweep the streets, build bridges, make and light lamp-posts. ... They are the heart of the city which allows it to wake up every morning to the smell of bread and churros, and to go to bed every night sheltered and safe.”  And he emphatically added: “We may make mistakes 100 times, but rest assured we will recognise and rectify them. However, we will never be mistaken about which side we are on, faced with those who evict, sack, exploit, cut, hoard and leave a whole county without future." Cadiz, in Andalucia, is the province with the highest level of unemployment in the whole country (over 42%) and one of the places where Podemos is strongest. See video:

In Badalona, the anti-capitalist and pro Catalan independence teacher Dolors Sabater became the mayor, replacing the right wing racist PP mayor Albiol. Badalona, population 180,000, is the third largest city in Catalonia. Sabater stood as part of a Guanyem Badalona en Comú, a list involving members of the left wing pro-independence CUP, Podemos, some members of IU and others. They came second in the election on May 24 and needed the vote of the Catalan branch of PSOE (PSC), left wing nationalist ERC and the Catalan United Left (ICV). Again, thousands came out to celebrate and to give a well deserved farewell booing to the racist Albiol. See video:

In Iruña-Pamplona, the capital of Navarra, the right wing Spanish nationalist UPN was dislodged from the council after 28 years of uninterrupted rule. Here, the radical basque left wing nationalist EH Bildu won, with the backing of a number of left wing and Basque nationalist forces (including some backed by Podemos, United Left and others). The new mayor, Joseba Asirón, was also greeted by a crowd in the main square, shouting “Agur UPN” (Goodbye UPN) and waving Basque and Republican flags. See video:

In Leganes, population 190,000, in the industrial belt south of Madrid, the Leganemos list got six councillors and came second, less than 700 votes below the PSOE. Because of the fragmentation of the vote (with 4 parties getting 6 councillors each), it was not possible to reach a left unity agreement. Leganemos, a list supported by Podemos and a significant section of the local United Left, remained in opposition. Like in so many other towns and cities across the country, its councillors swore their positions by making mention of workers struggles, movements against cuts and austerity and claiming the memory of those shot by Franco’s troops during the civil war. Officially, councillors have to make an oath to the Constitution and the King. Councillors backed by Podemos across the country said they made the oath “by legal imperative”, but promised to defend the interests of working people, not the King.

Everywhere, these new councillors have agreed to take substantial cuts to their official salaries (implementing in practice the principle that an elected representative should draw a wage which is in tune with that of those who elected him or her), and renounced their official cars, etc. They have also committed to rule by being accountable to, and involving the direct participation, of ordinary working people. 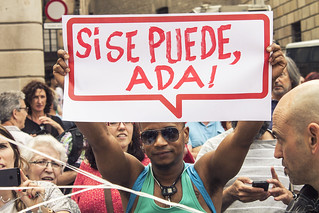 These are highly symbolic gestures which reflect the massive shift in Spanish politics since explosion of the 2011 indignados movement. The “Mareas” mayors in Galicia refused to attend a traditional ceremony the day after their swearing in, in which elected mayors are supposed to pledge their allegiance to Santiago, Galicia’s Saint Patron. On her first day in office, Barcelona mayor Ada Colau took the underground to go to defend a family threatened with eviction in the working class district of Nou Barris (where her list BeC got over 33% of the vote). The eviction was prevented.

Overall, the results of the municipal elections were a serious setback for the ruling right wing Popular Party which lost a total of 2.5 million votes (20 percentage points). But the “opposition” social-democratic PSOE lost over 600,000 votes (2.7 percentage points). The votes of United Left and of those lists which were supported by Podemos are much more difficult to add up, as there were a variety of local “Popular Unity” lists with different component parts in different cities. Three of the largest cities (Madrid, Barcelona and Zaragoza) are now ruled by mayors from such lists. 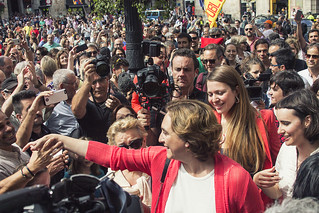 Another interesting aspect of the process of electing the new mayors has been the discrediting of Ciudadanos (Citizens). This new right wing formation was supposed to stand for “democratic renewal”, but in reality this group has been crucial in allowing the PP to continue to rule a whole series of provincial capitals as well as the Madrid region, and has made a deal with PSOE allowing it to form a government in Andalucia despite being mired in corruption scandals. As a result, it has been widely discredited.

As well as enormous enthusiasm and hope that now things are going to change, the results of the municipal elections and the new mayors have brought out a number of important strategic discussions. First of all, for tens of thousands of activists, it is clear that unity of the different parties to the left of the PSOE has been crucial to guarantee these victories. This has opened a lively debate about the need for some sort of a united list including Podemos, IU and different left nationalist organisations to contest the forthcoming general election. There are obstacles to this, including the interests of the apparatus of the different organisation, petty rivalries, etc.

The debate has also centred too much on the purely technical aspects of such unity (what should be the name of the list, the mechanism for electing the candidates, the role of each party, etc), rather than on the programmatic aspects.This is a bit like starting the house from the roof. Unity should be based on a commonly agreed program of concrete measures to be taken to reverse cuts and austerity measures as well as guaranteeing basic rights like education, healthcare, housing, etc.

Another question which has been so far missing from the debate is the necessary link between the struggle in the institutions, and the mass mobilisation of workers and youth in the streets. We must understand that the work in the institutions, particularly at the level of local councils, is extremely limited in its scope. To this we have to add the fact that the new mayors in most cases depend on very fragile alliances with other forces, including the PSOE. The only way to strengthen their position is by fully using, and relying upon, mass mobilisations in the streets. The councillors and mayors must be accountable to mass assemblies in each district so that the pressure of mass action can be brought to bear on the institutions.

Regardless of all the difficulties ahead, the election of these new mayors and councillors, which is the first direct political expression of the profound process of mass mobilisation of working people for the last 5 years, is a breath of fresh air. It gives the whole movement confidence in its own strength as well as hope that the regime and its austerity policies can be defeated.

Marxists must participate energetically in this movement, being active in its every day battles, while always pointing out that the only way in which lasting victory can be achieved is by challenging the rotten capitalist system as a whole.