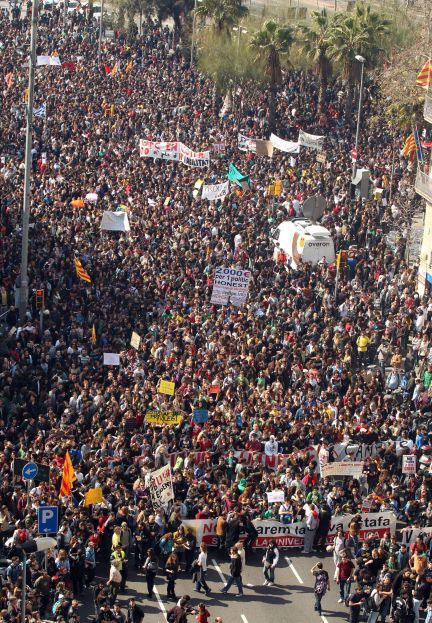 Hundreds of thousands marched in Spain on February 29 in student and trade union demonstrations against austerity cuts and in protest at brutal police repression against students in Valencia. The trade union leaders, under pressure from a very angry mood form below, are now openly talking about calling a general strike, possibly on March 29.

The largest student demonstrations during the day took place in Barcelona and Valencia, but thousands also marched in cities and towns across Spain. Called by a wide range of student organisations and trade unions tens of thousands (70,000 according to the organisers) marched through the centre of Barcelona in a joint movement of University and high school students, and teaching and administrative University staff.

From early in the morning students, teachers and workers gathered outside the main universities and then marched in different columns to the Plaça Universitat in the centre of Barcelona. Students of the Autonomous University of Barcelona (UAB) cut off motorway and train accesses to their campus in Bellaterra. A separate march in defence of the national health service also joined the main contingent.

A huge demonstration then made its way up the Passeig de Gracia and back to Plaça Universitat. A large number of students went in to the historic University building while others marched to Pça España where the World Mobile Congress was taking place. By this time there had already been some clashes with the police which had charged against the thousands of students still demonstrating making several arrests. In scenes reminiscent of the police brutality against students in Valencia in previous weeks, police vans charged against students on foot. (video). Thousands also marched in Lleida, Tarragona and Girona.

The autonomous government of Catalonia has been at the forefront of implementing massive austerity cuts, hitting particularly hard health care and education. For months now there has been a movement from below of workers and users of these services to resist the cuts, including occupations of health centres to prevent their closure, wild cat strikes and massive official trade union demonstrations. The University strike was in response to above inflation increases in tuition fees, hundreds of layoffs of teaching and administrative staff, widespread cuts in funding and cuts in wages and conditions of workers.

Valencia also saw a massive demonstration of 60,000 people, students and trade unionists. This came after the largest demonstration so far in the struggle against the austerity cuts of the regional right-wing government on Saturday, February 25, when 200,000 people marched in Valencia capital and a further 60,000 in Alacant and 30,000 in Castelló.

The same week had seen two demonstrations of 10 to 20,000 students against the brutal repression used by the police against high school students. The scenes of riot police beating up very young school students had galvanised people throughout Spain, with solidarity and protest demonstrations taking place in dozens of cities and towns. As we saw yesterday in Barcelona, the repression in Valencia was not an isolated incident, but a sign of things to come, as the right wing PP government in Madrid warns that it will implement austerity cuts “regardless of what the streets say”.

As well as police repression, there has been a concerted campaign of media lies and manipulation on the part of the right-wing newspapers and government spokespersons. The front pages of La Razón, ABC, El Mundo and others had huge pictures of cars in flames, blaming “violent extremists” allegedly manipulated by the Socialist Party for the “orgy of violence” in Barcelona. There is a clear attempt to present any protest as a criminal act. The workers at the Valencian regional government TV and Radio stations already staged a protest and issued a strongly worded statement demanding the resignation of the heads of the newsrooms for what they denounced as deliberate manipulation of the news coverage of student protests (see video with English language subtitles).

Nearly 300,000 people marching through the streets of the three provincial capitals of Valencia on February 25 was an extraordinary show of strength of the organised trade union movement and a demonstration of the widespread public opinion opposition to the cuts. However, there is only so much that can be achieved with street demonstrations and unless action is escalated through strikes there is the danger of tiring out the movement.

In the rest of Spain there were student demonstrations in about 20 different cities, the largest in Madrid (10 to 15,000), Zaragoza and Mallorca.

As part of the European day of action called by ETUC, the main trade unions CCOO and UGT had also called for demonstrations against the labour counter-reform, in most cases in the evening. These being on a working day, the demonstrations were not on the same scale as the massive day of action on February 19, when 2 million marched in over 50 cities, but still, hundreds of thousands participated. The largest demonstrations were in Madrid and Barcelona, with 50,000 each, but there were also large marches in Malaga, Zaragoza, Granada, Murcia, etc (see picture gallery on Facebook). In Castilla-La Mancha it coincided with a 24-hour strike of civil servants in the regional authority.

The mood was again very militant, and the main slogan was the call for a general strike. The massive character of the February 19 marches put the trade union leaders under enormous pressure to set a date for a 24-hour general strike. The pressure has filtered through the structures of the trade unions, starting at regional level. Some of the regional leaders mentioned the inevitability of calling a general strike in their speeches to the demonstrations yesterday. On the other hand, the right-wing government of Rajoy is not prepared to make any concessions. On the contrary, it is preparing for another round of massive cuts in the 2012 state budget as it is adamant to cut the budget deficit to 4.4% of GDP (from a record 8.5% in 2011) despite the recession in the economy. This would mean a brutal 44 billion euro in spending cuts and tax increases, a declaration of war against working people.

The trade union leaders have called for yet more demonstrations on March 8 and then March 11, and are openly talking of a 24-hour general strike on March 29. Even at this late stage they sent a letter to the government demanding negotiations on the labour law counter-reform and are conditioning the calling of a strike to whether the government answers their letter or not!

Whatever the subjective intentions of the trade union leaders, the objective conditions in Spain (an acute crisis of capitalism, a right-wing government with an overall majority which feels confident and a growing mood of anger amongst wide layers of the population) all lead towards a sharpening of the class struggle.

Spain is inexorably moving in the same direction as Greece, a vicious downward spiral in which massive debt and budget deficits force massive austerity cuts, which in turn deepen the recession, which leads to higher debt and even more cuts.

In these conditions demanding that the government returns to the negotiating table is at best naïve and completely inadequate. What is required is to recognise that we are faced with a crisis of capitalism like we have not seen since the 1930s and that the only way for the labour movement to defend jobs, conditions and wages is to mount a sustained campaign of struggle. Mass demonstrations are a welcome first step and calling a 24-hour general strike represents a positive change in tactics. But Greece shows that in these conditions a 24-hour strike is not enough.

An escalating campaign of mobilisations, starting with a 24-hour general strike, but then moving to a 48-hour and 72-hour general strike, needs to be combined with offering a clear alternative to the crisis of capitalism. The leaders of the workers’ organisations, starting with those of the United Left, need to explain clearly that this is a crisis of the capitalist system, which can only be overcome through the nationalisation of the means of production under democratic workers’ control, so that the economy can be planned in the interests of the majority.