The results of the Spanish elections on Sunday November 20 represented a massive defeat for the Socialist Party (PSOE) which had introduced austerity measures to make the workers pay for the capitalist crisis, rather than a victory for the right wing Popular Party (PP) which will now have to introduce even more savage austerity cuts in the face of the acute crisis of Spanish capitalism. 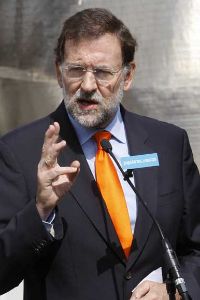 Mariano Rajoy, leader of the PPThe Popular Party received 10.8 million votes (an increase of only 550,000 in relation to the previous general elections in 2008, barely 5% more) which give it 186 seats. This is an overall majority and will allow it to rule without the need to reach any deals with other parties.

The PSOE, which was in power since 2004, was severely hammered, receiving only 6.9 million votes, a loss of over 4.3 million votes (that is a loss of 38% of the total number of votes it got in 2008). This is the worst result since 1977 for the Socialist Party in number of votes and the worst ever result since the restoration of democracy percentage wise and it gives the PSOE only 110 members of parliament.

The reasons are clear: Spain has suffered a particularly acute manifestation of the crisis of capitalism. The social impact of the recession which started in 2008 has been brutal for working class families. Unemployment has jumped from under 8.3% in 2007 to 21.5% now (from 1.8 million to 3.8 million), the highest in the OECD. Youth unemployment is close to 50%. The number of families who have seen their homes repossessed since the beginning of the crisis stands at over 300,000 (while there are 3.4 million empty properties which cannot be sold in the market). The level of poverty has jumped to over 20% and many families, having exhausted any unemployment benefits now depend on charity from NGOs, Church organisations and others.

The PSOE government, led by Zapatero, was elected in 2004 with the votes of millions of workers and youth who had mobilised against the hated right wing government of Aznar, particularly against Spanish participation in the Iraq war. They hoped that Zapatero would carry out progressive policies. But as soon as the economic crisis struck, the social democratic Zapatero became the best implementer of the policy needed by capitalists and bankers: make the workers pay for the crisis. The turn became symbolised by a phone call from Obama in May 2010, in which he told Zapatero in no uncertain terms that “bold reforms” (read counter-reforms) were urgently needed. Amongst other austerity measures, Zapatero lengthened the retirement age to 67 and cut the wages of civil servants. None of these measures solved Spain’s economic problems, but only made them worse.

By the end of Zapatero’s government there was almost a national unity pact with the right wing PP, which meant enshrining the “principle” of “balanced budgets” into the constitution with almost no parliamentary consultation in August 2011. This was done in the name of “reassuring the markets”.  In the week leading up to the elections, the yield on Spanish bonds shoot up into bail out territory reaching a record 7% for 10 year bonds.

In this context, Zapatero stepped down as president and called early elections. The attempts by PSOE candidate Rubalcaba to present himself as a “social democrat”, a defender of public services and the welfare state fell on deaf ears. Why have you not done in power what you now promise, thought millions of PSOE voters. Many of them simply stayed home (turnout was down 2 percentage points or 1.5 million voters less), some shifted to the left and voted United Left and others went to other formations like the UPyD, which presents itself as “progressive”.

The main lesson in the defeat of the PSOE, which follows the defeat of the Portuguese Socialist Party and the collapse in the popularity of Papandreou’s PASOK in Greece is two-fold. Firstly, in the middle of the crisis of capitalism there is no room for social democratic reforms. The only policy possible is one of massive attacks on the working class. Secondly, this inevitable leads to electoral collapse as these are parties which receive their votes from the working class.

The results of United Left (IU) represent a significant increase in votes, from 780,000 to 1,680,000 which give them 11 members of parliament (as opposed to 2 in 2008). To many, IU was still too small to represent a real challenge to the main parties. Yet, it is clear that it received the vote of a whole layer of workers and youth who have been drawing political conclusions from the experience of the last 2 or 3 years. It was not only the experience of the economic crisis but also the experience of the mass mobilisations of the indignados (indignant) on May 15, June 19 and October 15, bringing out hundreds of thousands, millions of people to protest against the capitalist crisis.

It is also interesting to note that the attempt to set a more moderate left-green party in between IU and the PSOE, a project backed by some who have split to right from IU and some who are still linked to IU (like the ICV in Catalonia) has completely flopped, despite having access to money and media exposure. It polled barely 0.8% nationally, and only got one member of parliament for Valencia where there are local particularities.

The increase in votes for United Left is clearly the result of it being seen as more to the left and more in tune with the movement of the youth in the streets. Some prominent activists in the May 15 indignado movement figured as candidates, for example. This is the correct direction IU should be moving in. Its current program, while being a progressive program of reforms, does not really stand up to the test of the seriousness of the crisis of capitalism that we are facing, in Spain and worldwide.

The problems that millions of workers are facing are not the result of “neoliberal” governments and policies, nor the “pressure of the markets”. If that were true, it would be enough to change governments and regulate the markets and the financial sector. However, these are just expressions of the deep crisis of the capitalist system as a whole. One cannot tinker with the system, nor convince the capitalists to invest in production and create jobs, while defending and improving wages and conditions.

What should be put into question is the capitalist system as such. Communist Party general secretary and IU candidate Centella has talked of the need for “democratic planning of the economy”. This is correct. But in order to plan the economy, the means of production must be taken away from the capitalists and bankers, to be used in the interest of the majority.

What is needed is a program that openly challenges capitalism and poses a socialist alternative: the common ownership of the means of production so that the economy can be democratically planned in the benefit of working people. The conditions to explain such ideas have not been so favourable for a long time. Millions of workers and youth, through their own experience have started to challenge and question the capitalist system which is in crisis. Marxists must participate in the debates that have already opened up within United Left and in the wider movement to patiently and comradely explain these basic ideas.

The results in the Basque Country would need a separate analysis. Amaiur (the coalition around the abertzale nationalist radical left and EA) got 333,000 votes and 7 members of parliament, making it the first party in the Basque Community and Navarra in number of MPs and only narrowly the second in number of votes. Suffice to say that the results, which match the best historical results of Herri Batasuna and EA put together, is based on a left wing “anti neoliberal” program and the hopes in a political solution to the Basque struggle after the announcement of ETA’s abandonment of armed struggle.

The newly elected PP right wing government of Rajoy will now face an impossible task that he is already dreading. The European Union has demanded 30 billion euros worth of additional cuts (more than double what the PSOE government already implemented). The “markets” (the bankers and speculators, the capitalists and financiers) are already demanding their pound of flesh to be cut from the living body of the Spanish working class, with the editorials of all the worlds capitalist newspapers demanding that Rajoy reveals his economic policies. The Wall Street Journal editorial thundered: “Mariano Rajoy has won a big majority, but now he has to use it.” The Financial Times editorial introduced a sense of urgency, pressing Rajoy to move “quickly to implement painful spending cuts and other austerity measures.”

After having demagogically attempted to stand to the left of the PSOE during the campaign and refused consistently to explain his real program, now Rajoy looks very worried and is attempting to prepare public opinion for what is coming. “It is no secret to anyone that we are going to rule in the most delicate circumstances Spain has faced in 30 years,” he said and added: “there are no miraculous cures to solve Spain’s economic troubles.”

He seemed to be pleading with the capitalists in his first speech, arguing that election winners “must be given a little room for manoeuvre that should last more than half an hour.” The markets answered with further attacks on Spanish bond yields and falls in the stock exchange. Angela Merkel called him on Monday morning to dictate the terms. “This is a difficult time for Spain and Europe and you have received a clear mandate from your people to adopt and implement without delay the necessary reforms”, she said. We want massive cuts and we want them now was her message.

The straight talking president of the bosses’ confederation CEOE Arturo Fernandez has said that the economic situation is “unsustainable” and the country is staring “into the abyss”. He has demanded “brutal changes” in labour law (ie the abolition of collective bargaining and the right for bosses to hire and fire at will), and warned that the “measly reforms which have been introduced so far” are not enough and that “deep thorough changes” are needed.

What Rajoy will have to do is clear: increase indirect taxation, cut public spending in health and education, introduce part payment of health services, increase tuition fees, destroy collective bargaining and attack employment rights, further cut public sector workers wages, further attacks on pensions, etc. Such policies will only provoke a deepening of the recession and even more attacks on the working class.

If Merkel, Rajoy and the Spanish ruling class think that the election results mean a firm and solid mandate for austerity cuts, they are in for a big surprise. Such a policy will provoke, sooner than later, a massive explosion of the class struggle. Greek-style attacks will inevitably lead to Greek-style class struggle.

The leaders of the PSOE can be counted upon to act in a responsible and statesman like way, for the good of the country (that is for the good of the capitalists and bankers, in Spain and abroad). National unity (read national austerity) will be the motto of the day like in Greece and Italy.

The leaders of the trade unions will also be put under enormous pressure to join this chorus of national unity. However, like in Greece and Portugal before, pressure from below will force the unions to act and its leaders to adopt a more militant stance or be replaced by others who will.

The stage is set for massive class battles. It will be through these that workers and youth will draw more advanced political conclusions.