Those sights are now burnt into the consciousness of the Catalan people. As a result, on October 3rd, a national shutdown paralysed Catalonia with huge demonstrations against police repression.

Firstly: the importance of Spanish unity and the denial of the right of self-determination for the maintenance of the 1978 constitution regime. This regime represents the limited bourgeois democracy established at the end of the Franco dictatorship as a result of an agreement between the old order and the leaders of the left parties in order to stave off revolution.

Secondly: the Catalan people’s strength of will to exercise their democratic right to decide their own future, regardless of whether that is allowed by the Spanish constitution.

The movement for Catalan independence has come out enormously strengthened from the last few weeks of struggle. There is a mood of people’s power, the idea that the mass mobilisation of the many is stronger than any police repression. There is a sense of indignation, of rage, at the brutal repression enacted the Spanish police and civil guards against people exercising their right to vote. These forces are now considered as being “occupation forces” and that is really the way they acted on October 1.

The organisation of the defence of the referendum, which the Spanish state had declared “unconstitutional”, relied to a large extent upon initiatives from below by neighbourhood and city wide Referendum Defence Committees. In many cases, these then turned into October 3 Strike Committees.

The October 3 strike had been called a week earlier by the CGT and a few other small unions (COS, IAC, I-CSC) in order to fulfill the legal requirements of a 10-day-warning for a general strike. The bigger unions, CCOO and UGT, had refused to join in the call. Then, on the day of the referendum, under extreme pressure from below to give a clear answer to the brutal state repression, they said they would join in the protest, but in order to avoid using the words “general strike”, they called it a “countrywide stoppage” (aturada de país). The CUP for its part decided to join the general strike. The Round Table for Democracy, set up by CCOO, UGT and a number of civil organisations together with the small and medium enterprises bosses organisation, however, insisted that what they were calling for was not a strike, but a stoppage that had to be decided by workers together with their employers. In the public sector, the Catalan government Generalitat, announced it was joining in the stoppage and therefore would not deduct wages from workers taking part. CCOO and UGT went as far as giving out leaflets in factories (like the giant car producer SEAT) explicitly saying they were not calling for a general strike!Regardless of this deliberate attempt to create confusion and downgrade the character of the protest, tens of thousands of health workers and teachers met in mass meetings and voted to take part in the strike.

At the forefront of the participation by the working class in the movement are the Barcelona dockers and firefighters. The former voted not to handle a cruise liner, which was being used to host thousands of police officers sent to Catalonia to prevent the referendum. The latter played a key role in defending polling stations and have been central to all the demonstrations.

The dockers also voted unanimously to join in the general strike. Here are the scenes when their columns joined together on October 3:

In any case, the stoppage was massively followed in the public sector, particularly in the health care system, in education but also transport. Thousands joined mobile pickets, shutting down main motorways across Catalonia, accesses to industrial areas and wholesale markets. Small shops were generally closed. Newspaper workers at El Periódico went on strike. The weakest point was private industry, particularly because of the open sabotage of the strike on the part of the leaders of CCOO and UGT.

Throughout the day the masses were on the streets in cities and towns. Early in the morning there were huge pickets (like the one in Cornellà displayed below), at lunchtime mass demonstrations in the main squares and outside town halls, which were surpassed by even larger rallies at 6pm.

In Barcelona a massive demonstration led by the students went from Pça Universitat to the Catalan Parliament and were joined by the firefighters.

Local police put the figure at 300,000. A highlight of the march was when protesters passed the Barcelona National Police HQ in Via Laietana.

The huge crowd stopped to shout defiant slogans: “We have voted”, “Don’t touch our grannies”, “Occupation forces out” and even “this building will be a library”, showing the mood of defiance and confidence. The masses on the streets feel they are in charge and that from now on they will be the ones making decisions.

In the evening, two marches had been called, that of the unions calling for the strike and the CUP at Jardinets de Gràcia, and another one by the Round Table for Democracy at Pça Universitat. In reality, the two merged together as people packed the streets of the centre of Barcelona from end to end. Local police estimated the figure at 700,000, but it is likely there were at least a million people on the streets. Again they marched to the Via Laietana Police HQ to shout slogans against repression.

Significantly there was a smattering of Spanish flags in the demonstrations, showing that a layer of people who are not for independence and perhaps some who didn’t participate in the referendum on Oct 1, came out to show their rejection of the brutal police repression.

Outside Barcelona there were marches in all towns and cities, big and small. In most cases these were the largest ever. Over 50,000 marched through the streets of Girona (pop 100,000), 45,000 in Lleida (pop 140,000), Sabadell saw two massive rallies, one at lunch time and one in the evening, each marking a record for attendance. In Manresa (pop 75,000) 28,000 marched and contrary to the advice given by the Catalan police Mossos, they also went to the HQ of the Civil Guard to protest their brutality. There were also huge demonstrations and rallies in Reus, Tarragona, Tortosa, Hospitalet, Badalona, Vic, etc.

The day was closed by a surprise televised broadcast by the King. Usually the King is seen as a figure standing above politics, but at this time of serious crisis of the 1978 regime, his address was an attempt to bring unity amongst the political parties that are linked to the regime and to lay the ground for a further assault on Catalonia. The King used very strong language to attack the actions of the Catalan government and Parliament in convening the referendum and demanded that Spanish legality be restored.

The message was a clear instruction to the PSOE to join in with the ruling PP party in moving to prevent any further moves by the Catalan Parliament, including by suspending self rule through the implementation of article 155 of the Constitution. His speech was received by a deafening session of banging of pots and pans across Catalonia.

The idea of Catalan independence is closely linked to the idea of a Republic, reflecting a deep seated rejection of the whole 1978 regime. Now the King has linked his fate to that of the repression of the Catalan people. His speech to “the nation” was entirely in line with the tone of the Rajoy government. Podemos and United Left should take advantage of the crisis in order to mobilise against the Monarchy and the weak and corrupt PP government. Important sections of the Spanish and Catalan ruling class are very worried and they would like to find a negotiated solution which stops the movement of the people from below. There is a deafening cry for talks, mediation and negotiation coming from all layers of bourgeois public opinion: lawyers, archbishops, business organisations, etc. The ruling PDCAT in Catalonia is divided over how to proceed next and has called for international mediation. The problem for them is that they are trapped. On the one hand they have unleashed a mass movement in Catalonia that has acquired its own dynamics and could go outside of their control if they were seen as betraying it. On the other hand the Spanish state is offering them nothing, not even talks.

On the contrary, the PP and the whole of the Spanish regime is escalating the situation by issuing constant threats. The PP spokesperson in Parliament, Hernando, described the October 3rd stoppage as “having a Nazi character”. PP Minister of Defence Cospedal reminded Catalonia that the constitution says “the Armed Forces are there to guarantee the unity of Spain”, while sending several Army convoys to Catalonia to supply the police forces already there, which have come under growing opposition from the masses. Former PSOE leader Alfonso Guerra also suggested the Army should be sent in, while former PP premier Aznar demanded tough action by the Rajoy government, “or else they should resign and call elections”.

At the same time the PP and its allies, particularly Ciudadanos, are promoting a Spanish reactionary nationalist movement under the slogans of the “defence of the fatherland”, “defence of the unity of Spain”, “defence of the security forces”, etc. So far this has only attracted a far-right fringe, but it is not ruled out that it could grow over the weekend, also in Catalonia where a demonstration has been called on Sunday.

As I am writing these lines, news arrives that the Constitutional Tribunal has suspended Monday’s session of the Catalan Parliament which was supposed to discuss the referendum results and take a decision on declaring independence in one way or another. This is a major assault on Catalan democracy, as in effect it closes down its democratically elected parliament. This move can only further enrage the masses and push Catalan Puigdemont president to go further than he might have intended.

The Catalan masses need to maintain and expand their committees and link them up at a local and national level, to give the movement a democratic and accountable leadership. Catalan Parliament should meet on Monday in defiance of the undemocratic instructions of the Constitutional Tribunal, and the session should be protected by the masses in the streets.

A national assembly of Defence Committees should be convened in order to decide on the next steps for the movement. These should include the preparation of a proper general strike, decided and voted in mass assemblies in workplaces and neighbourhoods, which should be used as a launchpad to declare the Republic. 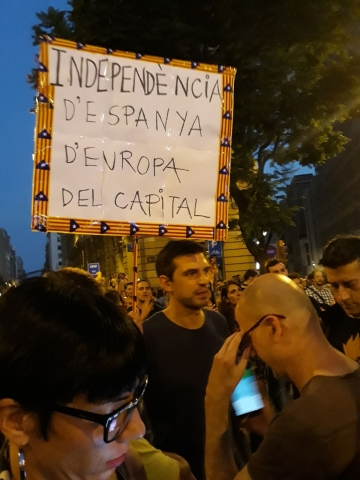 Events in the last days and hours confirm what we had warned in advance: in the context of the Spanish regime of 1978, the task of national self-determination becomes a revolutionary one and therefore cannot be completed under the Catalan bourgeois politicians, but only by revolutionary means and by winning over the Catalan working class as a whole.

Marxists stand for a Catalan Socialist Republic which should serve as a spark for revolutionary developments across all Spain.