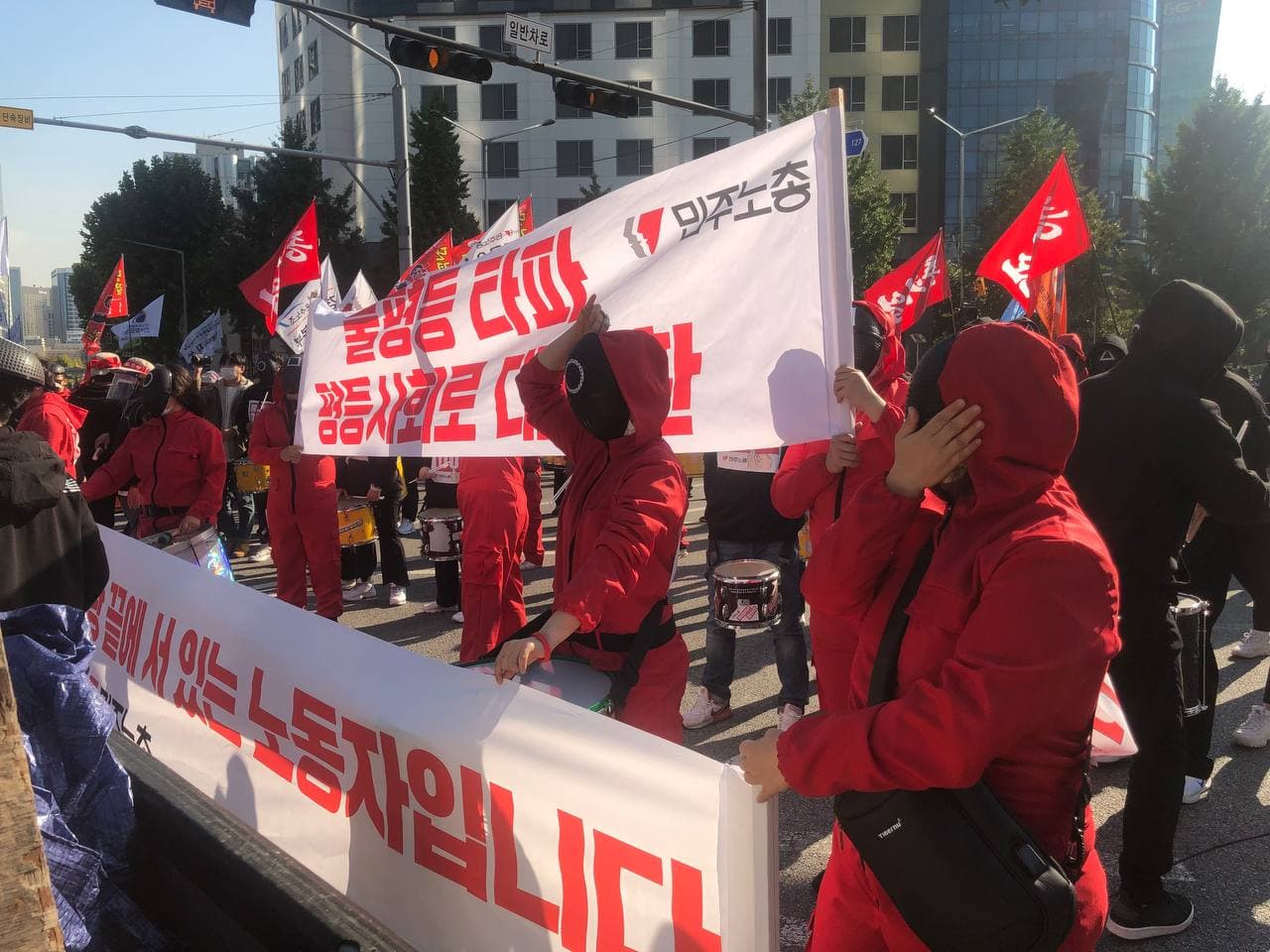 On 20 October, over 80,000 members of the Korean Confederation of Trade Unions (KCTU) answered the leadership’s call to take to the streets across 14 regions of South Korea. A further 50,000 workers also walked off their jobs at 2pm.

The workers who participated in the strike were drawn from all industries under the KCTU umbrella.

Metal workers, construction workers, non-regular school workers, along with service and medical workers and others stood shoulder to shoulder in their workplaces and on the streets.

Radicalisation of the labour movement

The KCTU called this nationwide strike in order to demonstrate the deep anger that exists among Korean workers towards the whole capitalist establishment and all the political parties. While the South Korean government’s handling of the pandemic has been lauded internationally, the workers continue to toil under abhorrent conditions.

The accumulated frustration among organised workers has led to the radicalisation of the KCTU from below. In December 2020, the KCTU members voted out the previous president, who had attempted to collaborate with the government and the capitalists, and replaced them with Yang Kyung-soo, who promised to struggle for workers’ interests by building for a general strike. Notably, Yang is the first KCTU president who is also a temporary worker, one of over 41 percent of Korean workforce toiling in casualised jobs. Many see Yang as coming from a younger, more radical generation of workers.

Since taking leadership, Yang has taken a more militant approach towards the state through organising workers’ protests and rallies in defiance of the state’s arbitrary, ever-changing, and highly undemocratic restrictions on public assembly in the name of controlling the pandemic. The state then responded to this with direct repression. On 2 September this year, the state raided the KCTU’s headquarters and arrested Yang on charges of violating the Assembly and Demonstration Act and the Infectious Disease Control and Prevention Act, as well as traffic disruption.

The remaining union leadership subsequently called for a general strike today in response. In a nutshell, the general strike reflects the increasingly direct confrontation between the capitalist class and the working class.

The KCTU mobilised for the strike through its 14 headquarters across the country. Members were asked to walk out of their jobs starting at 2pm. Those who work near Seoul, such as Incheon or around the Gyeonggi province, were asked to gather in the capital for a large show of force. In the end, it is estimated that 80,000 workers from around the country participated in rallies.

In smaller cities, the participants were in the thousands. In Gwangju, home of the Gwangju uprising of 1980, 3,000 people gathered in front of the City Hall. In Choenan, a transportation hub, 2,000 workers protested. In Daegu, the third biggest city in the country, 5,000 joined the rally, while in Busan, the second largest city, an estimated 10,000 people participated in the strike. 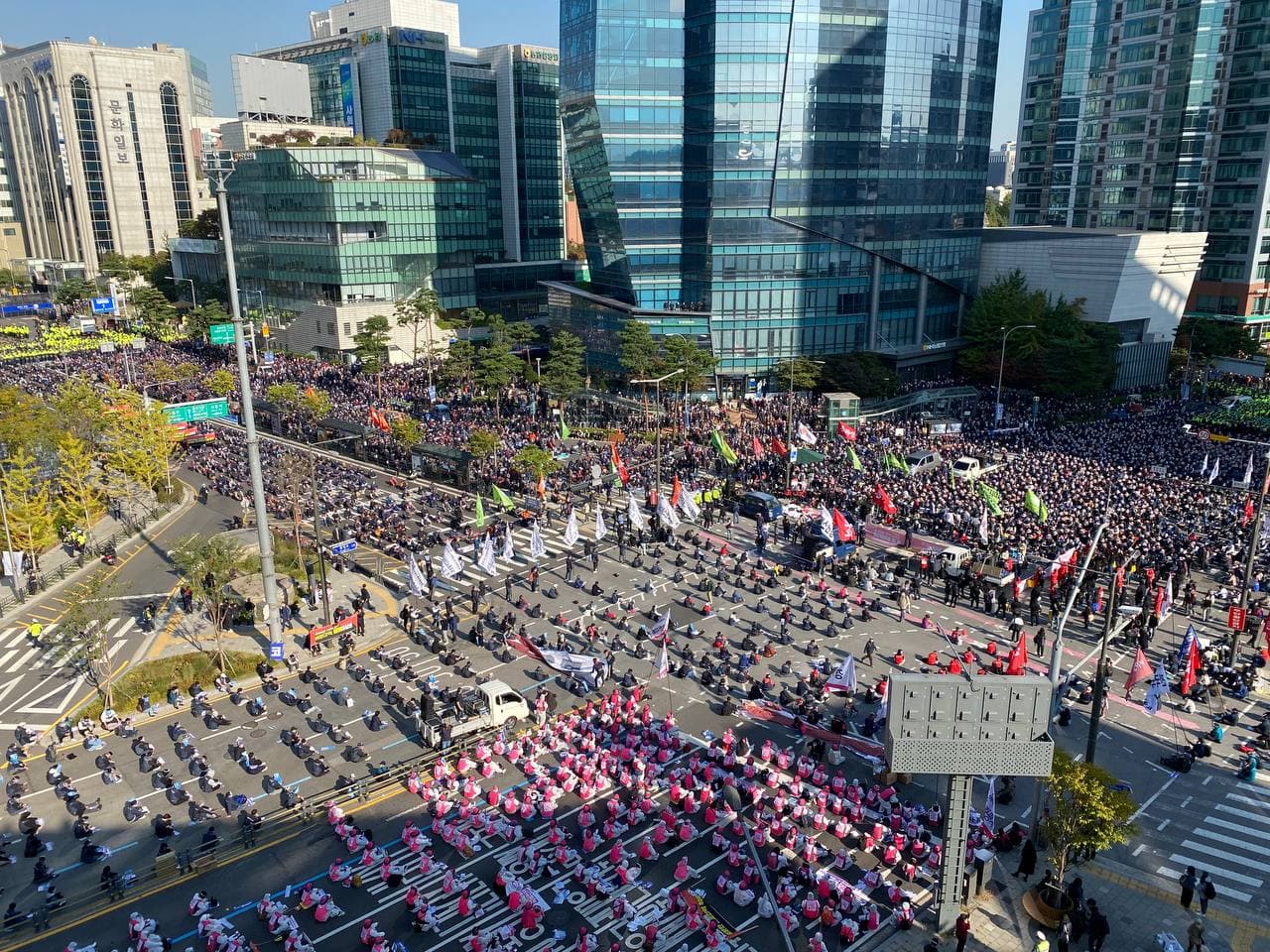 Around 80,000 workers from around the country participated in rallies / Image: pptec, Twitter

The center of gravity of the general strike, however, was clearly in Seoul. Over 27,000 workers descended upon the busy downtown intersection in front of the Seodaemun Subway Station. In order to avoid giving the police a head start in setting up their defences, the union only announced the actual gathering point a few hours ahead of the rallying time. That tens and thousands of workers were still able to mobilise at such short notice attests to the enthusiasm and self-discipline of the participating workers.

While the general strike has sent a palpable shockwave around Korean society, it must be said that the KCTU actually has the potential to mobilise on a far greater scale. With over one million members, the KCTU is the largest trade union in South Korea. Although a national strike that involves 80,000 people is far larger than any other labour struggle in recent years in East Asia, it still represents only a small fraction of the real potential that the KCTU can muster.

Crack down and pathetic words

In the face of these strike rallies gathering thousands, the South Korean police scrambled to enforce Covid-19 rules and strike out at the workers’ democratic rights.

In Seoul, an estimated 16,000 members of the police were deployed to stop the KCTU rally. As they did not know where the rally would take place, the police could only act on guesswork. About 500 police buses were deployed to install cross-shaped car walls in the north-south section from Plaza Hotel in front of Seoul Plaza to Gwanghwamun Square, and in the east-west section from Seorin-dong to Salvation Army Center. The police also built a car wall around Gwanghwamun and deployed 170 units there, while it is rather far away from the actual location of the rally.

In Busan, the police deployed five battalions at the main site. A police official said: “In Busan, rallies of more than 50 people are prohibited in the third stage of social distancing,” adding, “We will sternly respond to illegal activities by applying infectious disease prevention methods.”

The government, now under the “progressive” administration of President Moon Jae-in and the Democratic Party of Korea (DPK) has attempted to paint this general strike as an irrational act, rather than as the workers’ justified action in defence of their own interests. Absurdly, the Minister of the Interior and Safety, Jeon Hae-cheol, even tried to portray the union as an obstacle to ending the pandemic:

“KCTU’s nationwide walkout plan could threaten the virus situation that has been improving recently after hardship while destroying the expectations of a return to normalcy at this very important turning point.”

One must ask: who is responsible for creating the conditions that have compelled workers to protest en masse during the pandemic? What kind of “normality” do the Korean workers have to look forward to returning to? Why would anyone want to return to the long working hours, low pay, and terrible privatised housing and healthcare that have characterised South Korea for years?

The national mobilisation was called by the union as a show of force and anger of the Korean working class against the brutal realities created by South Korean capitalism. The main slogans are, “smash inequality!” (불평등 타파) and “inequality out!” (불평등 OUT). The KCTU leadership also advanced 15 demands that generally aim to achieve the following three goals:

Marxists fully support these reforms, which are desperately needed by Korean workers. On the other hand, the entire ruling class has shown that they have no interest in carrying out these measures. Whether it is the ruling liberal DPK, the conservative People Power Party (PPP), or any of the minor parties in opposition, they are all firmly rooted in the interest of the bourgeois class in South Korea that seeks to maintain the system as it is. None of them can be relied upon, or even pressured into carrying out policies in favor of the workers unless they face a political challenge to their power.

Therefore, while the KCTU took the first correct step with this general strike as a show of force and class anger, they need to actively build a political party through their roots in the trade union movement. This party should not just attempt to reform the existing capitalist system in South Korea, but should aim to overthrow it and replace it with a workers’ government in order to carry through a socialist program. This is the only way the South Korean workers and youth can escape the society that daily renders their lives into an endless ‘Squid Game’.