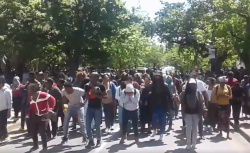 If you want to buy a copy of the paper, please email us on revolutionpta@gmail.com

The crisis of South African capitalism can only be overcome with a socialist revolution. The only way out of this nightmare is to break with the system which created it. The only future possible for the South African youth, workers, and oppressed masses is a socialist future.

The Myth of liberation

The crisis of capitalism is especially acute in South Africa. It is the vast majority of poor and working-class people who suffer the worst effects of this crisis: mass unemployment, a lack of decent housing, inadequate education, landlessness, and rapidly falling living standards. The root cause of this situation lies in the capitalist system, which is unable to grant even the smallest concessions to the workers and poor.

Formal democracy was achieved in 1994 with the overthrow of the hated apartheid regime. But the wealth of the capitalists was left untouched. South Africa remains a firmly capitalist country, tightly run and controlled by a small minority of capitalists, bankers, landlords, and giant multinational companies. They have been joined by a ravenous elite of upstart capitalists close to the ANC and the state.

The capitalist policies pursued by the ANC government since 1994, together with the worldwide crisis of capitalism, have resulted in economic stagnation. In fact, the economy had not recovered from the 2008 crash when it was hit by the disastrous effects of the coronavirus pandemic. Now the global slump is further devastating the economy.

South Africa’s Gross Domestic Product (GDP) grew by a paltry 0.2 percent in 2019, against 0.8 percent in 2018. The IMF expects it to fall to 5.8 percent in 2020 due to the outbreak of the pandemic. The National Treasury expects a contraction of 7.2 percent. The OECD expects 8 percent. The Reserve Bank meanwhile believes that GDP dropped by 32.6 percent on an annualised basis in the last quarter. The truth is that nobody really knows the true situation. The full economic damage caused by COVID-19 will only be clear after several months, and perhaps not until years from now.

The crisis in the economy is having a catastrophic impact on living standards. Working class people are now worse off than they were 10 years ago. Real unemployment stands at 10.2 million people. To this must be added the millions of jobs lost during the lockdown. Precarious workers have been devastated with 3 million having lost their jobs overnight. Youth unemployment is the highest in the world. Unemployment levels for young people aged between 15 to 24 stands at 59 percent. More than 8 million of the country’s 20.5 million young people neither have a job, nor are they in education or training. A whole generation has now grown up with this being their reality.

The social impact of the crisis cuts to the bone. It is enough to mention the sickening crisis of violence against women to understand how deep it goes. In South Africa today, the number of women killed by their partners or spouses is five times higher than the world average. If the health of any society can be measured by how it treats women, children and old people, then South African society is in an extraordinarily bad condition. Again, the root cause of this social crisis is the capitalist system which has torn apart the social fabric, uprooted millions of people and disrupted social life.

South Africa is one of the world’s most unequal societies both in terms of income and wealth. If we look at income, we can see that the top one percent gets 20 percent of all income, while the top 10 percent takes 65 percent of all income. The real wages of the bottom 10 percent have shrunk by 25 percent between 2011 and 2015. By contrast, the income of the top two percent grew by 15 percent over the same period. The top one percent meanwhile saw their incomes grow by a massive 48 percent. .

The executives, of course, do not only get income from salaries but also from things such as shares. Moreover, wealth inequality in South Africa is staggering. The wealthiest one percent own 67 percent of all wealth, the top 10 percent own 93 percent, while the remaining 90 percent own a meagre 7 percent of wealth.

South Africa has a relatively well developed economy and advanced infrastructure. One of the world’s largest exporters of gold, platinum, and other natural resources; it also has well-established manufacturing, financial, energy and communications sectors.

Despite this, the majority of the people lead a precarious existence. Half of the population live in poverty. To feed a single person nutritiously for one month costs between 530 and 670 rand. A child support grant of 440 rand a month isn’t even enough to meet a child’s nutritional needs, while an old age grant of 1860 rand falls far short of what is required to cover the costs of maintaining a family. This is the situation simply as regards food, before we take into account the cost of transport, rent, electricity, education, clothing, ect. The monthly minimum wage of 3,500 rand is nearly half the amount required to cover the basic costs of a household for one month.

The leaders hold back the mass movement

The South African masses have a proud history of militant struggle. They have constantly come out to change their situation but the leadership of the ANC and the SACP have stubbornly clung to the capitalist system and defended its continued violence against the masses. At each stage, they have held back the enormous revolutionary energy of the masses on the grounds that before socialism can be attained, we must solve the “immediate” problems such as racism, poverty, unemployment etc.

But if capitalism could exist without racism, poverty and unemployment then why bother fighting for socialism? If the system could satisfy the basic needs of the masses, then why bother overthrowing it? Marxists support every struggle of the workers and poor against poverty, misery, racism and oppression. But we also point out that these are inherent parts of the capitalist system. The only way to solve these problems is by breaking with the narrow limits of the capitalist system. Under capitalism, any victory that the working class scores can only be temporary and will be undermined by the capitalists, who control the state and the economy.

Since at least the 1950s, the ANC has held a near monopoly of support from the black, working masses. Now, decades after it won the 1994 elections, the former liberation movement is facing a ruinous crisis. The collapse of its moral authority, after years of corruption scandals and attacks on the working class, is the end result of governing on a capitalist basis. There are huge class contradictions within the party. While the ANC leadership has joined the ranks of the ruling class, living lavish lives and engaging in a frenzy of looting and theft, the conditions of the working masses, for whom the party served as their traditional political vehicle, have either stagnated or worsened.

No future under capitalism, fight for socialism!

We are living a period of great instability, uncertainty, and turbulence on a global scale. The organic crisis of capitalism is having a ruinous impact on the lives of millions of ordinary working class people. Capitalism is going through its deepest crisis ever, leaving a trail of destruction in its wake.

This is a period that will be characterised by wars, revolution and counter-revolution. It is a period of class struggle that will be waged on a far higher level than anything we’ve seen before. Events are moving at a break-neck speed. There will be sharp and sudden turns in the situation. Turmoil and instability are the order of the day. In short, we are in the midst of the most tumultuous period in the history of the class struggle. There is no “going back” to the previous period, as some desire. The old “normal” is gone and we have entered a “new normal”.

The fundamental reason for this is that capitalism has reached a dead end. As Marx explained, once a social system can no longer develop the productive forces in the way it once did, that system enters into a revolutionary crisis, which either leads to its overthrow or to the total ruin of that society. There are two roads facing humanity: socialist revolution or increasing barbarism.

The capitalist system is completely incapable of providing people with a decent standard of living. It is a monstrously oppressive system that enriches a tiny minority of capitalists and crushes the majority of ordinary people. The only way forward for the working class and the oppressed is to overthrow this system. We need a revolution!

If you agree with us, consider joining Revolution South Africa and the International Marxist Tendency!