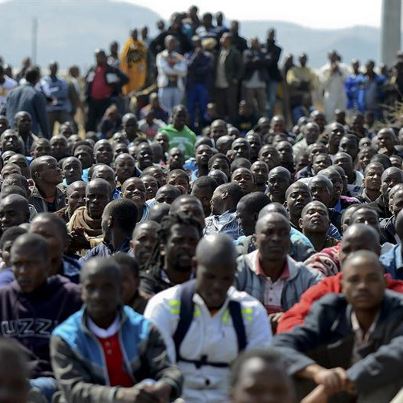 Two weeks have passed since thousands of vineyard farm workers from the area of De Doorns in the Western Cape went on strike. They are demanding that their daily slave wage be doubled to a minimum of 150 rand ($17) per day; currently they are earning R69.39 per day. But there is more behind this genuine issue of low wages. In our “democratic era” since the fall of Apartheid, this is and will probably be the longest period on strike for these farm workers in this region.

In this strike, just like in many other protests this year, workers have taken a lead by their own actions and subsequently the leadership has joined in. But what is lacking is an understanding that the collective indignation lying on the surface of events is itself a manifestation of the contradictions beneath the surface. The current events unfolding in the Western Cape are also the embryonic revolutionary consequences of Marikana, and each sector will soon catch the fever. By the way, we have already witnessed this contagious process when workers in the transport sector have demanded the same concessions that had been made to the Marikana workers.

The employer of the farm workers has only made a revised offer of 80 Rand from the 69 Rand slavery wage, clearly not much of an increase. The abhorrent conditions have been heating up the temperature at the workplace for some time now, but the bosses' offer clearly shows that they have misread the thermometer. The workers instructed their representatives to demand nothing less than $17 per day as anything less is not for mediation. The workers' representatives clearly feeling the pressure from below could not back down from these demands and that led to the deadlock over the employer’s revised offer.

De Doorns produces table grapes, mainly for the export market. It currently provides 8,000 full-time and 8,000 seasonal jobs. It has the ambition to increase exports by 5% but does not state how long this will take. It estimates that this will add R432 million to the province of Western Cape. Yet at the same time these ambition are always followed by a deepening of the extreme exploitation of the workers by the company.

Conditions at the Workplace

Apart from the wages issue there are many other issues which confront workers at the vineyards and farm workers in general. The situation is much worse than during the apartheid era. This was expressed on a radio station, SA FM, by the secretary of NUMSA (National Union of Metalworkers of South Africa), Irvin Jim, and subsequently admitted by a representative from the Agricultural department on the same show today (13/11/2012).

The post-apartheid era has not meant much change of the working conditions of these workers. A report from August 2011, details a long list of rights abuses practiced by the farmers of these areas. The list goes from housing on farms unfit for living; labourers being exposed to fertilisers and pesticides without the proper safety equipment; a lack of access to water while working in dehydrating conditions; the lack of toilet facilities for workers; and pressure put on workers to stop them from joining unions. It also detailed threats of evictions made against residents who had stayed on farms for long periods of time.” [Download the full report on this link: www.hrw.org/reports/2011/08/23/ripe-abuse-0]

Another is that of Labour Brokers. In South Africa, there are three parties involved in the Labour-Broking-System, at least the ones we are concerned with in this article, namely: The Broker, The Client and The Worker. The following describes these role players with their operational roles:

1. Broker: The labour broker handles the interviews, recruitment, HR, discipline, admin, payroll, transport, ensuring all legislative requirements are met, etc. Labour brokers specialize in the supplying of temporary workers to any of the following industries in South Africa: mining, transport, logistics, as well as in the construction sector and other services in the business sector. The broker employs the worker.

2. Client: Buys the labour-power of a worker through negotiations with the Broker

3. Worker: Due to the material conditions confronting society the worker is forced to sell his labour-power to the employer through the broker.

How this process works can be explained by the following example. An employer who is looking for workers, for a normal job offer of say R22 (per hour), would consult a labour broker and negotiate for a lower price (to cut the costs of production), which the broker is always prepared to secure because he is also in competition with other brokers who are always available. After reducing that normal price to the employer (client) the broker will deduct his own share and pay the worker, for example, R16 (per hour), and this worker hired through a broker is expected to do the same amount of work as his work mate who is paid at the normal rate of R22.

The casualization of the work force in South Africa, through the widespread use of labour brokers, has undermined wages and working conditions a lot. These conditions might have been researched and eloquently expressed in journals, but the real pain can only be expressed by the worker on the ground who are left with scars that tell a tale of real exploitation.

The reaction of some union leaders to the struggle of the struggle of the De Doorns has also been interesting. Tony Ehrenreich, provincial secretary of the Congress of South African Trade Unions (COSATU) has taken up the demands of the workers and has stated that there is no justification for the farm workers to be treated in a slave manner with horrendous conditions in the new democracy. The fact that these words come from Tony Ehrenreich, shows the pressure that is building within the ranks of the workers. For many years these same conditions have been met with silence by these trade union leaders. Nonetheless, Ehrenreich has made the right call in the current process unfolding in De Doorns. He appealed to all workers to stay away from work from last Monday.

COSATU’s actions in the Western Cape are informed by an objective factor, and it appears for now they have learnt a lesson from the mineworkers of Marikana. This is reflected in Tony’s analysis in the Business Day journal of the current situation. "They are also making the point that agriculture is the wealth of the nation; like mining, it belongs to everyone. They are making the same plea as the mineworkers for a decent salary and a share of the profits"

Before the The De Doorns workers embarked on their strike they had written to the Department of Agriculture, informing the department of the situation at the workplace and complaining about the slave wages. The department only responded after the farm workers set 30 hectares (74 acres) of vineyards ablaze early last week, and even then it was clear on which side they stood. The vanguard of the elite, the State, through the office of the agricultural minister, immediately issued a statement appealing to the workers not to vandalize the private property of the farm owners. The opposition leader, Helen Zille, who is also the premier of the Western Cape province, echoed the same sentiments. This was not surprising since she is an openly capitalist politician advocating a free market economy, even when this system is driving humanity towards an abyss.

For Marxists, the burning of the farms is an expression of the concentrated frustration among workers, who are the real producers of wealth, but who are at the same time subjected to abject poverty and extreme working conditions. This is the main contradiction that needs to be solved. Unfortunately though, under the current Capitalist system, which is all about profit maximization, this is not possible.

The system, especially now that it is in a historically deep crisis, cannot offer a solution to any of the main problems faced by the workers today. What is needed is a planned social system for the people by the people, through meaningful participative procedures of workers and society in general.

Workers learn from experience, not only from their direct interactions with this brutal system but also through the experience of workers in other sectors. In this sense the struggle of the farm workers is in many ways picking up where the mine workers left. However, the lack of a revolutionary leadership is still limiting the struggles of this militant emerging power of the proletariat to a mere programme of reforms.

In the struggle the farm workers must set up their own rank and file bodies with the task of assessing the conditions and directing their struggles. The workers must only trust in their own forces, but this does not mean that they should break with COSATU. The task of COSATU, or any vanguard of the workers, is to equip the masses with the necessary basic scientific theory to understand the nature and character of capitalism and show a way out of its impasse.

In the long term, any attempt to increase wages to meaningful rates will be met with economic sabotage and a strike of capital by the capitalists of the farming commercial industry. Our response must be to demand an expropriation of the businesses and land owned by these gentlemen. If they can't afford to provide decent living conditions to the workers and poor of South Africa, then the workers and poor of South Africa cannot afford them.

The struggle of farm workers, like the continuing struggle of mine workers, goes to the heart of the nature of the negotiated settlement which brought the apartheid regime to an end. That agreement was the by-product of the revolutionary struggle of the South African proletariat and the poor. The ruling class was so afraid of a revolutionary overthrow of the regime in which they would lose their property, wealth and privileges, that they were forced to make concessions in the field of formal bourgeois democracy. This, they knew, would lead to an ANC government. Therefore, any agreement had to be based on the ANC leaders agreeing to respect private property rights and a guarantee of no nationalizations. That is, bourgeois democracy would be conceded, but capitalism would remain firmly in place.

18 years later it is abundantly clear that within the limits of capitalism not a single one of the pressing needs of the working class and poor masses of South Africa have been solved. In most cases their living conditions are the same as under apartheid or even worse. Yes, they can vote in municipal and national elections and they have consistently voted for the ANC, but the basic problems of agrarian reform, control over the mineral wealth and the economy, as expressed in the Freedom Charter, have not been resolved, not even started to be addressed. A minority of former liberation movement figures have joined the ranks of Capital, but Capital is firmly in charge. The big mining monopolies, multinational companies, capitalist farmers, still dominate South Africa.

The only way forward is to bring the movement back to its founding principles and the understanding that the pressing demands of the masses can only be solved through the expropriation of the country’s wealth so that it is democratically planned and controlled by the working masses for the benefit of the majority.

NOTE: Since this article was written, COSATU leaders issued a statement suspending the strike for 2 months but without any guarantees that the main demand of the workers (R150) was going to be satisfied. The farm workers have continued their strike regardless and this has spread to other towns. Police opened fire killing 1 farm worker and injuring another five, which has only served to increase the resolve of the workers.