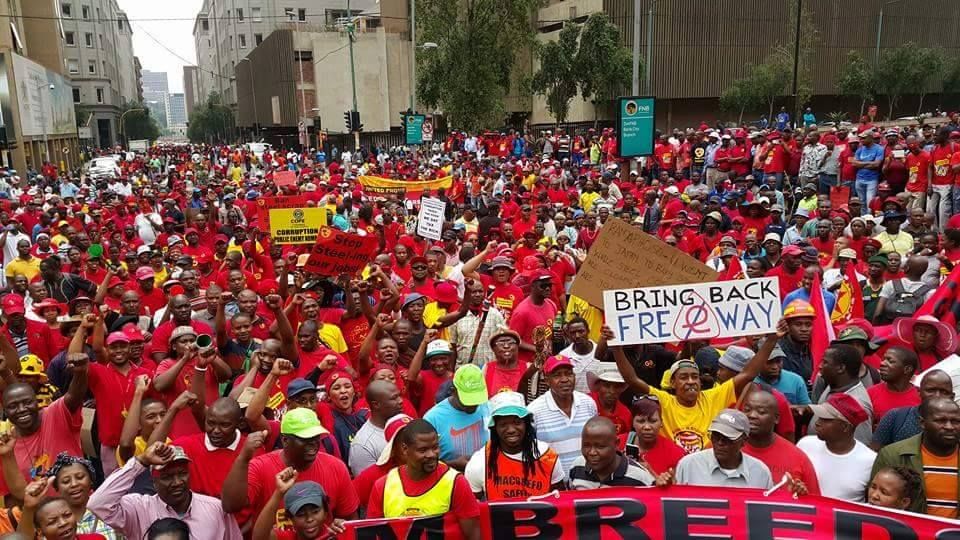 On Wednesday 14 October, thousands of workers heeded the call by the metalworkers’ union, NUMSA for a 24 hour strike and a national day of action against rampant corruption and looming job cuts.

Under the slogan “Capitalism breeds corruption, Defend jobs!’’, the protest action got under way in Johannesburg, the economic hub of the country. Businesses came to a standstill in the central business district and several businesses closed as the march got under way. Early in the morning, thousands converged at Mary Fitzgerald Square in Newton and marched to Beyers Naudé Square, the South African Revenue Service, the South African Reserve Bank, the Chamber of Mines and other government departments, where a memorandum of demands was handed over. Earlier Gautrain services were affected as bus drivers joined the strike - a fact which only seemed to dawn on the bosses when the strike actually got underway!

People came from as far away as the Limpopo province to attend the strike. Some arrived in Johannesburg the previous night and slept under the stars in the iconic square. The march was also attended by fellow trade unions and by members of the Economic Freedom Fighters.

The anger of the demonstrators was palpable. It did not take long for the demonstrators to direct their anger at president Zuma. Zuma’s private residence at Nkandla in KwaZulu-Natal has now become a symbol of government corruption after hundreds of millions of Rands were spent on “upgrading’’ it. One elderly man did not mince his words: “Zuma has brought a culture of corruption into this country. We used to think he is the guy who would liberate us, the poor. But he decided to become a thief.” 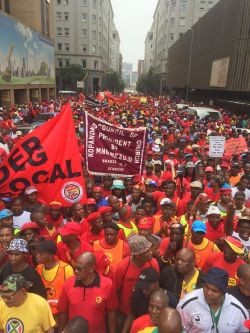 Some of the banners held by the demonstrators were clear: “Away with corruption. Away with the Zuma government!’’ and “Corruption taxes the poor. We say tax the rich!’’

Apart from the NUMSA leadership, the march was also led by Zwelinzima Vavi, the outspoken and expelled general secretary of the labour federation, COSATU, and one of the leading figures behind Unite Against Corruption. In his speech, he told the crowds: “We see a very direct relationship between corruption and the state of our economy, which results in us losing jobs in the thousands. Thirteen million people go to bed every night without anything to eat, while 50 percent of workers are earning below the poverty line. We have had enough.’’

Over the current period, the issue of corruption has received much attention. There is a growing frustration and anger over the government’s involvement in graft, especially with the tender system, which involves the private sector. Two weeks before Wednesday’s march, similar marches were held by anti-corruption organisations under the Unite Against Corruption (UAC) coalition. The coalition calculated that more than R700-billion ($50-billion) has been lost to graft in the last 20 years.

However important it is for organisations like UAC to highlight the issue, it is only the working class which can most effectively fight the scourge of corruption and the capitalist system which spawns it. NUMSA is the country's biggest union and represents the real “heavy battalions’’ of the working class. This could be seen on the day of the march. The entire character of the march was different to the marches in the previous two weeks.  While many can march and hold protests, very few have the “presence’’ of the metal workers union. It derives this “presence’’ from its position in the heart of the South African economy.

NUMSA is right when it says that capitalism breeds corruption. Corruption is inherent in a system with private ownership of the means of production and mutual competition between capitalists for markets. But in South Africa there is peculiar variety of corruption which has its origin after the 1994 negotiated settlement. The revolutionary movements of the 1980’s and 1990’s did not lead to the overthrow of capitalism. Under the theoretical justification of launching a “National Democratic Revolution’’, which meant postponing the fight for socialism to a distant future, the liberation movement led by the ANC set itself the task of creating a so-called “de-racialized’’ Capitalism.

Through mechanisms like the Black Economic Empowerment (BEE) programme, the government set itself the task of creating a black bourgeoisie (nowadays this is called creating Black Industrialists). The problem was that the weak black bourgeoisie would now have to compete in an economy whose most important and profitable industries were already concentrated in the hands of the established big bourgeoisie. The only avenue opened to it was to use its close proximity to high political office and the state as a primary source of plunder through the tender system.

This tender system has now grown into monstrous source of corruption. It has built a whole parasitic layer of crude “businessmen’’  with direct ties to government officials, state functionaries and politicians. In the South African lexicon, this parasitic layer is called “tenderpreneurs” or the “predatory elite’’. This is a completely reactionary phenomenon. This new layer of so-called “black bourgeois’’ derives its income completely from state tenders through corruption. They do not play any progressive role. Through a combination of its own repugnant nature and the organic crisis of capitalism, they do not (and cannot) reinvest the proceeds of their profits back into the economy to develop the means of production, which is the historic justification of the existence of the bourgeoisie. Their only function is syphon off the state and loot its resources.

For this “predatory elite’’, access to state resources is paramount. It is akin to the lifeblood of the host which feeds the parasite. Therefore it must do everything to gain access to political office, including abusing the ANC’s once proud internal democratic processes. At the recently held National General Council of the ANC, report after report came out of party structures, including branches, being manipulated and money being used to influence the outcome of party conferences in favour of some “faction’’ or another, with their eyes on taking control of state resources to further their business interests.

Parallel with this, another process unfolded involving the even more corrupt traditional big bourgeoisie. The formal overthrow of Apartheid brought it face to face with the very real possibility of being overthrown by the militant South African working class. Having to concede democratic rights to the black majority or face being expropriated, the “old guard’’ of the ruling class faced the dilemma of how best to rule society. The massive growth of the proletariat meant that the balance of class forces have favoured the working class.

This meant that the forces of the ruling class were too weak and too small to govern the country directly. Thus, the ruling class were forced to rule society for the last two decades through the leaders of the ANC. The ruling bourgeoisie used all legal and illegal mechanisms of corruption including bribery, BEE deals, and the creation of a revolving door between business and government in order to chain the ANC leaders to itself.

But now the chickens have come home to roost. The indignation at the plague of corruption is one of the reasons why the current crop of leaders are not seen in the same light as leaders of the past. The heightened state of class struggle together with the emergence of powerful forces to the left of the ANC like NUMSA, with its radical calls for nationalisation of the economy, is causing growing concern with the ruling class. Through corrupting a whole layer of the top ANC leaders, they have quickly exhausting the political mechanisms to rule society. This is the reason why capitalists such as Johann Rupert have recently spoken out on behalf of a layer of the biggest bourgeois. They can clearly see that the current state of affairs is causing indignation in large parts of society, with potential for revolutionary consequences.

After the successful march, the question now is “what next”? NUMSA and its allies are fully aware that a march, or even a series of marches and protests will not end the scourge of corruption or the looming job cuts. A 24 hour general strike is a good way for the working class to feel its strength. In certain instances, it can also act as a serious warning to the bourgeoisie.

However, the current state of affairs in South Africa does not leave much room for manoeuvre, for both the government and the capitalists. The organic crisis of South African capitalism, together with the impasse of the system on a global scale, means that the ruling class is forced to put the full load of the crisis on the shoulders of the working class. Strikes, protests and demonstrations, however important they undoubtedly are, are only one half of the equation. What is needed is a revolutionary socialist programme. Only by fighting on a revolutionary programme in the daily struggles of the workers will it be possible to win them over for a root and branch overthrow of capitalism.