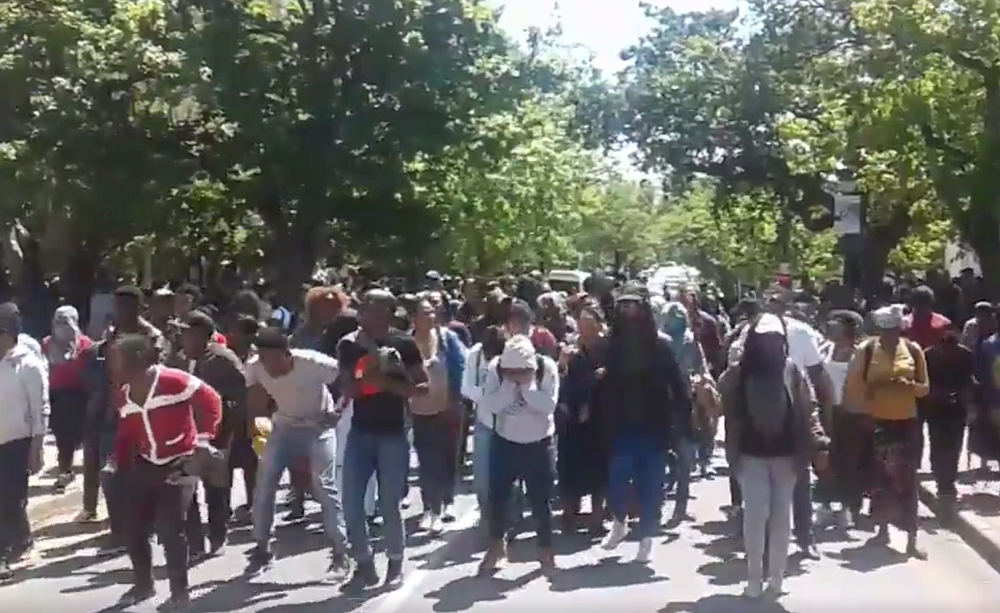 Events over the past week have deepened and accelerated the political crisis. In addition to the relentless student protests for free education, the so-called “war within the government” has intensified. This political turbulence is shaking the country to its foundations.

As a response to the ongoing student protests, the university managements and state apparatus have stepped up repression. Their response to the democratic protests of the students has been heavy-handedness and brute force throughout the country. One tactic of the state is clearly to target those it sees as the leaders of the various ‘Fees Must Fall’ protests. In a clear attempt to intimidate them,  some of the arrested students are kept in high security prisons and not in police holding cells, as is usually the case. For instance, the EFF student leader at the University of Pretoria, Amos Monageng, has been kept at the Kgosi Mampuru prison for the last week while Maxixole Mlandu from the University of Cape Town is being held at Pollsmoor, one of the most violent and most notorious prisons in the country. By locking up student leaders together with violent criminals, the aim of the state is to intimidate the rest of the protesting students.

The state is also using the Tactical Response Teams, a police commando unit which earned notoriety for the Marikana massacre of 34 mineworkers in August 2012. The unit is frequently used to raid campus residences and break up gatherings of students.

Over the weekend there was a calculated move by the police and university management to target Wits University, which has been the epicentre of the protests. In a clear act of provocation the university imposed strict access controls for visitors and also a curfew on Friday night between 10pm and 6am. This was rejected by protesters. The police and security companies tied to the university responded by attacking students even before the curfew was to be enforced. Massive clashes erupted into the surrounding suburbs which lasted for most of the night. By daybreak the streets of Braamfontein resembled a battlefield.

On Saturday the police carried out a midnight raid on the residences of the West Campus of the university. At the David Webster residence, the police shot rubber bullets into the building as well as kicking in the doors and bursting into the rooms. One female students was shot in the hip at close range. In addition to terrorising the student residence, the aim of the raids on the campus was to target the student leaders. In an attempt to thwart any marches, one student leader was taken away from Wits university to Cleveland police station. Another Wits student was arrested on Sunday, but could not be located at any of the police stations in the surrounding district. In the early morning hours reports surfaced that he had been taken out of Gauteng, to Limpopo province.

On Monday morning, after a night in which the students defied the curfew, the protests spread to the middle class suburb of Parktown. Students barricaded Oxford Road and Victoria Avenue near the medical school. There were running battles during rush hour as police fired stun grenades and rubber bullets while students retaliated by throwing stones.

At the University of Kwazulu-Natal, the students who were arrested in September have been denied bail and will only be appearing in court in December. This resembles the notorious ‘90 day law’ used to hold prisoners under the apartheid regime. In an attempt to protect themselves from the police, students from the Westville campus have barricaded themselves into the residence with chains and razor wire. 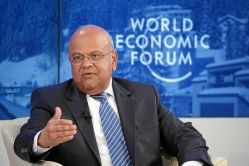 Pravin Gordhan - Photo: World Economic ForumAs the student protests rage on, the crisis of the so-called “war within the government” is rapidly maturing. This war, which is actually a battle between two wings of the capitalist class, reached new levels over the past week. The charge of fraud against the Minister of Finance, Gordhan, on Tuesday is actually a thinly concealed attempt by the clique around president Zuma and the Gupta family to get their hands on the Treasury. The big business wing around the finance minister is clearly not going to let this happen. By Friday, Gordhan had retaliated with an affidavit to the High Court containing a report by the Finance Intelligence Centre, detailing more than 70 transactions worth an incredible R6.8 billion which are thought to be related to money laundering. These are allegedly the reasons why all the major banks have closed the accounts of Oakbay, a Gupta family-owned company.

This “nuclear option” of Gordhan has put the Zuma’s junior-capitalist wing on the back foot and thrown the government into further disarray. Key ministers as well as Ramaphosa, the Deputy President, have thrown their weight behind Gordhan. With the charge against Gordhan and his retaliation, the finance minister has thrown down the gauntlet to Zuma. If he goes ahead and removes Gordhan it could break up the Cabinet, spark a rebellion in the ANC and precipitate a strike of capital similar to the one in December, when Zuma was forced to appoint Gordhan by the “markets” after he removed the previous finance minister.

On Saturday, Zuma’s supporters held a “hands off Zuma” rally in Durban while Zuma himself was in India. At the rally, the ANC Youth League called on Zuma to remove Gordhan and even for the ANC’s former armed wing to take up arms to “defend” Zuma. The political civil war is a reflection of the decline of the ANC and the rising class struggle. The big capitalists see Zuma’s outright corruption and his defiant clinging to power as a destabilising element which could eventually endanger South African capitalism itself. They are willing to sacrifice Zuma to save the system. The ANC is haemorrhaging authority and is in the middle of factional battles which threaten to tear it apart. But with the decline of the ANC the ruling class is also losing the main tool it has used for the past 24 years to hold back the masses.

The EFF and the class struggle

While these events were shaking the foundations of the country, the National Prosecuting Authority, which is close to Zuma, also summoned EFF President, Julius Malema, to court under the apartheid-era Riotous Assemblies Act of 1956 and the Trespass Act of 1959. It is clearly an instance of malicious prosecution against an opposition party leader. Malema has been charged for advocating, at two political rallies, that unoccupied land should be taken over by poor people!

This is a new low for the government. These laws were enacted by the apartheid government as a direct response to the Freedom Charter, which was adopted at the Congress of the People in Kliptown 60 years ago. For these Acts not only to still exist but, more importantly, to be used by an ANC government to suppress dissent from political opponents in the same manner as the former regime, is particularly scandalous. The reason is clear though: the ruling elite sees the radical rhetoric of the EFF and its potential to galvanise the rising dissatisfaction of the masses as a threat to its own rule. It is lashing out in desperation, but every time it lashes out it will reveal itself as the enemy of those same masses.

Malema responded defiantly to the charges: “Those with alternative voices are being suppressed by state institutions, but with me they have met their match. I’m not scared of anything.”

The EFF announced a day of action on 2 November, the same day that Gordhan is scheduled to appear in court. Malema called for a complete shutdown of the capital. The demands are for free education, for president Zuma and prosecution authority director, Shaun Abrahams to stand down, and for the Gupta family to be disconnected from state contracts.

These are all correct demands. However, the EFF is at the same time supporting Gordhan, who belongs to the ANC’s big business wing of Gwede Mantashe. By trying to mobilise the student movement into a defence of Gordhan, the EFF is making a big mistake. Gordhan and the big capitalists that he represents are just as hostile to the workers and youth as the Zuma wing. Gwede Mantashe himself has not only supported the militarisation of the campuses, but has suggested shutting down all universities for a year.

Gordhan personally has been more silent, but he has blamed corruption and mismanagement (i.e. by Zuma and his cronies) as the main obstacle for free education. But corruption is a part of the capitalist system and South African big business is at least as corrupt as the Zuma-linked capitalists. The main problem in South Africa is not this or that president, but the capitalist system itself. By attempting to mobilise the masses behind the big business faction of the capitalists against the Zuma wing, all the EFF will achieve is to give the big capitalists the popular legitimacy which they desperately need.

It is possible to fight the more openly corrupt Zuma wing without being seen to support the big capitalists. The first rule should be not to mix any banners with bourgeois opposition parties! The means to address all the problems of the South African masses do exist, but they are to be found in the big mines, banks and the monopolies who are owned by the parasitic ruling class which Zuma, Gordhan and Mantashe represent. The real allies of the students are not to be found in the ruling class, but amongst the workers and the poor. These movements should be linked on the basis of a programme for the nationalisation of the commanding heights of the economy in order to address the acute problems of the masses.

The tactics used by the state are similar to those used by the notorious Security Branch of the apartheid police and have been used extensively throughout the duration of the protests. But it is actually a profound sign of weakness which is adding fuel to the fire and radicalising the movement. It also reflects the impasse of South African capitalism, which is unable to meet even the most basic demands of the South African masses. Consequently, the movement has passed beyond the question of university fees and is becoming a direct struggle against the state and the Zuma government. Under the blows of truncheons and rubber bullets a new revolutionary generation is being forged.

Although it is difficult to foresee the future, it is possible that during the next few days we could see an intensification of the protests. We have already seen that the protests, a familiar scene in the townships and poor areas, are beginning to move into the middle class suburbs and city centres. The spreading of instability is a major concern for the ruling class. The crisis of the ruling class, the high inequality, high unemployment (especially among the youth), the marginalisation and great suffering of the urban poor, the frustration of the middle class together with the presence of a powerful and undefeated working class provide enough combustible material for a social explosion. The violent crackdown by the state could spark a flame which could spread like wildfire in dry grass.