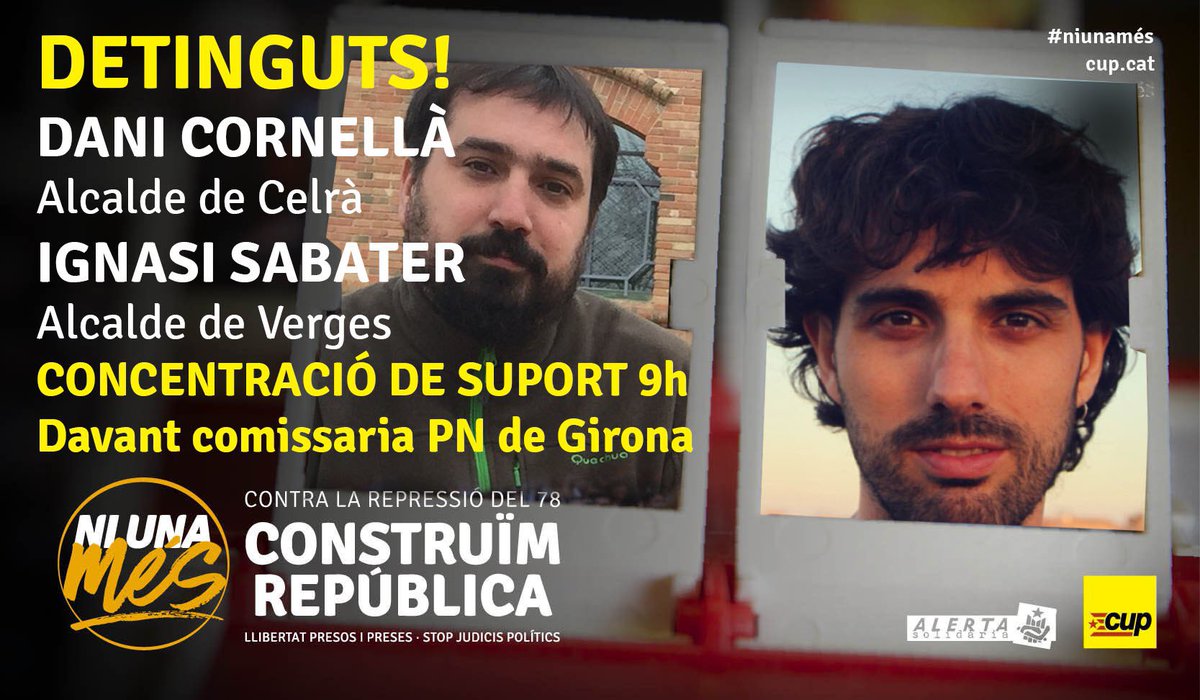 Yesterday, 16 people were arrested by Spanish police in Girona (Catalonia) without a warrant. Amongst those arrested were two local mayors of the anti-capitalist pro-independence CUP, a photojournalist and several activists of the CDRs (Committees for the Defence of the Republic), ANC (Catalan National Assembly), La Forja (pro-independence youth organisation) and SEPC (Catalan Students’ Union).

The International Marxist Tendency would like to express our solidarity with those arrested and their organisation and express our strongest objection at yet another case of repression and criminalisation of the Catalan Republican movement by the Spanish state. We call on working-class and left organisations and activists around the world to do the same.

The arrests took place just a few days before the start of the trial against Catalan political leaders charged with rebellion and sedition for their part in organising the Catalan independence referendum on 1 October 2017.

Those arrested at 11am and 5pm, are accused of “public disorder” for their alleged part in a peaceful protest on 1 October 2018, on the first anniversary of the Catalan independence referendum, which culminated in the blockade of the AVE high-speed train tracks in Girona.

Scandalously, the arrests were carried out without a court order, on the initiative of the Information Brigade of the Spanish police. Those arrested were questioned about their participation in the events, shown pictures, and were later released. This means there was no real reason for the high-profile arrests other than to intimidate and threaten pro-independence activists.

Amongst those arrested yesterday were the CUP mayors of Celrà, Daniel Cornellà, and Verges, Ignasi Sabater, who were detained by balaclava-clad agents of the Spanish police. Their lawyer, Benet Salellas, was denied access to his clients “until they addressed the officers in Spanish”, and could only see them three hours later.

One of those arrested is photojournalist, Carles Palacio, who was taken away by unidentified plainclothes police officers, bundling him into an unmarked car. Palacio was shown pictures of the AVE tracks blockade in which he is clearly seen as wearing a “PRESS” arm-band. It seems that covering a peaceful protest as a member of the press is now also a crime.

The police also tried to arrest another member of the SEPC at the Girona University, but the activist managed to avoid them by entering university premises, which the police cannot enter without a court order or permission from the rector. The activist remained on the university premises all night, protected by dozens of others and a commitment from the rector that he would not give the police permission to enter.

Dozens of people gathered during the day outside the police headquarters in Girona, and in the evening thousands rallied in towns and cities across Catalonia to protest this new provocation of the Spanish state. See below the protest in Barcelona:

This latest wave of arrests is part of a broader campaign of criminalisation of the Catalan Republican independence movement. As well as the high-profile cases of political leaders who are in jail or in exile, there are dozens of other, less-known activists who have been fined or are being prosecuted on all sorts of charges (including terrorism, sedition, rebellion, hate crimes etc.) in an attempt to cow the movement into submission. They will not succeed.