Globalisation
Share
Tweet
This is a report of the massive demonstration in Seville to protest against the European Union summit. The very militant mood of the demonstrations reflected the anger of the youth against the policies of the right wing in Spain and internationally. Despite the propaganda campaign of the government, which was aimed at scaring people off and turning them against the anti-capitalist mobilisations, the balconies were full of people shouting words of encouragement and saluting with their raised fists. By Julio Cruz, from the Spanish Marxist paper El Militante. 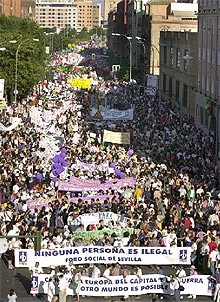 How ridiculous the European rulers look! Hidden like rats in their luxurious hotels and their conference rooms, protected by thousands of armed men and four kilometres of fences. The defenders of Capital watching the Spain-Korea football match and reading the day's papers during half time. Their papers tell them they are right. "The general strike in Spain on June 20 has been a failure." …these are their fantasies. What a contrast with real life outside, comrades! What a difference with hundreds of thousands of workers and trade union activists from all over the country who haven't had a moment of rest for the last week: strike pickets, mass demonstrations on June 20, students' demonstration on June 21, and the mass demonstration of 200,000 in the streets of Seville on June 22.

The very militant mood of this demonstration (under the banner of "Against the Europe of Capital and War") reflects on one hand the anger of the youth against the policies of the right wing in Spain and internationally, and on the other hand their willingness to fight against them. The slogans against Berlusconi, Aznar, Blair, Bush, and the others were very clear: no repression against immigrants, no cuts in public services, no to imperialist war. Another slogan which has been repeated in all demonstrations is: "Si no hay solución, Habrá revolución." ("If there is no solution, there will be revolution.")

Despite the propaganda campaign of the government, which was aimed at scaring people off and turning them against the anti-capitalist mobilisations, the balconies were full of people shouting words of encouragement to the demonstrators, saluting with their raised fists and throwing buckets of water to freshen up the tidal wave of people marching. As was the case in Genoa and Barcelona, Seville confirms once again that red flags dominate in the demonstrations.

The main aim of the massive police presence was to scare off and to justify repression under the excuse of the alleged presence in Seville of "many violent organisations determined to destroy the city." It was all a lie. And even sections of the police, sick and tired of being used to break up mobilisations like in Franco's time, realised this. They were sick and tired of being used as scab labour to distribute right-wing newspapers (like El Mundo) on the day of the general strike. In fact, on the 21st there was a demonstration of more than 2,000 police officers in Plaza España, outside the Government's Delegation. One of the police trade union leaders was shouting down the megaphone: "A government that orders us to smash workers on strike must go!" - and all the police officers present shouted back: "The government must go!"

The workers at the hotel where European dignitaries were staying were not cowed; on the day of the general strike the whole workforce stopped work and forced the European rulers to arrive a day later.

The coincidence of the June 20 general strike with the mobilisations against the European summit meeting has played a positive role: the president of the European Trade Union Confederation, no doubt a most moderate man, was forced to talk of the possibility of a Europe-wide strike against the reactionary policies of all governments on the continent. Marxists all over Europe agree with this perspective, since a European general strike would mean an important step forward in the internationalist consciousness of workers and youth. However trade union and worker activists need to push their own leaders so that their words are translated into real struggle. In fact the same trade union leaders refused to participate in the call for the Seville demo on June 22, and this is what prevented this demonstration from being the largest of all the anti-globalisation protests.

A summit against the workers

One of the most important discussions on the agenda of the summit was the immigration policy. The summit agreed to introduce new barriers to the granting of visas for countries which did not need them previously, as is the case with many Latin American countries and Spain. The Single Asylum Strategy basically means making immigration laws tougher and thus increasing the repression against immigrant workers. Aznar, Berlusconi and Blair are the most vocal defenders of a programme of forced repatriation, which is implicit in this strategy. But the interests of the ruling class do not always coincide with the policies of their governments. For instance the Italian bosses' organisation is complaining that Berlusconi's immigration laws make it more difficult for the employers to hire cheap immigrant labour which they need. Chirac agrees with this line and thus has not supported Aznar on this point.

Another important question discussed was fixing the year 2002 as the deadline for ongoing discussions on the entry of new countries into the EU. These are Cyprus and Malta in the Mediterranean; Hungary, the Czech Republic, Slovakia, Poland, Lithuania, Latvia and Estonia in the East. This is in the interest of the German ruling class so that the European subsidies, which is now directed mainly at Mediterranean countries, is shifted to the East, thus benefiting German investment in these countries. With the imminent threat of recession, Germany needs to make sure more than ever that European aid stays in her court, rather than going to Spain, Greece or Italy. But France, which has the largest agricultural sector in Europe, wants to continue protecting her own economy through public expenditure. This is the reason for the measure that Chirac introduced at the summit: balanced budgets in 2004 will only be achieved if there is economic growth over 3%. In the current recessive period that we are in, this means a free hand for French regarding public expenditure, since it is clear that it won't reach this level of economic growth. In this context the Spanish capitalists have little to celebrate since their own position is extremely weak and at the same time they are facing a mobilised working class movement.

The slogans of the struggle

It is crucial that workers and youth are aware of the real content of the aims of the ruling class internationally. The mass media has tried and will keep trying to confuse the real issues and spread the idea that these summits are in the interests of all European citizens. Marxists are fighting against these lies. We must also oppose the reformist ideas of those who want to democratise the international institutions of Capital, be they the IMF, the World Bank or the European Council. We must fight against these institutions in the same way that we are fighting against our own national governments. Revolutionary activists must fight against any confidence in the capitalist system amongst the widest masses of the working class.

Our slogans therefore must be: Down with Capitalism! For a European Socialist Federation! Today there are millions of people opposed to this system and this is scaring the ruling class all over the world. This system is like a zombie that maintains itself by sucking the blood of working people and destroying the environment of the planet. In three days of mobilisations in Seville, the comrades of El Militante and the Sindicato de Estudiantes (Students' Union) have distributed tens of thousands of leaflets, papers and posters explaining these ideas and with these slogans. It would not be an exaggeration to say that this has been the most widely-read material. And we will reap the fruits.