Share
Tweet
The early origins of International Women’s Day are closely linked to the struggle of women textile workers. This year’s International Women’s Day finds 240 textile workers, mainly women, occupying the premises of the Sel-Fex company in Caracas. Their struggle is no longer just a struggle against the bosses for concrete demands, but a struggle to defend the Bolivarian revolution and to build a better future for Venezuelan working women and all working people in general.

The early origins of International Women’s Day are closely linked to the struggle of women textile workers. On March 8th, 1847 women workers in the textile and garment industries in New York went on strike to protest against low wages, long working hours and inhuman working conditions in one of the first recorded strike movements by women workers. They were brutally repressed and the police fired on them.

On March 8th, 1908 responding to a call by the New York City Social Democratic Women's Society, more than 15,000 women textile workers from the Lower East Side marched for a shorter working week and political rights. 1909 saw the massive strike by 20,000 women textile workers in New York which lasted fourteen bitter cold winter weeks. And then in March 1911, a fire in the Triangle Shirtwaist factory in New York resulted in the deaths of more than 100 women workers, killed either directly by the fire or by jumping from the eighth floor because the doors had been locked in order to prevent them from taking unauthorised breaks. All these events and struggles are commemorated on International Women’s Day which was established at an international meeting of socialist women at the proposal of German revolutionary socialist Clara Zetkin. 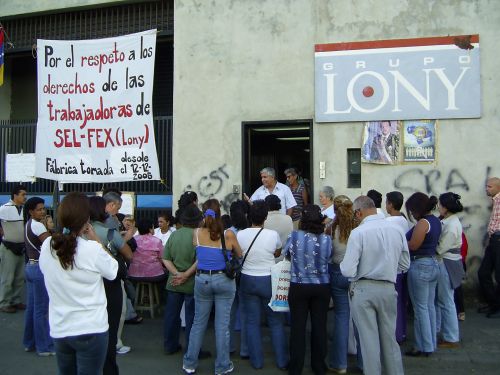 Credit: Corriente Marxista Revolucionaria
This year’s International Women’s Day finds 240 textile workers, mainly women, occupying the premises of the Sel-Fex company in Caracas. On December 12, the owners of the Lony Group (of which Sel-Fex is a part), Eleonora Steiner and Tom Zaima, decided to close their operations, leaving massive debts to the workers, the state, the suppliers and the banks. The workers, organised in Sutratex, a UNT-affiliated union, fearing that the owners would remove machinery, finished products and raw materials decided to occupy the premises and are now demanding expropriation under workers’ control. They have maintained the occupation for nearly three months, including the period over Christmas and New Years. This despite threats by the son of one of the owners that he would not be responsible “if seven men wearing masks and armed with guns enter the premises and attack them”.

Sel-Fex has been producing swimwear and women’s underwear for the different labels of Grupo Lony for about 60 years. Most of these women have been working at Sel-Fex for 15, 30 or even 40 years. A group of 40 women were still working there, despite the fact that they had already reached retirement age, in order to be able to sustain their families. As one of the workers commented, while their wages were only about 100,000 Bolivars a week (about 30 Euro), some of the swimsuits they were producing were being sold for 100,000 Bolivars a piece.

The working conditions were appalling, like those of workers in the many textile factories around Sel-Fex. They were allowed only a 30-minute lunch break. The canteen where they used to eat lunch was in the top floor next to the electricity generator and they sat on the same uncomfortable seats they used for work. Most workers had back problems, and many had made themselves rudimentary pillows to alleviate the pain of sitting for 8 hours. The food they were given by the company (in order not to pay the workers the legally established food vouchers) was very poor and on occasions it had passed its sell-by-date.

Work was exhausting and the supervisors controlled the workers, stopwatch in hand, to see how many pieces they were producing in an hour. They were supposed to produce approximately 70 pieces (bras or knickers) an hour. At the end of the week, if they had reached the production target fixed by the company they would receive a miserly 5,000 Bolivar bonus (1.5 euro). In 1997 the company forced the workers to sign an agreement handing over their social security payments to the company, something which is completely illegal.

The occupation of the factory is also the result of the new mood in the Venezuelan labour movement since the government expropriated Venepal and CNV at the beginning of 2005 and started to run them under cogestión (a form of workers’ control and management). Earlier last year the workers at Sel-Fex started to discuss a cogestion agreement with the employers. At the beginning the employers seemed keen, since they saw it as a way in which they could get cheap loans from the government. But when the workers raised the demand that 50% of the shares should be handed over to them, the employers abandoned the talks and later declared bankruptcy. 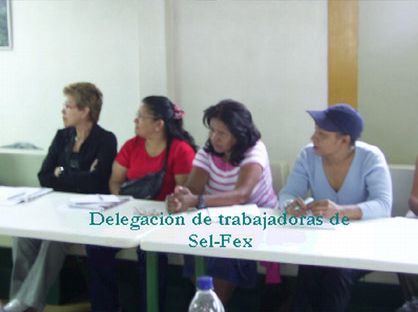 Sel-Fex workers at the meeting of the Revolutionary Front. Credit: CMR
It was at this point, on December 12, that the workers decided to occupy the premises and started to raise the demand of expropriation under workers’ cogestion. The factory has 600 machines which are 90% productive in an industrial warehouse of 2000 square metres, and the company owes thousands of millions of bolivars to the state and the workers. The case for expropriation is sound and clear, and this is what the workers want at this point. A delegation of Sel-Fex workers participated in the founding meeting of the Revolutionary Front of Workers in Companies Occupied or under Cogestion. One of them explained why they are fighting for expropriation under workers’ control: “I want to continue working, but the company no longer belongs to the employer but is ours. We can mange it ourselves for the benefit of the revolution and the economy of the whole country”.

For them, this struggle is no longer just a struggle against the bosses for concrete demands, it is a struggle to defend the Bolivarian revolution and to build a better future for Venezuelan workingwomen and working people in general. The premises are now decorated with a big poster of President Chavez in his military fatigues next to a poster of the new Bolivarian trade union, the UNT.

Sel-Fex workers will be participating en masse at the International Women´s Day march called for today in Caracas. They will also be marching next Tuesday together with the Revolutionary Front. In a meeting yesterday, president Chavez encouraged women to “fight for a Socialist Venezuela, because within capitalism it is impossible to put an end to the discrimination against women”.

Women workers at Sel-Fex are clear that the socialism they are fighting for is based on the workers controlling the economy. This is what they have learnt in their bitter experience over the last few months.