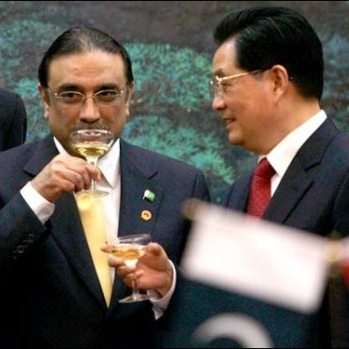 In an astonishing move, a Christian member of Pakistan’s National Assembly, Asiya Nasir, supported by more than a dozen lawmakers including Islamicist mullahs, moved a new amendment to the 1973 Constitution seeking a ban on non-Muslims drinking alcohol, but the bill didn’t get very far.

“I’m saddened and dejected today,” said Asiya Nasir. “I strongly stand by my bill and will have another go at it,” she told the media. The National Assembly Standing Committee on Law and Justice rejected the bill on Tuesday saying, “Such legislation will earn a very bad name for the country.” Both statements reek of hypocrisy – a social, ethical, moral and cultural norm prevalent in today’s society.

According to several reliable institutes of social analysis, the per capita consumption of alcohol in Pakistan is even more than that of India. Deaths from the intake of ‘raw’ or methylated alcohol are more than those inflicted by the scourge of terrorism. However, all those who die from this tragedy belong to the deprived, poor and oppressed classes. There is much fuming about the sin of drinking alcohol by the mullahs and the so-called pious preachers of morality and ethics, while the use of hashish and other intoxicating, addictive drugs on a massive scale is either conveniently obscured or portrayed as a 'minor' sin by these revered masters of social purification. After all, the drug trade is one of the cornerstones of Pakistan’s mainstream black economy. This tumour has surpassed the formal economy and reigns over politics, culture, religious sectarianism and terrorist groups, all exacerbating mayhem and conflagration.

The rich, famous and the mighty consume the most expensive liquors and indulge in vulgar hedonic orgies incessantly. However, the odious cultural levels of these upstarts are flagrantly exposed even in these indulgences. They are hardly ever accused or indicted. It is the poor and the wretched of the earth that are denied any recreation or entertainment in their lives. Films are ruthlessly censored and for decades there have hardly been any good films to watch. There are no workers' clubs or resorts, no real places of social interaction except religious prayer centres. Festive occasions such as marriages are conservatively organised and historical-cultural festivals are either banned or caricatured by the reactionary clergy. The peasants, oppressed workers and youth from the toiling classes can only afford to buy cheap adulterated liquor. Alcoholism and drunkenness are a curse and vice not just of the individual who indulges in them but also exposes a sickened, intolerant and a decaying social system. It impoverishes the soul and devours character and culture. These vices become more widespread as the socioeconomic crisis deepens and people lose hope and heart. The retreat of the mass movements, the betrayals of the closest relationships, treachery by those they trusted and relied upon, vexes human existence. Above all, such behaviour reflects the alienation that inhumane and exploitative capitalism wreaks upon the toiling classes. Individuals react to it in deleterious ways, from religious frenzy to alcoholic drunkenness, crime and drug addiction.

This ‘Bill’ also reflects the reaction that is pressing down on society. The use of a Christian MNA to impose the vicious religious edicts of the mullahs upon a society that is suffocating in a cultural gas chamber, is yet another example of draconian laws that intrude into the private lives of citizens. The intelligentsia, the media and the political elite, sodden in corruption, hypocrisy, deceit and plunder impose this façade of ‘public opinion’. These honchos of the rotten socio-economic system engineer this so-called public opinion, inculcate it into the social psychology and then use these reactionary ‘norms’ in the name of the 'people's will' to facilitate conditions and prejudices that perpetuate the rule of this horrid oligarchy.

Apart from the class conflicts, Pakistan is a prison house of oppressed nationalities, a smothering social stigma for women, and prejudiced, contemptuous perdition for religious minorities. There has been an ostentatious campaign by so-called civil society, the ‘liberal’ Musharraf regime, and the ‘secular parties’ against these vices, yet the plight of these oppressed sections of society has only worsened. The induction of women into the parliament has only heightened the daunting insecurity amongst women in society. This is reflected in the increasingly stifling veiled dress codes and agonisingly escalating gender segregation and the impairing of women’s confidence.

The religious minorities have suffered the same fate. Violence against the Christians and Hindus has reached frightful proportions. Nevertheless, there is also a severe underlying class differentiation within the religious minorities. Those who end up representing minorities in the assemblies are from wealthy Hindu and Christian backgrounds and have little in common with the rest of their coreligionists, who are subjected to some of the most excruciating menial and filthy jobs, with despicable salaries and suffering from social contempt and scorn. Those ‘religious minorities’ leaders, that are elevated to lucrative governmental and social positions become part of and advocates of this system, which bases itself on the prejudices of religion, ethnicity, nationality, caste, creed, race and other divisions of the past.

The emancipation of the religious minorities is not possible by limiting the endeavours for the protection of religious minorities and the struggle for religious rights. The prejudices, discrimination and exploitation are too deep-rooted and can only be cut out by cleaving this system. This is only possible by the socio-economic transformation of society and the overthrow of the capitalist system of coercion and exploitation of all sorts. The hypocritical social stigma against the use of alcohol has been aggravated in the last few decades, especially after the imposition of the vicious Zia dictatorship that thrust Islamic fundamentalism on the masses to perpetuate its despotic rule. Private and personal lives are infringed upon and the Islamic vigilantes, then and now, spy upon their neighbours in their homes and workplaces.

The use of alcohol in politics to defame and degrade individuals has long been a sinister practise by reactionary tendencies. Zulfiqar Ali Bhutto in the early 1970s, when he introduced radical socio-economic reforms, proclaimed in a public meeting in Lahore, “Yes I drink alcohol but I don’t suck the blood of the poor and the oppressed”. He was cheered and given a thunderous applause by the mammoth rally. But this was the initial period of Bhutto’s radical reforms, which were beginning to improve the lives of ordinary people. However, the same Z.A. Bhutto was forced by the surging religious right wing to ban alcohol in 1977, when these reforms inevitably failed to deliver within the confines of capitalism.

The intrusion into the private lives of individuals is mainly a petit bourgeois trait. It’s the law of history that petit bourgeois tendencies are organically incapable of separating personal questions from political questions. It is in times of such despair and disillusionment when these religious and other reactionary forces come to the fore. Once the tide of class struggle resurges this obscurantist inertia will be smashed with a sea change in the social and cultural atmosphere. But that transformation can only be sustained with the victory of the working classes through a revolutionary insurrection.