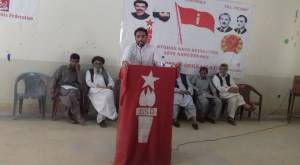 On 27 April, the Baloch Students Organization (Pajjar) organized an event commemorating the 38th anniversary of the Saur Revolution of Afghanistan. The event was held in Baluchistan University. Besides students from the Baloch Students Organization, there were also students from the Pashtun Students Federation, the Baloch Action Committee along with progressive teachers, writers and intellectuals. All participants congratulated the BSO for organizing such an event. 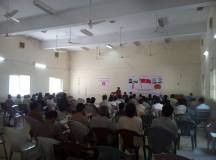 The meeting was led by comrades Bilawal Baloch and Auranzeb Baloch and presided over by the central organizer of BSO Zareef Rind. Meanwhile the main guests were Arbab Ghulam Kasi and Azam Zarkoon from the Awami National Party, Ali Baran Nasir from the Pakistan Peoples Party, Manzoor Baloch from the Brahvi department of Baluchistan University, Dr Akbar Khalqi, Abdul Rab Agha – a companion of Noor Muhammad Taraki, the leader of revolution - Razaq Ghurzang from Wesh Zilmiyan and Wali Khan from the Pashtun Students Federation. 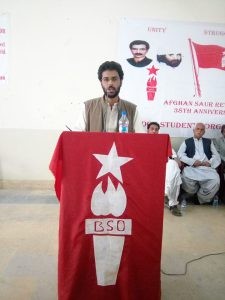 Changaiz Baloch opening the sessionSohail Baloch opened the meeting with an anthem of the BSO.  Later an anthem of Khalq party of Afghanistan was sung. The Central Deputy Organizer of the BSO, Changez Baloch, then opened the discussion, by highlighting the achievements of the Saur Revolution and explained how a revolution in a primitive semi tribal and semi feudal society achieved tremendous results. Through radical measures peasants were alleviated from chronic poverty and a large part of the population who were being strangled by usurers were emancipated. After the revolution, the sale of women was also banned and the plight of women was transformed. This revolution also had a deep impact on the literature and languages of the region and imbued them with new life. This could not be tolerated by the imperialist powers who subsequently sabotaged the revolution. 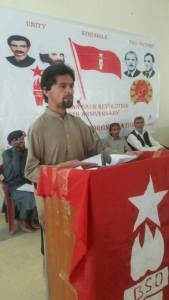 Comrade Razzaq reading solidarity messagesFollowing the opening speech, a message by secretary general of the Khalq Revolutionary Party from Afghanistan was read out. Unfortunately, he couldn't attend the meeting due to visa problems. In his message he praised the history of struggle of the BSO and this meeting. In his message he also said that this meeting has once again brought to life the historic class unity of Afghans and Baluchis which will be an important milestone in our revolutionary journey. This journey will emancipate both nations from slavery. He said that the Khalq party promises to cooperate with the BSO in their struggle and will get strength from the struggle of the BSO for their rights.

Other guests also spoke at the event and highlighted the importance of the Saur revolution in the whole region and how it helped to emancipate millions of people. The speakers also emphasized the revolutionary role of youth in the coming struggles and how they can learn from the lessons of the past in order to build their movement on solid foundations. 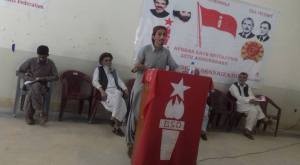 Comrade Zareef Rind speakingAt the end of the meeting, comrade Zareef Rind summed up the discussion and said that the Saur revolution is the heritage of all oppressed peoples of the region and that they can learn a lot from this heroic struggle of the past. He continued by saying that today, we have to face much more difficult conditions due to the grip of imperialist supported reaction and Islamic fundamentalism over the region. He said that today none of the established parties are standing on a revolutionary program and this leads to disappointment among the masses. 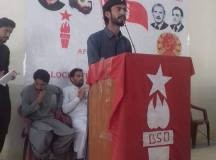 Orangzaib Baloch chairing the sessionThe youth however, is turning towards the revolutionary past and is drawing the correct lessons from it. He also said that reactionary forces are trying to incite differences between Pashtun and Baluchis. Only a revolutionary program can counter this and crush such reactionary forces. This meeting was an important step forward in this direction. Baluchis have historical links with Afghanistan and even today both can trust one another and welcome each other. Imperialist powers in their lust for loot and plunder are demolishing civilization in this region. It is our duty to raise the correct slogans which can link up the struggle of the oppressed peoples of the whole region. 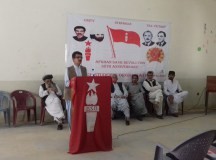 Manzoor Baloch speakingThroughout the event revolutionary songs were sung by comrades Karim Parhar, Master Zafar, Jilani Saj, Mohsin Faghar from Bolan Brahvi Academy and Jahanzeb Baloch from the Action Committee. This was met with great enthusiasm by the audience. 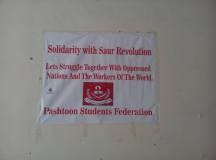 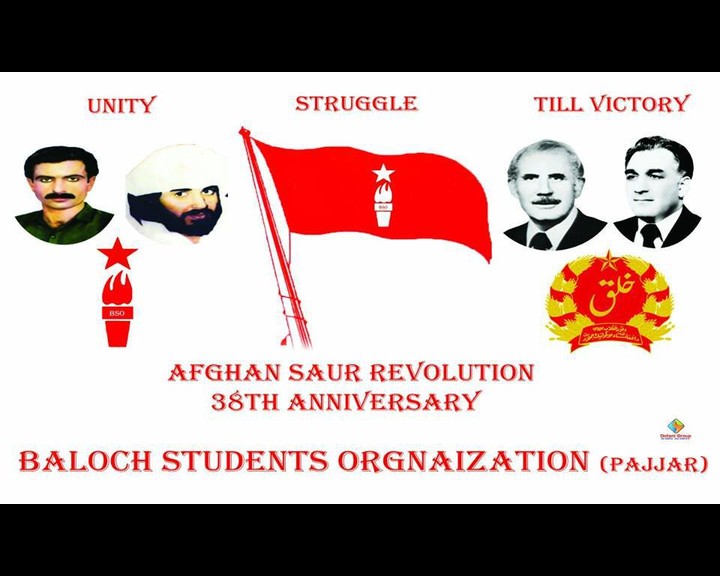 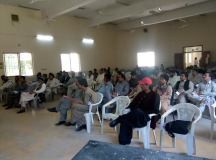