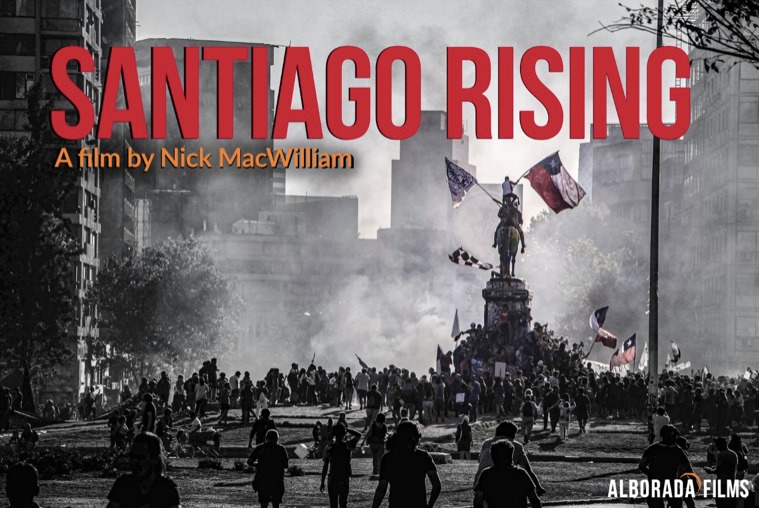 Santiago Rising, the new Alborada Films documentary by Nick MacWilliam, is a powerful portrayal of the insurrectionary uprising that shocked Chile at the end of 2019, Diego Catalán writes.

On 13 February, the Marxist Student Federation will host a screening of Santiago Rising followed by a Q&A session with the director, Nick MacWilliam, and Carlos Cerpa (from the IMT Chile-Octubre).

On 18 October 2019, the people of Chile rose up in rebellion against the ruling class as they had not done since the time of the Pinochet dictatorship, at the end of the 1980s. That night, the streets and highways throughout the country were lit with fires surrounding thousands of barricades, while flames consumed dozens of underground stations, supermarkets and pharmacies of the oligopolies, as well as the corporate premises of companies that control basic services that were privatised 30 years ago. The slogan that spread like wildfire in the following days was precisely: “It's not 30 pesos, it's 30 years.” The spark that lit the fuse was the rise in the price of an underground ticket by 30 pesos (3p GBP). But this represented merely the last drop in a glass that was overflowing with the working class’ accumulated rage after years of abuse and suffocation through austerity and debt.

Following almost a month of growing protests, which overcame brutal police repression (with more than two million people in the streets in a single day), and faced with the threat of a total and indefinite strike, the government was hanging by a thread. They had to play their final trump card. They agreed to a behind-the-scenes pact with congressmen to call a plebiscite that would decide on the convening of a Constituent Assembly. Almost a year later, the Constituent Assembly was supported by more than 78 percent of the vote, and despite the many limitations incorporated since its inception, this was taken as an overwhelming popular victory.

British filmmaker and activist Nick MacWilliam travelled to Santiago, the capital of Chile, in December 2019, two months after the popular uprising and one month after the constituent pact, to turn his lens on the harsh truth hidden by the official media. The film takes as its starting point Plaza Italia, renamed Plaza Dignidad after the revolt. Located at the heart of the city, it was the epicentre of this and previous rebellions. The documentary faithfully reflects both sides of the coin. On the one hand, we see the joy, colour, diversity, and energy of a people who feel that they have finally awakened from a long slumber and are making their way to a hopeful future. On the other, we see savage state terror, and the tragic results in the form of death and mutilation. This chiaroscuro portrayal evokes in the viewer a mixture of sensations: compassion and anger, bitterness and illusion, and above all, a fervent desire for emancipation.

From this central axis, the film moves in concentric circles: geographically, towards peripheral points of the capital, but also historically, establishing a connecting thread between past struggles and the current movement, as well as with the battles that are to come. In the same slums that were a bastion of resistance to the dictatorship, today a local radio defies state censorship; or a national hip hop superstar blends her voice with that of hundreds of people in a protest song. Women tortured by the military in the ‘70s and ‘80s today are part of an army of women who denounce police harassment through the anthem El violador eres tú (‘A Rapist in Your Path’), performed around the city in moving acts of choreographed protest. Without any urging, a microphone spontaneously reaches the hands of Santiago’s anonymous heroes - students, activists for environmental rights, fighters for the demands of indigenous peoples, neighbours of territorial assemblies - and permits them to tell their truth, their frustrations, and their dreams.

The documentary, like the very history of this movement, has an open ending and leaves many questions hanging in the air. Why has a movement with so much energy, so fierce and beautiful at the same time, still not managed to secure victory? What conclusions can we draw in order to return to the battlefield and emerge triumphant? What lessons do the Chilean October provide for the struggles of other nations? As Marxists, it is our duty to address these questions with an internationalist and fraternal perspective.

Solidarity with the Chilean working people and the oppressed peoples around the world!