Iraq
Share
Tweet
The execution of Saddam Hussein could not have been a more cynically calculated PR event if a banner proclaiming "mission accomplished" had been placed above the gallows. His hanging will not provide a day of relief from the misery, humiliation, and violence the Iraqi people are enduring under the occupation, or absolve imperialism of its role in Saddam's rise to power and decades of brutal rule.

The execution of Saddam Hussein could not have been a more cynically calculated PR event if a banner proclaiming "mission accomplished" had been placed above the gallows. His hanging will not provide a day of relief from the misery, humiliation, and violence the Iraqi people are enduring under the occupation. While some Shiites celebrated - an understandable reaction given the repression they suffered under Saddam's regime - this mood will be extremely short-lived. It is very likely that the execution will only exacerbate sectarian strife between the Shiite and Sunni, as was indicated by two bombings following Hussein's death that killed 68 people and injured 130.

Nor will Saddam's death save one penny of the hundreds of billions of dollars that the U.S. government is spending on the war at the expense of American workers' standard of living and any future economic stability. When it comes to U.S. soldiers, not one life will be spared as the death toll surpasses 3,000, a fact that the execution was intended to distract the American public from.

If anything, the execution appears to be part of a strategy to prepare for an escalation of the war. While attention was focused on Saddam's impending hanging, the Pentagon announced that it would send an additional 3,500 U.S. soldiers to Kuwait. Also during this period, top administration officials met to discuss increasing troop size by up to 20,000 or 30,000 by speeding up the deployment of Army brigades and delaying the departure of Marine regiments. Preparations are in the works for a big offensive and the timing of Saddam's death was meant to play a role in distracting the public's attention from this.

Saddam's hanging was also meant to increase Iraq's occupation president Maliki's standing with the Shiites, independent of Shia cleric Moqtada al-Sadr. The Bush Administration has been pressing Maliki to crack down on the Shiite militia's associated with al-Sadr, but Maliki has been resisting this because without al-Sadr's inclusion in the government, he would loose even the appearance of Shiite support and the already weak regime could rapidly unravel. In pushing for Saddam's execution Maliki hoped to appease the Shiite population while the U.S. builds for an offensive that will most likely be aimed at al-Sadr's militias, which control many of the poorest neighborhoods in Iraq.

It is significant that Saddam was sentenced to death for only one of the major crimes he was charged with. He was found guilty of the killing of 146 Shiites in DuJail in 1982, while charges regarding the much larger massacre of Kurds in 1987-88, and the brutal repression of the Kurds and Shiites in 1991, were left unexamined. This is no coincidence. In 1987-88 the U.S. was backing arm sales to Iraq in its war against Iran. While Saddam was gassing Kurds, Donald Rumsfeld was sent to Iraq, in part to assure Saddam that the U.S. had no problem with these atrocities as long as he continued to act according to U.S. interests.

In the 1991 repression of the Kurds and Shiites at the end of the Persian Gulf War, it was George Bush Sr. who encouraged their populations to rise up against Saddam and then allowed them to be slaughtered, rather than risk a popular revolt that could get out of the U.S.'s hands. The U.S. played a big role in these atrocities and others under Saddam's rule. If Saddam's trial had been allowed to go on, it is possible that U.S. connivance with his regime would have been exposed under too public a light. Therefore, from the vantage point of U.S. imperialism, it was better to let Saddam become the fall guy on the one charge the U.S. had no direct connection with rather than open up the other charges.

Saddam may have been a brutal despot, but he was U.S. imperialism's bad boy in the region throughout most of his career. He was their man when it came to eliminating communists, trade unionists, and anyone else resisting capitalist exploitation. As long as this was the case, the White House had no more of a problem with his crimes than it does with any of the other bloody dictators it props up throughout the world. It was only after Saddam had outlived his usefulness and overplayed his hand that the U.S. suddenly discovered that they had a problem with Saddam's thuggery. 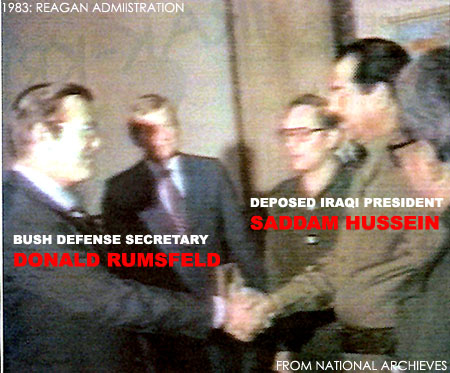 As bad as Saddam Hussein was, he could not possibly compare with the brutality of U.S. imperialism. Launched on the lie that Iraq had weapons of mass destruction, the current occupation of Iraq has resulted in the deaths of an estimated 655,000 Iraqis since March of 2003. It was under George Bush Sr., Bill Clinton, and then Bush Jr. that a U.S.-led embargo of Iraq was imposed which resulted in the deaths of up to 1.5 million Iraqis between 1991 and 2003. Of course, only Iraq is being dealt with here. Imperialism's exploitative and oppressive policies are not unique to this country alone. They ensnare most of the world. Comparing the crimes of Hussein to the crimes of imperialism is like comparing the actions of a petty shoplifter to the organized mass theft of the mafia.

Imperialism has no interest in achieving a peace worthy of expression in Iraq. Any peace under imperialism will only result in further oppression, exploitation, and crisis. The interests of imperialism are diametrically opposed to the interests of the world working class, including in the U.S. It will take an international movement of the working class against imperialism and capitalism to bring about a lasting solution to the problems of war and all it brings with it.

In this country that means starting by massively mobilizing the widespread opposition against the occupation in Iraq around the demands: "No to the war on workers at home and abroad!" "Bring the troops home now!" and "Money for jobs, health care, and education, not war!" With the likely escalation of the war after Hussein's execution, it is all the more urgent that the anti-war movement redouble its organizing efforts now.