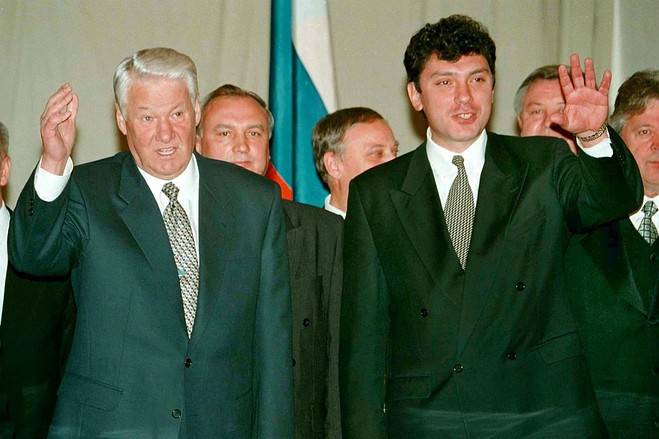 Mainstream media have presented Boris Nemtsov as an anti-Putin “liberal” oppositionist. In reality he was part of the oligarchy that began to emerge after the collapse of the Soviet Union, but had fallen out of grace with the main clique that took over. Here Artem Kirpichenok in St. Petersburg gives a very different point of view from within Russia.

After a twenty year delay Boris Nemtsov’s fate finally caught up with him. A gang of hit men, a cold body lying on the ground, a screaming mistress and investigators frantically working in the rain: in the “free” nineties this kind of scene was a common sight in most Russian cities.

Back then, the new so-called “democratic” elite was struggling for power, and to get their hands on other people’s property and well-paid positions. It did not do so through the denunciation of rivals to the NKVD, but by using bombs, sniper rifles and poison. Boris Nemtsov was able to avoid assassins’ bullets back then. It was only last night that he was gunned down by hit men, in year fifteen of Putin’s “stability”.

Undoubtedly, Boris Nemtsov was one of the symbols of the Yeltsin period. As a very young man he had an impressive career – from Boris Yeltsin’s advisor to Governor of the Nizhniy Novgorod region. In 1997 Nemtsov became Deputy Prime Minister. Using what modest forces and talents he possessed, he did all he could to build the “New Russia” that we know today out of the rubble of the USSR.

Sergei Borisov, researcher and author of an article titled “The current political regime in the Nizhniy Novgorod region: The making of the 1990s”, writes that an “informal alliance of the most influential, elite-generating corporations” had been forming around Nemtsov, made up the executive and legislative branches of government, local “siloviki” [representatives of police, state security and military forces], entrepreneurs and mass media owners.

In the opinion of sociologist Alexander Prudnikov, models of management and government promoted by Nemtsov represented a “technology of testing new elements of controlled democracy”. Subsequently this experience of the neoliberal “controlled democracy” was transferred from the Nizhniy Novgorod “test site” to Russia in its entirety.

Effectively, the foundations of the new Russian economy were being laid in Boris Nemtsov’s Nizhniy Novgorod. In those years, the press widely circulated reports about the governor’s relations with criminal boss Andrei Klimentyev; about the Bank of New York funds that mysteriously disappeared in Nizhniy Novgorod; and about Nemtsov’s long friendship with businessman and bureaucrat Boris Brevnov, who helped to destroy and sell off the Balakhninsk paper mill for a rock bottom price.

However, it must be noted that back then the “free” mass media were relatively unconcerned with such methods of business management. The “democratic public” insisted that “state property is nobody’s property”, and that theft was necessary for the primitive accumulation of capital and the achievement of the glorious market-oriented future. At that time, the “crooks and thieves” [a common derogatory name given to Putin and his party by the opposition] were very much in favour of their current critics.

Holding a portfolio in the Russian government was the highest point in Nemtsov’s career. Boris Yeltsin himself, either jokingly or while drunk, spoke of his intention to make his namesake, Boris the Second, an heir to his tsarist crown. But it was quickly discovered that the crown was a little bit too big for him.

Nemtsov’s brief but scandalous stay in the Kremlin was characterised by the embezzlement of public funds from the OAO Unified Energy System of Russia; dilettantism; and laughable initiatives like the attempt to make civil servants use only automobiles produced in Russia.

On 26 December 1997, the Duma issued a statement describing Nemtsov as an irresponsible and poorly qualified politician, and advised Yeltsin to relieve him of his position. The president himself also understood that Nemtsov was not able to spread the authoritarian model he had created in the Nizhniy Novgorod region to the rest of Russia. This had to be done by a completely different person, who appeared in the political arena soon thereafter.

In 1999 Nemtsov stated: “For right-wing forces Putin is a fully acceptable figure. He is a hard-working, experienced and intelligent person, approximately on the level of Stepashin”. The former Nizhniy Novgorod governor repeated similar sentiments later again and again, claiming that Vladimir Vladimirovich [Putin] was the “most worthy out of all presidential candidates”.

As we know today, Boris Yefimovich [Nemtsov] committed a fatal mistake back then. A barely competent politician on a regional scale, without any connection to Putin’s St. Petersburg clique, had turned out to be of no use to the new authorities. After the defeat of the “Union of Right Forces” [Nemtsov’s right-wing neoliberal party] in the 2003 Duma elections, Nemtsov found himself left outside the official political field and started to play a role as one of the leaders of extra-parliamentary opposition. Owing to his former governorship and position of deputy PM, he became “the first in the village” of the liberal opposition, and began to be presented as a distinguished “advocate of democracy” and “fighter against corruption”.

Clearly vatniks and Soviets [derogatory terms used by Russian liberals to describe ordinary working class people who look back to the social gains of the old “Soviet era”, and who reject liberal ideology and who may presently have some illusions in Putin] were in no position to appreciate Nemtsov’s style. They did not hide their hatred towards this Russian Rafferty. Actually, even many of his liberal associates believed that the former governor was not at all beneficial for the Russian “opposition”, but rather discredited it with his past exploits and his visits to strip clubs. But after Friday night this is all in the past.

In the 1990s millions of ordinary working Russians passionately wished for Nemtsov, Chubais and Gaidar to meet their bullet or their noose somewhere by the Lobnoye Mesto, next to the Kremlin Wall. In the case of Nemtso, this wish has only now been realised. But in this death there is neither justice nor redemption. On the contrary, even with his violent death Boris Yefimovich managed to cause great harm to the country he lived in. Nemtsov’s assassination will inevitably lead to serious negative consequences – a toughening of the Putin regime; an increase in activity by the liberal opposition, which now has its own Gongadze [Ukrainian journalist assassinated in 2000]; and a sharp deterioration of relations with the EU and the US.

And for all these “Games of Thrones” to which the prince of the Russian liberal elites - Boris the Second who never was - fell victim, it is the Russian workers who will be made to pay.