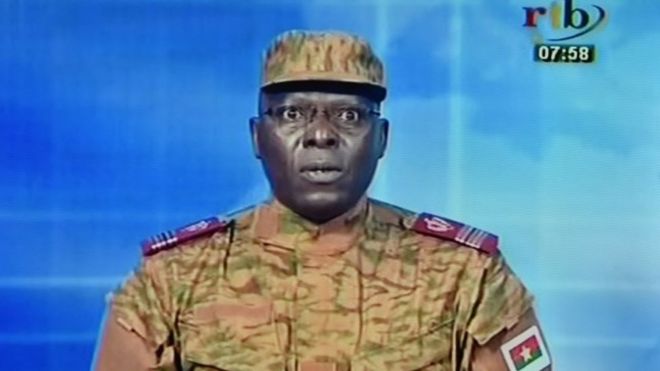 Burkina Faso’s Presidential Protection Regiment (RSP) has carried out an overnight coup in the capital Ouagadougou.

Reuters and Al Jazeera reports that yesterday afternoon, guards belonging to the RSP burst into a cabinet meeting and took the transitional president, Michel Kafando and his prime minister, Isaac Zida prisoner. This was later confirmed by the interim parliamentary speaker, Cheriff Sy. Other ministers taken hostage are the ministers of Public Works, the Minister of Labour and the Minister of Social Security. Later, the RSP soldiers fired shots when people started to protests in front of the presidential palace.

The coup was confirmed this morning by a spokesman of the RSP on radio and television., said the spokesman of the RSP. The processes which led up to the current events were fully explained in an article we published just a few days ago, Burkina Faso: Regime in crisis before the elections.

The main reason for the coup is that the the prime minister, Isaac Zida has been excluding the most reactionary section of the Compaoré-era loyalists from the process ahead of the 11 October elections. He has done this in order not to provoke a second mass uprising of the people who overthrew this section of the regime in October 2014. This was confirmed by the RSP spokesman: ‘’We have put in place a national democracy council tasked with organising democratic inclusive elections.’’

But the coup is precisely the most obvious provocation to the masses. Balai Citoyen, the group which led the uprising in October last year, has called for mass mobilisations. Together with this, the biggest union, the General Workers Union has called for a general strike. The speaker, Cheriff Sy has also called on the masses to fight against the coup. The next few hours and days will be critical. Already there are reports of clashes in Revolution Square. The key to the situation is the mobilisation of the workers and the revolutionary youth.