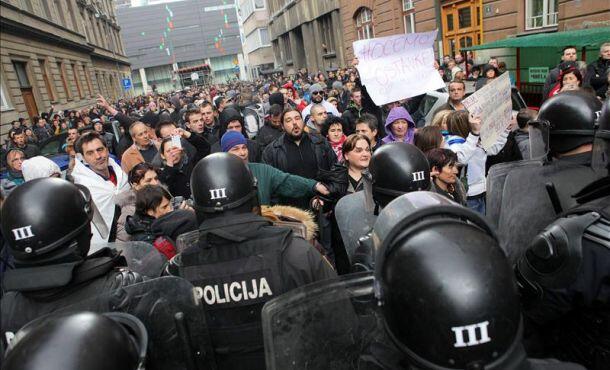 A few days ago, I was asked to write an article about the current situation in Bosnia and the prospects for a radical change in the socio-political situation there. However, given the new developments in Bosnia and its neighbouring countries, I could not avoid writing about the situation in the Balkans as a more or less unitary whole. Given the mythology about the Balkans as a region divided by primitive tribes and pre-modern barbarians that is perpetuated in the western media, it might seem absurd to talk about the Balkans in this way. Nonetheless, for centuries, the peoples of the peninsula have shared the same plight, as victims of European imperialism.

The situation in Greece - which has been on the verge of a revolution for more than five years - has opened the eyes of many people in the region to the role of the EU in this area, which has suffered for centuries. This has caused an increasing part of the population in the Balkans to resent the path of ‘EU integration’. Until now the anti-imperialist mood has mainly benefited right wing and ultra-nationalist populists who sprinkle their intentions with a bit of social demagogy. Nevertheless, it is evident that leftist ideas (however distorted they might be in the social demagogy of the right) and anti-imperialist attitudes have gained enormous strength in countries which have been devastated by privatization and the outright robbery of the working class through an unprecedented onslaught on employment, wages and social services.

The Explosion – The Facts 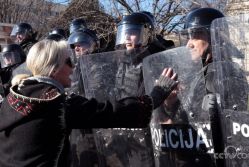 Two weeks ago in Tuzla (formerly a large industrial centre), the workers of a bankrupt factory joined forces with an organisation of young activists to carry out a protest of relatively minor proportions in the city centre. Unexpectedly, the demonstrators were joined by huge numbers of people sharing their grievances. Some of the messages that were conveyed that first day were: the demand for a revision of privatization throughout the country, an increase of the minimum wage and the prosecution of corrupt politicians. It was clear from that afternoon on that nothing would be the same in Bosnia. Within the next two days, most key government buildings were in flames and protesters had occupied government buildings in Tuzla, Sarajevo and Mostar. Other protests were carried out in a whole range of small towns. 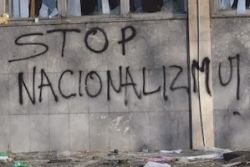 This relatively simple set of facts was interpreted in ways that fit virtually every position available on the political spectrum of the region. Of course, the trouble is that the principle of Occam's razor would rule out most of these so called analyses as pure nonsense. The most vocal groups were the chauvinist right wing demagogues who made up all sorts of conspiracy theories to make a protest - in which people carried red flags, shouted anti-nationalist slogans, and demanded ultra-leftist measures - seem as a part of a Bosniac nationalist agenda. This kind of rhetoric initially had a powerful impact on preventing the people of Republika Srpska (a federal entity inside Bosnia and Herzegovina) from joining forces with the Bosniac and Croat workers, by scaring them with the spectre of losing their autonomy. In Serbia this kind of rhetoric also had an effect because the right wing nationalism of the political and economic elite - who have ruled the country for two decades on the pretext of defending the interests of the entire nation - still manages to gain an echo.

The liberal and libertarian currents, of course, saw the protests as a message against the corrupt state bureaucracy, the massive public sector and the meddling of the state with the free market. But although there were some anti-government demands among the protesters, most of them were attacking the government for protecting the wealthy tycoons who emerged from the wars of the early 1990s.  With their obscene wealth, they bought factories for peanuts and then sold them to foreign investors for five to ten times the sum, thus multiplying their loot from the war. Of course, no liberal commentator tackled the question of the protesters’ demands for the revision of privatisation - and if they did, it was merely written off as a Utopian idea incapable of yielding any productive results.

And finally, we also find a lot of cynical talk from former radical leftists and some nationalists about the futility of these protests. In Serbia, for instance many people simply lost faith in any progressive developments. After 25 years with one tragedy after another it is not a surprise. First the so-called communist regimes collapsed, then we had ten years of nominally socialist, but in fact brutally reactionary, regimes, then a seemingly progressive rebellion happened in 2000, but as it was later confirmed, the movement was hijacked by the CIA-financed leaders. This has led many on the left to believe that every movement, in what has been called a “post-ideological” era, is either impotent or corrupt.

But as we can see from the logic of events, the best way to explain this situation is to assume that the working class is a coherent social and political force, ready to defend or fight for its interests. However, political analysts are rarely ready to accept this and thus the most plausible explanation for these events was brushed aside.

The Return of the Repressed

A reality that is rejected, falsified, obscured and violated has a tendency to assert itself in a sudden explosive shift. The leftist, proletarian character of the protests in Bosnia asserted itself over and over again. Whether we take the explicit statements of the participants and slogans they carried or the public addresses of some of the more prominent protesters, it was clear that these protests were pronouncedly concerned with the well-being of the working class. However, the most important fact that will certainly impact the future of workers’ organizations and possibly even future forms of government was the institution of the Plenum that emerged as a tool of the movement for articulating demands. 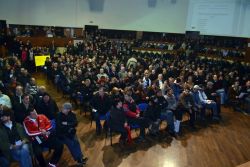 Plenum in SarajevoThe first Plenum was organized in Tuzla with the objective of offering an opportunity for everyone to express their grievances about the current situation and to propose solutions. These ideas were then voted on to be listed as the official demands of the movement. This institution of direct democracy, despite its success, was immediately dismissed by media commentators as ridiculously Utopian. They also ridiculed the organisers as a bunch of hotheads playing communist games. When the first attempt at organising a Plenum in Sarajevo failed, these commentators where gloating about their ‘predictions’ being confirmed. However, they found themselves speechless when Plenums started taking place in Mostar and other cities as well. Moreover, the Plenum in Tuzla was extremely efficient. From about a hundred people at the outset, the Plenum attendance grew to more than a thousand in a meeting a few days ago. At the same time discipline was tight and there were no interruptions to the procedures of the Plenum. It is also important to mention that in order to support the Plenum meetings and to show that the movement had not receded, a large number of people were protesting in the streets during the Plenum meetings.

The events in Bosnia and Herzegovina have taught us many things. Firstly the balance of power in the advantage of the working class over the established institutions is indisputable. After two days of fighting in the streets the police simply laid their weapons aside and joined the protesters. In response, the trade union of Serbian policemen issued a statement that the Serbian police will refuse to fight the protesters if the movement spills over to Serbia. Secondly, from a theoretical point of view, the events of Bosnia showed that direct democracy is far from being a Utopian concept. With the development of communication technology the potential for wide coordinated decision making can easily be implemented. Thus people can express their opinion and vote on every important political decision. In this respect, the left can learn a lot from the working men and women of Bosnia. 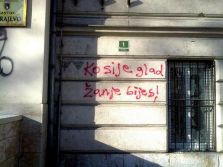 Grafitti on Sarajevo government building: 'He who sows hunger reaps anger'In the beginning of the article, I stated that what is happening in Bosnia cannot be limited to that country alone, even though most right wing commentators would like us to believe that. The reality is quite the opposite. One only needs to open any regional newspaper, and the fact that revolutionary upheavals are on the agenda all over the Balkans will immediately become clear.

Despite the total lack of media coverage, the students of Pristina (the capital of Kosovo) are engaged in violent clashes with the police over corruption at the university, rising tuition fees and the lack of jobs. Just a few days ago, the workers of one factory in the Serbian town of Leskovac - once known as “little Manchester” for its highly developed textile industry - occupied a factory refusing to leave until their demands are met. There is also a factory occupation in Užice, the cradle of 20th century Serbian Marxism, and the first revolutionary territory to free itself in Nazi occupied Europe.

While this article was in the process of editing, the news broke out that there is a massive rebellion on its way in Skopje, FYR Macedonia. The movement expressed strong sympathy with the working men and women from Bosnia.

In Serbia elections are on the official political agenda, but it seems that people have very little interest in it as the winner is already known. Sadly, so are the losers who will be the mass of the population regardless of who wins. This is a reflection of the political crisis of the country which will lead to an explosive future. Then there is of course Greece, which is in the state of permanent crisis, and as the title of the recent documentary advertised by the IMT states – it is “On the Brink”.

In Slovenia, which is technically not a part of the Balkans, but historically and culturally it is closely related to the region, the Left is beginning to emerge as a major political force by addressing the grievances of dispossessed workers.

There is no unified explanation for all of these events apart from the intensification of class struggle. A response of the oppressed working class awakening from its decades-long slumber and drunkenness on national myths and retrogressive ideology. No matter what happens to the movement in Bosnia it has once again displayed the power of the working class and offered us a glimpse into the future. If the currently existing movements in the Balkans fail to materialise in any sort of a meaningful social transformation, the continuation of neo-liberal assault against the population and the implementation of austerity will inevitable only lead to more and bigger revolutionary explosions in the future.