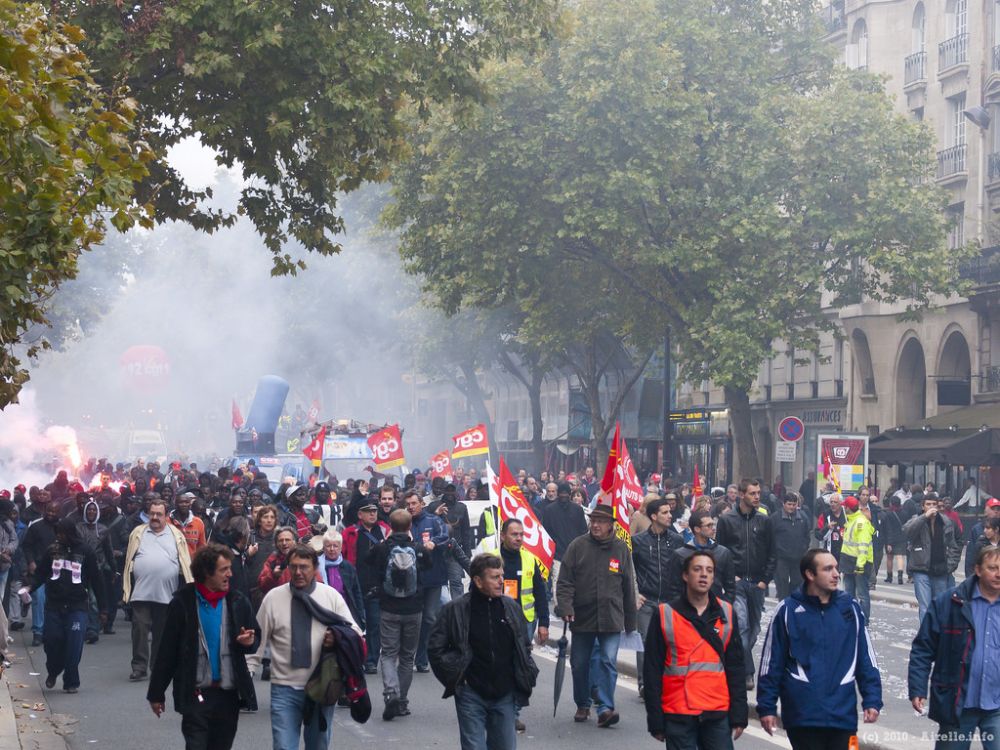 France has entered into a new phase of struggle as President Emmanuel Macron approaches a major showdown with public sector workers. The country is convulsed by a series of strikes, demonstrations and confrontations between the masses and the state authorities.

A one-day strike on 22 March brought 500,000 demonstrators onto the streets. Meanwhile, students resisting attacks on higher education have been assaulted by far-right thugs on their campuses, aided and abetted by university management. With the spectre of May ’68 hovering over events, the French ruling class is determined to crush the workers and youth and impose its reactionary, pro-capitalist agenda at any cost.

Despite massive protests, Macron successfully pushed through a sweeping overhaul of labour laws in the Autumn of 2017. These counter-reforms go far further than even François Hollande’s hated ‘El Khomri Law’ in undermining the unions and placing more power in the bosses’ hands. The new arrangement strips the major trade union federations of a lot of their negotiating power, makes it far easier for employers to hire and fire workers, and reduces compensation for wrongfully dismissed employees.

The changes aim to promote greater ‘flexibility’, helping the French capitalists better compete in the European marketplace by shedding irksome worker protections and shrinking the state, opening up more breathing space for private sector investments. Macron also seeks to tackle France’s 9.7 percent total unemployment rate (against an 8.7 Eurozone average) and 22 percent youth unemployment. Thus, in addition to savaging employee protections, he has declared war on out-of-work citizens (whom he characterised as “slackers”), by slashing benefits by 50 percent (up from 20 percent) after a two-to-six-month period of unemployment. 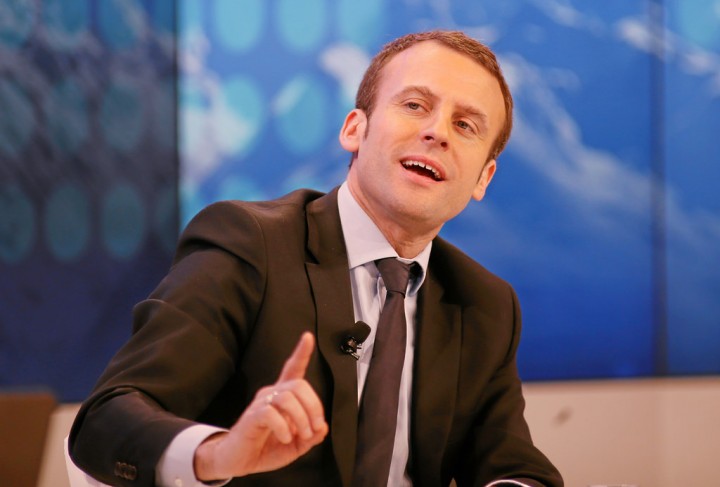 Macron has also promised to cut the number of public workers in France (of which there are 5.4m) by 120,000 over five years, reducing costs by relying more on private contractors, introducing merit-based pay and exacting voluntary redundancies. This is despite a campaign pledge for better recognition and remuneration for public sector staff. As a major step towards its ambitious target, the Macron government plans to privatise SNCF – France’s state-owned railway company – and scrap the job-for-life guarantees enjoyed by workers since the nationalisation of French railways in the 1930s.

Macron’s programme of cuts and counter-reforms has been met with delight by capitalist commentators, who have long criticised France’s ‘rigid’ employment laws and extensive state infrastructure as being behind the times. In 2017, the Financial Times’ “Eurozone analysts" concluded that Macron’s attempts to revamp France’s labour market will spur economic growth and boost confidence” in Europe. His promise to make France a ‘start-up nation’ (Silicon Valley newspeak for a playground for short-term investment by two-bit private companies) has drawn compliments from tech billionaires like Xavier Niel, who said the president "has given France a pro-startup, pro-entrepreneur image abroad that we did not really have before."

Macron has also been busy in Brussels, working on a new treaty with German Chancellor Angela Merkel to reform the Eurozone on the basis of their “shared values”; which include slashing state budgets through austerity, privatisation and deregulation of the labour market.

Taking on the rail workers 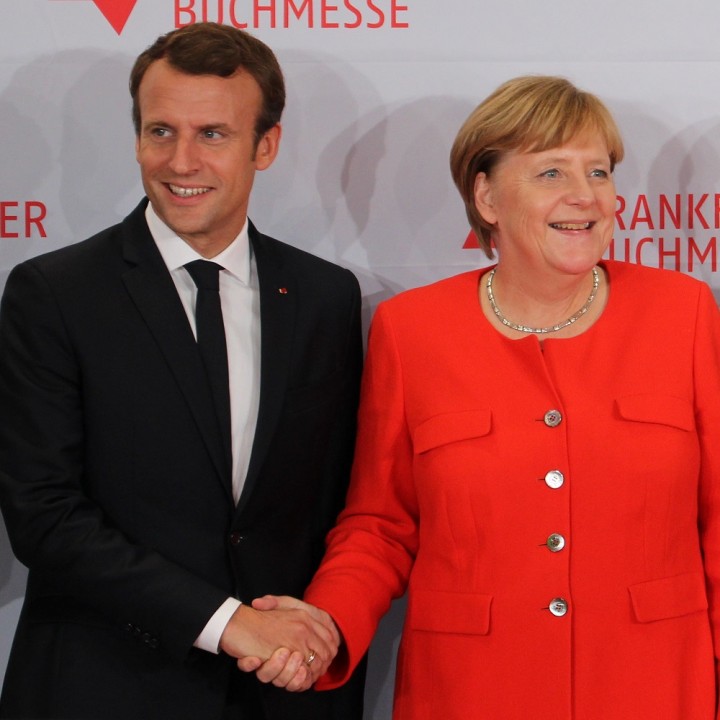 Macron and Angela Merkel aim to reform the Eurozone according to their "shared values" / Image: Frankfurter Buchmesse

The president’s latest move has provoked a militant response from public sector workers. Most significantly, rail workers have pledged to strike from 3 April onwards over the plan to privatise SNCF. As our comrades at Révolution explained in their recent editorial, taking on the rail workers is a dangerous gambit for Macron. They are one of the strongest layers of the working class, with power at their fingertips to bring France grinding to a standstill. These workers have also tended to lead other sectors of the working class in struggle, such as during a major strike wave in December 1995.

However, Macron hopes to defeat the workers’ best line of defence and thus demoralise the entire class. This would make it much easier to continue his draconian programme of ‘reforms’. Conversely, should the rail workers succeed in their strike, it would encourage and embolden the rest of the working class and put the government on the backfoot. This was confirmed by veteran political commentator, Alain Duhamel last week, who said: "If Emmanuel Macron gives ground on such a symbolic reform and so close to his election (last May) his image of a reformer will be destroyed."

The SNCF strike therefore represents a focal point in the wider class struggle. It is unlikely Macron will back down easily, for fear of the rail workers’ militancy spreading to other parts of the economy. It was precisely the fear of such a development that forced the Juppé government to retreat in 1995. 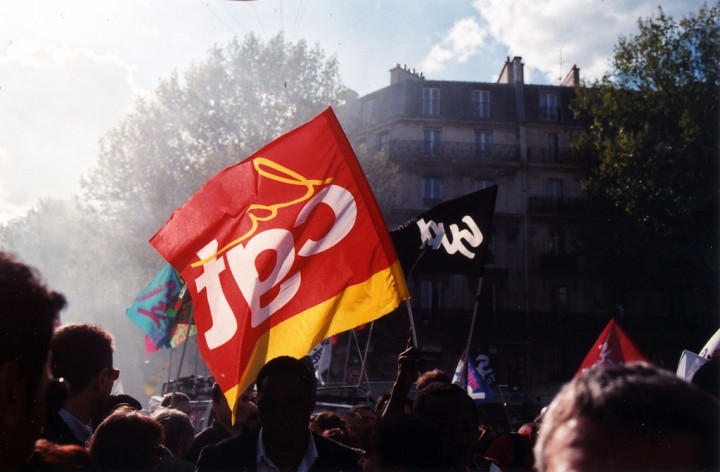 The union leaders have of course been dragged along by their membership at every stage. Only the SUD Rail trade union has called for indefinite strike action: specifically, a one-day general strike, renewable every day in the General Assembly. CGT, CFDT and UNSA are instead calling for a ‘slowdown’, consisting of two days of strike action, three days of work and so on, from 3 April to 28 June. Rather than supporting their brothers and sisters in the transport sector by coordinating strike action for 3 April, other public-sector trade union leaders are simply calling for a “day of action” on 19 April – more than a fortnight after the commencement of the rail strike, and during the school holidays! This is a rehash of the terrible strategy applied during the fight against attacks on labour laws in 2016 and 2017.

Despite the best efforts of the union tops, anger from the working class has erupted into the open – creating a highly volatile situation. On 22 March, 500,000 protesters took to the streets of France, led by train drivers, teachers, nurses and air traffic controllers from seven public sector unions. The protest resulted in hundreds of flight and train cancellations (including Eurostar), as well as the closure of many schools and nurseries. Commuter trains RER and Transilien commuter trains were also severely disrupted.

The official national turnout was smaller than previous demonstrations  against Macron's labour reforms and the anti-El Khomri protests that took place under Hollande. However, the mood was more militant than in Autumn 2017, and there were many clashes between demonstrators and the police. Moreover, there were 65,000 protesters in Paris alone, compared to a height of 60,000 last year. 35 percent of striking public-sector workers from various industries took part in the demonstrations.

Additionally, the police presence was nearly doubled from a peak of 26,000 in 2017 to 49,000 – which reveals the anxiety of the ruling class, and their determination to crush the movement. There were many physical confrontations, and the police turned water cannon against enraged crowds near the Bastille:

The heavy-handed tactics failed to dampen the enormous anger and radicalism of the masses. Baptiste Colin, a 22-year-old engineering student, accused the government of wanting to "destroy public services". This sentiment was echoed by Marine Bruneau, a municipal worker: "They seem to consider that in France... the private sector can do everything and that we don't need public servants like me. But France needs us. If we're not here, the country is not ok." François Rauch, 65, a former SNCF rail operator, told Reuters: “We’re here against the government, which is only helping the rich.”

The demonstrators further revealed their political stripes when they booed the new leader of the Socialist Party, Jean-Christophe Cambadélis, who spoke at the protest in Paris. By contrast, an appearance by Jean-Luc Mélenchon was met with enthusiastic cheering and applause.

The youth have also begun to mobilise against Macron’s attempted counter-reforms to the education sector, including tightened entrance requirements to French universities. At present, every student in France who passes the baccalaureate high-school exam has the right to go to university in their home area. This has led to oversubscription to popular courses like Law and Psychology, meaning a (very unpopular) lottery system is used to determine admissions where demand is highest. Under Macron’s plans, the most-oversubscribed universities would be allowed to select students on academic performance, which is of course heavily influenced by one's upbringing and social class. The proposal will end France’s tradition of universal university education. Aside from this, a series of local measures have been enacted to privatise and marketize higher education, thus cutting costs. 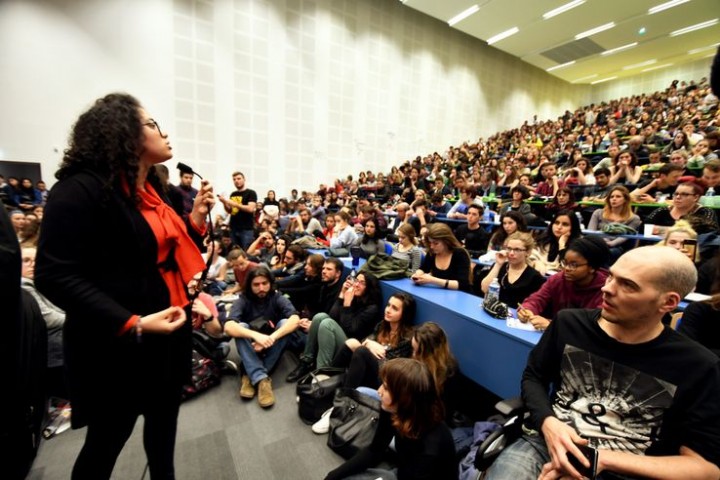 Students at the University of Toulouse le Mirail have been in occupation for three months / Image: France Culture

Many students have staged sit-ins in protest at these measures, facing severe repression from the police and university administration as a result. Students at the University of Toulouse le Mirail have been mobilised for three months, occupying the building and blocking the entrances in protest at Macron’s new admission system and an attempt to fuse the institution with a neighbouring university. Staff are on strike for a renewable, three-month period. Education Minister Jean-Michel Blanquer, declared the university “ungovernable”, and intervened by dismissing the local administration and placing Toulouse le Mirail under government control via a state-appointed minister, Richard Laganier. The state has also threatened police action if the occupation continues. Nevertheless, students and staff vowed to press on at a general assembly on 13 March, stating that while the “initial demand of the movement was purely local” their objectives are now for broader, “social” change – citing the legacy of May ’68.

Another incident reveals the appalling tactics employed by university administration to shut down student dissent. A group of students occupying a lecture hall in Montpellier University were attacked by a far-right militia, armed with bats, sticks and stun-guns, who screamed vile, racist abuse as they beat the occupiers and forced them out of the room. The university’s dean, Philippe Pétel, allowed these thugs into the lecture theatre via a back entrance. Four of the victims ended up in hospital.

According to witnesses, the militia was made up in part by students and teachers from the university. The occupiers recognised two members of the Montpellier law faculty amongst the mob, and the dean (who has now resigned) apparently confirmed that some of the assailants were students:

Once the students were cleared out, the gang locked itself inside the room with members of the university administration. When the police arrived, students were told that the officers could not enter the lecture theatre to arrest the assailants “because they did not have the permission of the dean.” The entire, shocking episode was captured on video:

After the occupiers were expelled, around 200 protesters filled the streets outside the university and clashed with 30 far-right demonstrators from the Ligue de Midi, wearing red, white and blue masks. It is very likely that this attack and fascist demonstration were orchestrated, or at least abetted, by the university bosses, who leaned on repulsive, reactionary elements in their own faculties and student bodies, bolstered by far-right groups from outside, to crush student dissent. Students across France have now called for a national day of protest tomorrow (29 March) in solidarity with the victims of the attack at Montpellier, in addition to resisting Macron’s education policies.

The Times reports ministers fear this incident could turn from a “low-key protest” into “a 1968 student revolt”. Of course, the French trade union leadership has a long history of calling actions, and allowing them to exhaust themselves without achieving anything. However, the real cause for concern from Macron’s point of view is the strengthening bonds of solidarity between workers and youth. Students have already called for participation in the action commencing on April 3, without questioning the unions’ strategy. 50 years ago, it was the solidarity and militant action of students and the organised working class that brought the De Gaulle government to its knees. If Macron and his capitalist cronies continue their assault against students and youth, they could reanimate the memory of that revolutionary chapter in French history.