The Second Latin American Meeting of Worker-Recovered Factories took place on June 25-27. Over two hundred workers gathered at the National Library in Caracas to discuss perspectives for the occupied factories movement internationally. Worker representatives were present from all over the world, including Paraguay, Bolivia, Mexico, Argentina, Brazil, Venezuela, Turkey, Iraq and Canada. 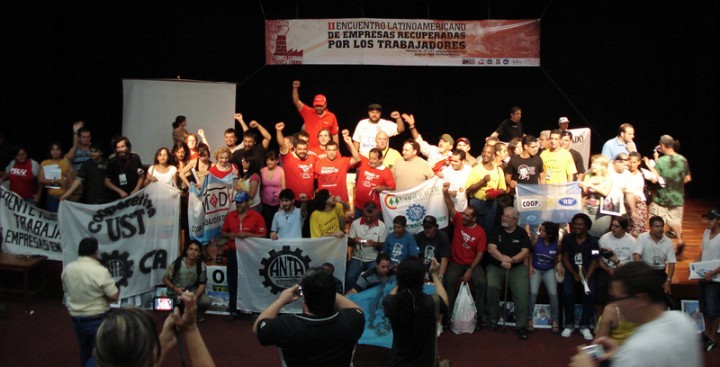 Leading activists from Mitsubishi, Vivex, Inveval, the newly nationalized La Gaviota, the Cabelum factory in Guayana, the Front of Health sector workers' of Lara, the trade-union in CEMEX and many more unions and occupied factories were present. A number of leading Bolivian trade-unionists of the COB (Central Workers' Federation), the Central Obrera Departamental de Oruro and of the FSTMB (Miners Trade-Union Federation) unfortunately had to send apologies for various reasons.

At 2:00 p.m. on June 25 the opening meeting officially began. After a few remarks, Serge Goulart (the national coordinator of the Occupied Factories Movement in Brazil) introduced the first speaker. Eduardo Samán, the Venezuelan Minster of Commerce, spoke at length about the need to deepen the revolution in Venezuela. World capitalism is in crisis, he said, and “we can’t expect that it will collapse on its own.” To this end he called on working people to organise to defend and deepen the revolution in Venezuela. He ended his talk by reaffirming the importance of the meeting in building a collective memory of workers’ shared experience. The minister was presented with several gifts, including The Battle of Inveval: The Struggle for Workers’ Control in Venezuela by Pablo Cormenzana, a militant of the IMT in Venezuela. César Gonzáles, coordinator of the worker-recovered factories in Paraguay, also presented the minister with a film about Cerámica Itauguá – a ceramics plant in Paraguay occupied by its workers. 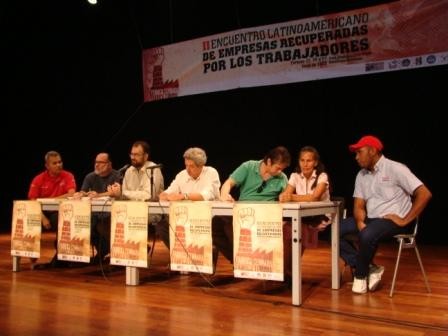 Lalo Paret of the National Movement of Occupied Factories in Argentina also spoke at the meeting. He discussed the importance of distinguishing between workers’ cooperatives and the nationalisation of factories under workers’ control. Cooperatives do not address the problem of capitalism. If workers run a business under the cooperative model they will be forced to adhere to the competitive logic of capitalism. Nationalisation under workers’ control, on the other hand, ensures that workers’ interests are not subjected to the dictates of the market. Instead of the factory belonging only to the workers who work there, it belongs to all workers – to society as a whole. This was an important lesson learned from the Argentinean experience.

Luis Primo from FRETECO spoke next. He is also an organising member of both the First and Second Latin American Meetings of Worker-Recovered Factories and is a well-known unionist in the UNT. He emphasised that one of the major problems facing the working class in Venezuela and abroad is how to transform capitalist management into working-class management. So far workers have learned about workers’ control; now they have to learn about workers’ management. Workers also have to learn know to “articulate the national with the international,” he said.

A representative from La Gaviota, a recently expropriated sardine plant, also spoke at the meeting. Pascuala talked about the difficulties she and her co-workers faced when they decided to occupy their factory. At first it was difficult because they lacked raw materials. Many workers became discouraged and didn’t think they could do it. Eventually the materials came through and confirmed to them that workers “can do it, united and together.” They discovered that they can continue production under workers’ control. “We can do it without the bosses” she said. Workers now decide how much is produced and where it is sent. “Now we do everything – and we get to eat the sardines!” 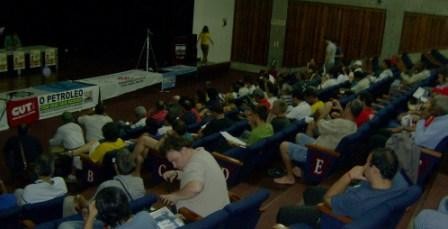 Félix Martínez, the general secretary of the Union of the New Generation of Mitsubishi Workers (SINGETRAM) spoke next about the police brutality that ended in the death of two comrades. “Before Chavez,” he said, “unions had [absolutely] no support.” Activists were beaten up or killed regularly. Chavez has been able to provide some support to struggling workers in Venezuela. Since the death of the two Mitsubishi workers, however, the economic fight has been transformed into a political one; and this requires ideological vigilance. “Now that we have met the IMT”, he said, “we have learned to be vigilant about ideology. We are going to make a school for workers.”

He also talked about the importance of the exchange of ideas between workers of different countries in the fight for socialism. We need unions with more democracy and leaders who will fight for workers to ensure that the needs of the group are met. Most importantly, he insisted, the means of production need to be transferred to the workers. “We are part of the development towards worldwide socialism. I am completely convinced that this is the only way forward – collectively. Our solidarity is permanent.”

After Félix spoke a moment of silence was observed for the two fallen workers at Mitsubishi, and for all workers who have been persecuted or killed.

The last speaker of the day was Jorge Paredes, the president of the union at Inveval. Miembro del consejo de fábrica de Inveval y trabajadores Presidente de Inveval. He spoke about the importance of eliminating private property and of combating bureaucracy and the state. He also discussed how the umbrella organisation, FRETECO, will be an important factor in organising these fights.

On the second day reports were given on the state of workers’ movements in various countries. Representatives from Iraq, Canada, Turkey and Paraguay reported on the situation in their respective countries.

Following the international reports, Pablo Cormenzana, the author of The Battle of Inveval, spoke about the Venezuelan revolution and the struggle of occupied factories. Pablo stressed that the central point for the workers’ revolution in Venezuela is the occupied factories movement. But unfortunately workers in Venezuela cannot count on the state to fight in their interests. There are elements within the government that represent the interests of the bourgeoisie, and the case of Inveval reveals this clearly. “It is a microcosm of the class struggle,” he said. It has been nationalized for four years but it is not producing at full-scale, only repairing valves because of sabotage on the part of the bureaucracy. In spite of the fact that Chávez has hailed Inveval as an example to follow, signed the decree for its budget and also for the expropriation of Acerven (the sister-factory – a smelter which is vital for production in Inveval), none of this has been carried out and the bureaucracy is deliberately sabotaging Inveval. This highlights the need for stepping up an international solidarity campaign.

Likewise in Venezuelan society workers’ needs are not being met. The bureaucracy still poses a great threat and barrier to the revolution. Yet with the economic crisis the situation is getting more and more dangerous; and this is bringing the question of leadership to the fore. The working class needs to finish the revolution – it needs to take power. This is why organising the factory councils on a national level is so important.

The second day ended with a debate on private property versus social property. The debate was lively with many interventions from the floor. Luis Primo chaired the discussion. Gerardo Xicotencatl, trade-union leader at Olympia – an occupied factory in Mexico and the centre of one of the key struggles in that country – spoke on the political and social situation in Mexico in general and the concrete struggle at Olympia in particular.

On the third day there was a discussion on the repression of workers in all countries. Workers spoke about their experiences in Argentina, Brazil and Venezuela. Josie from Brazil described the plight of students in her country as well. In the end it was proposed that an international tribunal be created on the question of the criminalization of social movements and the repression of workers around the world. This was accepted unanimously.

A special resolution of solidarity with the masses of Iran was also discussed and voted unanimously. This resolution condemns the reactionary Islamic regime and hails the revolutionary movement that has taken to the streets in spite of harsh repression. This shows that the workers of Latin America are following events in Iran and are in complete solidarity with their fighting class brothers and sisters in Iran.

Another resolution, demanding that president Lula of Brazil give back Cipla and Interfibra to the workers, was also passed.

A final declaration of the meeting will be available shortly, including an addendum with international greetings from the meeting to various countries.

The balance-sheet of this meeting is overwhelmingly positive. It was a continuation of the first meeting which was celebrated in October 2005. But this time, the political situation on a world scale places it on a qualitatively higher level. On the one hand because the workers felt that they themselves had organized and financed this gathering. On the other hand because the economic crisis of capitalism is pushing new layers into struggle and these struggles are becoming increasingly militant in nature. Thus, it is necessary to link them together and build unity among workers, also on an international level.

The last decision of the meeting was that the third gathering should be held in Buenos Aires, Argentina, and to have an international character, not just involving Latin American countries, but also Europe, The Middle East, Asia and Africa.

Report of the first Latin American meeting of occupied factories.