United States
Share
Tweet
Last weeks' rallies in New York against the proposed bail-out of failed banks revealed a very angry mood. Comrades of the Workers' International League were on the rallies and they provide here an interesting insight into the real mood that is developing among US workers as capitalism plummets into crisis. 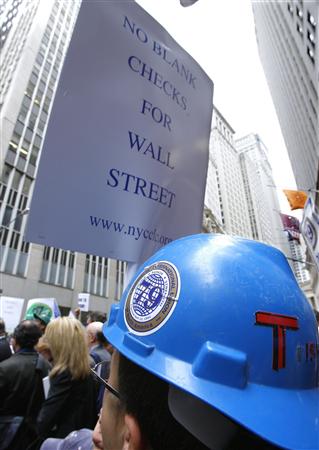 On Thursday, the AFL-CIO organized a rally against the bail-out plan on Wall Street at 12 noon. It seems like the leadership called it for this time because they didn't want it to coincide with a similar rally that was being planned by several left groups which was to take place at 4 pm, in order to keep the trade unionists separate from the "radicals." At the union-organized demo there were some 1,000 people present. Because of the bad time of day, the general make up of the crowd was union staffers along with some construction workers (who were almost certainly asked by the leadership to sacrifice their lunch break to show up). WIL comrades handed out several dozen "Capitalism Has Failed!" leaflets and sold 10 copies of Socialist Appeal.

Between rallies, the comrades made more copies of the leaflet and organized to get a bull horn. At around 3 o'clock, the comrades went to the location (the large bull statue a few blocks down from Wall Street) to hand out flyers. There is always a big crowd of tourists around the bull. But within an hour, that crowd of tourists was transformed into 100s of people against the bail-out plan. Many people were coming up to the comrades to get copies of the leaflet. Much of the crowd was made up of people who joined right off of the street. Many of the non-organized left were very receptive to the flyer. In response to the headline "Capitalism has failed" there was a lot of comments to the effect of "thats right!"

Soon, a big chunk of the crowd went to the Stock Exchange, where there must have already been another spontaneous rally against the bail-out taking place, as this crowd was more like a couple of thousand strong. It was impressive to see the stock exchange covered with people who were chanting things like "You Broke it! You Buy it!" and "Bail out is Bullsh*t!" and people with signs that read "Jump! You Fu*kers!" (a blunt message to the big bankers in their offices up above).

You could clearly see the generally working class make up of the crowd. Of course there were the "usual suspect" activists, but the bulk of the crowd was right off the street having just gotten off of work. The comrades had to go make even more leaflets as they had again run out.

Once again, the crowd moved to spontaneously march through downtown. I think it is important to point out that there were no problems with the police and that they were actually quite helpful in "clearing the way" for the march. Due to the size of the NYPD and the relative ease it is to become a cop in New York, many average cops seem to be more sympathetic towards these types of things. The march went on for about an hour and a half all throughout downtown. Unfortunately, the march ended up in the dead end of Battery Park, which despite the name, led to the march losing much of its energy and fizzling away. This may have been done intentionally by the police. It is noteworthy that the march ended in a location that was a significant landmark for the American Revolution. Battery Park was where the last evacuation of British troops took place, thus marking the end of the American Revolutionary War.

Where one revolution ends, another begins. You could clearly see that the recent events surrounding the economic crisis had driven many people to more clearly understand the class divisions in society. It has also shaken many people's faith in the capitalist system itself. The spontaneous mobilization of so many people was impressive. The spontaniety made me think of the world events in 1968. And although this was by no means on par with the events of 1968, it is a clear reflection of the historical period we are entering.

The comrades who participated could feel an increased sense of urgency. Without a doubt we must work even harder to build up the forces of revolutionary Marxism - the forces of the Workers International League - in order to intervene in a decisive way in the historic events to come. Join the WIL in the struggle for a better world!  Together we can play a leading role in the socialist transformation of the USA and internationally!