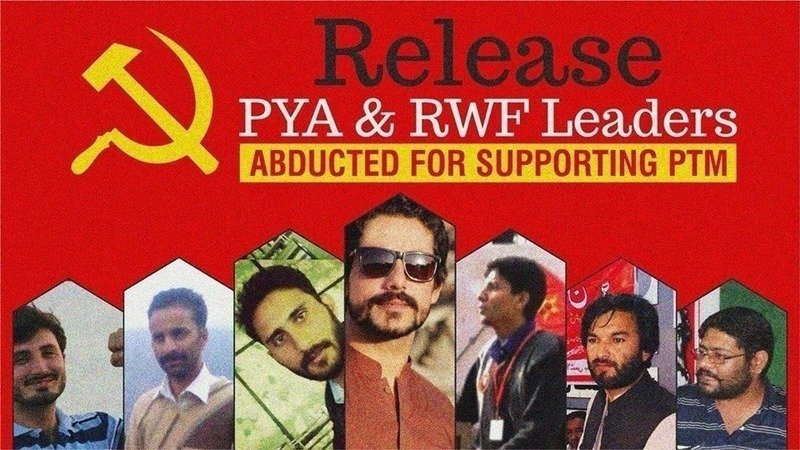 A number of prominent youth and trade union activists have been disappeared in Karachi by the Army and Sindh Rangers, a paramilitary state department notorious for extra-judicial killings. No case has been registered against them. Those remaining in custody are being held at the Rangers' headquarters in Karachi.

These activists, all of them members of Lal Salaam (International Marxist Tendency) were arrested because they joined the solidarity protest of Pashtun Tahafuz (Protection) Movement (PTM) in front of the Karachi Press club. The Pashtun movement has developed to massive proportions, and has seriously rattled the ruling class, which is why they are now cracking down on radical elements, whom they fear will gain an echo within the movement.

The protest was organized and called by the leadership of the PTM as they were being denied the right to hold a peaceful public meeting in Lahore.

We therefore demand the immediate release of these activists of the IMT abducted by the Rangers. Their only crime is to have expressed their views about the Pakistani State and supported the PTM in front of the Karachi Press Club . We also demand that the demands of the PTM should be accepted immediately and state should end its atrocities in the tribal areas and stop supporting Islamic fundamentalism.

1) Analysis of the Pashtun movement and reports on abductions

For more information about the Pashtun movement, read Adam Pal’s analysis of the PTM, which has mobilized hundreds-of-thousands of people across the country. It has given voice to some of the most oppressed layers of Pakistan, and has brought tens-of-thousands to public meetings. The state apparatus and the entire ruling class are trembling at the sight of this huge movement, which explains their severe measures against it. The international mass media is also taking notice of the Pashtun movement: the PTM has also received international coverage from the BBC, Reuters and Al Jazeera.

We published this report on 22 April after six of our leading youth and trade union organisers were apparently abducted by the army, and a further update on 23 April after another of our youth comrades disappeared. We believe these comrades were targeted and disappeared as a result of their participation in the Pashtun movement. Our comrades’ arrest was also covered by the Daily Times, The Nation and Dawn: all national, Pakistani newspapers.

Please sign this petition calling for the comrades’ immediate release.

Securing freedom for our abducted comrades might require expensive legal proceedings. Please donate to the Pakistan Trade Union Solidarity campaign to assist the comrades in Pakistan with court fees and legal representation.

4) International day of action on 25 April

We are calling on our comrades and supporters to hold an international day of action on Wednesday 25 April, and protest Pakistani embassies all over the world. See reports of these events here and here.

5) Model letter – send to Pakistani PM, Minister of the Interior and your local embassy

We call on all our readers and sympathisers to send the following letter to the Pakistani Prime Minister and Minister of the Interior (contact details below). This should also be sent to the Pakistani embassy in your home country.

For further information and to send solidarity messages to the families of the abducted persons, please email contact@pakistansolidarity.org

To whom it may concern,

We are deeply concerned about the disappearance of youth and labour activists, in Karachi on Saturday, after they attended a peaceful protest in support of the Pashtun movement.

They are presumed to have been arrested by the Army and Sindh Rangers, a paramilitary state department notorious for extra-judicial killings and we fear for their safety.

Furthermore, we view the disappearances as a very serious attack on the labor and democratic rights of Pakistani working people.

We ask you to investigate this incident and assure us that these activists are safe and well. We also ask you to inform us as to where they are being held and ensure their immediate release, as they have not participated in any form of illegal actions.

Those remaining in custody are:

6) Pass this motion at trade union branches and student groups

The following model motion should be raised at all trade union branches and congresses; as well as student unions and groups.

Condemn the abduction of unionists and student leaders by Pakistani state

For many years, the workers and youth of the Pashtun region have been brutalised in the name of ‘security’. The people living in the Pashtun regions face threats to their lives from army, military drones and Islamist fundamentalists. Earlier this year, the Pashtun Tahafuz Movement (PTM) started when a Pashtun youth, Naqeeb Ullah Mehsud, was killed in Karachi by a notorious police officer, Rao Anwar on 13 January 2018. Naqeeb Ullah Mehsud belonged to the Mehsud tribe of North Waziristan and was a shopkeeper in Karachi when he was abducted and killed under mysterious circumstances. Rao Anwar is famous for land grabbing and the use of extortion and murder to settle personal disputes. According to reports he has killed at least 400 people between 2011 and 2018 but not a single enquiry has been made against him. A student, Mashaal Khan, was also killed by mob lynching by state sponsored Islamic fundamentalists in Pashtun area when he initiated a campaign against high fees, high rents and the vice chancellor’s corruption.

All of the PTM rallies so far have been completely peaceful, with speakers showing their grievances and asking for justice through legal channels. However, state institutions and the secret services are targeting people, including students and workers, who have shown solidarity with the PTM. Against this backdrop, a rally was held in Karachi on 22 April 2018. Different trade unionists and youth leaders made speeches during the rally. When these workers were returning to their homes, state security agencies and Army intercepted their trains and buses, and without showing any warrants or arrest orders, took them to unknown locations. Nobody has been informed about the abductees’ whereabouts so far and no case has been registered against them. This is the usual practice of the police and army in Pakistan. The PTM expresses a huge movement of the masses, which has erupted in Pakistan against these injustices.

This union believes that the people of Pakistan, and especially the Pashtun people, have the full right to express their concerns through free speech, to hold rallies and express their grievances throughout the country in a peaceful manner. Illegal abduction of students by the state authorities should be stopped immediately. The students and workers of [your country] would like to see Pakistan free from Islamist fundamentalism, worker exploitation and oppression for minorities.