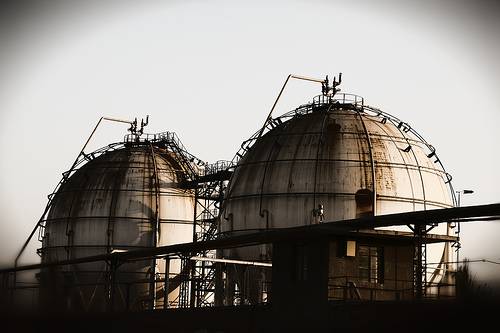 Billion dollar refineries are closed in one part of the world, while others open elsewhere. This is the craziness of the global capitalist economy. It wastes huge amounts of material and human resources, whereas these same resources could be used in a global plan to develop the economy in way more in line with the interests of all the people of the world.

Refinery workers in France are quite right to fight against looming plant closures. While from a short-sighted profit point of view up to 100 refineries will have to close in the coming decade, mainly in Europe and the US, it makes absolute sense to keep them open from a social point of view. Trade unionists around the world have to raise the debate to this level.

Following the crisis of the 1970s, hundreds of plants were closed down during the 1980s. This represented a colossal waste in labour power and other resources as in later upswings new refineries had to be built again.

Today a similar wave of shutdowns is under way. Due to a combination of different factors, the cuts will be particularly severe. Even before the current economic crisis, demand in Europe, the US and Japan had begun to decline. Heating oil for instance has been increasingly replaced by natural gas in Europe. The use of fuel oil in power generation has been in decline too. Furthermore, cars have become more energy efficient. All this has been pressuring demand for refinery fuels.

In addition to these factors, the introduction of mandatory blending of so-called bio-fuels (fuels made from the seeds and fruits of plants) in the US and the EU has aggravated the trend. This crazy policy has nothing to do with environmental concerns. Sensing that their grip over the ex-colonial, oil producing world is slipping, imperialist countries have been trying to create an oil industry at home.

This has created all sorts of environmental problems and bio-fuel production has crowded out food production, contributing to the price spikes in basic foodstuff in recent years. While the bio-fuel volumes blended into the gasoline and diesel pools are hopelessly inadequate to give the US and Europe any significant advantage in terms of oil supply security, the introduction of biofuels has contributed to the fall in demand for refinery based oil products.

As a result of all these factors – and severely aggravated by the economic downturn – demand for refinery products in the US, Europe and Japan is expected to fall throughout the next decade even if economic growth were to miraculously return to the already poor level of the 2000s.

Industry analysts are currently pumping out studies proving the inevitability of large scale refinery closures. In the next 10 years or so, crude refining capacity of about 10 million barrels per day (b/d) could shut – most of this will likely occur in the US, Europe and Japan. This is the equivalent of 11% of the world’s total refining capacity. Of around 660 refineries worldwide, some 100 refineries could close. In addition to the workers at those refineries, port workers, maintenance workers etc. will also lose their jobs.

As a rule of thumb, a refinery cannot be run below 80% of capacity for an extended period of time. Today, utilisation rates at many refineries around the world have fallen below this critical threshold. A total of 9 refineries in the US, the UK, France, Japan and Ivory Coast have already been closed over the past year. Many more are currently “under review”.

So is it really necessary to shut down all these refineries? No, it is simply a result of capitalist anarchy. Africa and Latin America have a large growth potential, but nobody is taking the initiative to develop this potential. Furthermore countries such as China, India and Middle Eastern countries have seen demand growing at a rapid pace. Large new refining projects have been developed in these countries, most of them in order to meet the expected large increases in demand in these countries, but some also in order to target American and European markets and crowd out existing plants.

This is truly a crazy system – refineries with a total capacity of some 10 million b/d will come onstream in the next ten years mainly in China, India and the Middle East, which is around as much as is expected to close in Europe and the US.

Now it is no minor task to build a refinery. A refining complex comes with a price tag of around 5-15 billion dollars depending on the size and complexity of the facility. Tens of thousands of people work for many years to create these huge facilities. What makes these projects even more hazardous under capitalism is that these super-projects are based on the expectation of high demand growth rates in these countries. If a severe recession wipes out demand in these countries, global demand and supply may not balance out and an even more brutal struggle over markets could ensue.

How much more sense would it make to approach the problem of meeting growing energy needs from a social, global perspective! Existing refining capacity could be used to meet the current needs, shipping the surplus to the regions where demand is growing. At the same time, engineers who otherwise would have spent their time and creativity on creating new refining complexes could develop entirely new industries in the countries were the new refineries would have been located. This would indeed be the most effective way of finding a path away from the dependency on oil and emitting ever higher volumes of greenhouse gases. Only once these new technologies have been developed to replace the oil industry does it make sense to close refineries, and workers could be employed in other sectors where they can contribute to the wealth of society.

Of course, bourgeois commentators will shout that this is no more than a utopian pipedream. We agree that the capitalist class, riddled as they are with national vested interests, will never be able to achieve such a Herculean task. They distrust one another, and would rather see the environment destroyed than have their power slip from their hands. However, refinery workers and engineers have no such interests. It is their task to develop an alternative to this capitalist nightmare of wasting resources on a massive scale. Trade unions in all countries could organise regional and international congresses to discuss the future of the industry and present a worked out plan to the public. In this way, they could be seen as a beacon of hope by the whole of society, rather than mere "defenders of an economic past that has outlived itself" as the bourgeoisie will portrait it. This could be an inspiration to workers in other sectors such as cars and steel which suffer from similar problems. Trade unions would truly become the “schools of socialism” as all the workers involved immediately understand that today’s problems can only be solved on an international basis by working together globally. The capitalist press can scream that without holy competition people are not willing to work, while their masters move to dismantle whole industries. It is time for the trade union movement to take up this task.