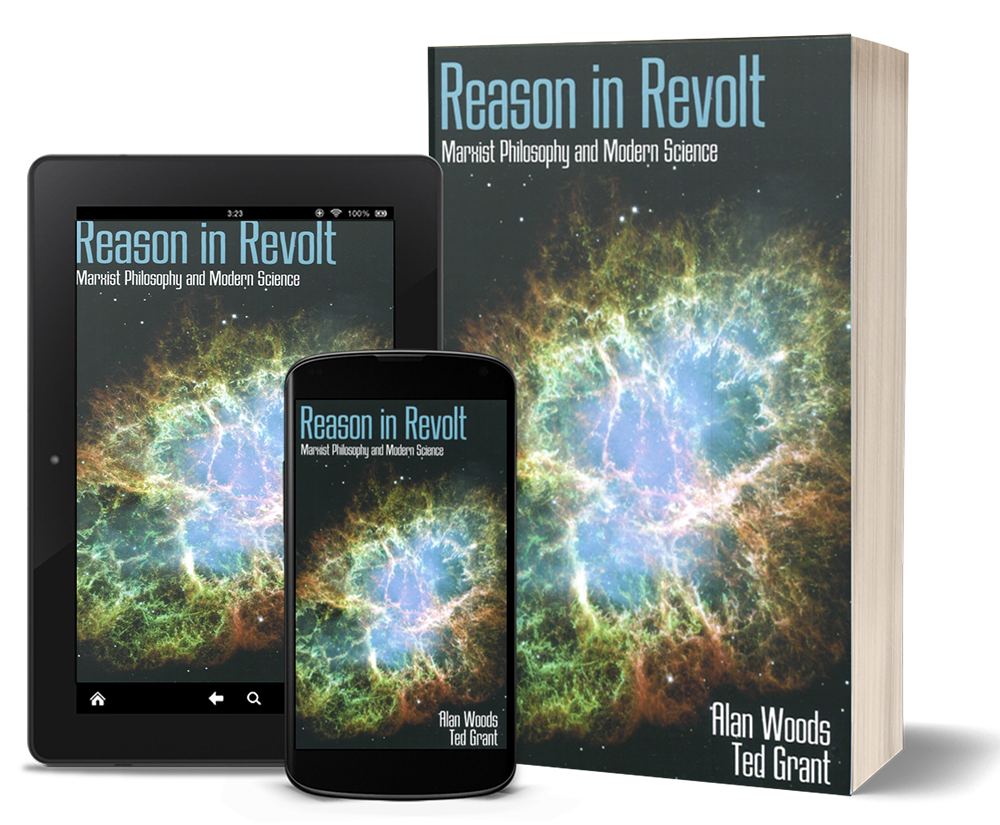 Please note that this glossary is not intended, for reasons of space, to be exhaustive. To avoid repetition, terms explained in the text are not generally included here.

Adaptive radiation- Evolution, from a primitive type of organism, of several divergent forms adapted to distinct modes of life.

Allopatric Theory.- The theory that the evolutionary divergence of populations into separate species, which no longer interbreed, takes place in geographically separate places.

Causality, Law of.- The law defining the interdependence of cause and effect—the necessary connections between phenomena. Causality is an essential question in the struggle between materialism and idealism.

Chromosomes.- A chain of genes found in cells. They are present in all cells in the body and consist of DNA and a supporting structure of protein.

Cognition.- The process by which human thought reflects and observes the real world.

Convergent Series.- Number series in which the successive partial sums obtained by taking more and more terms approach some fixed number or limit.

Cytoplasm.-All the protoplasm of a cell excluding the nucleus.

Determinism.- A belief that all processes are predetermined by definite causes and natural laws and can therefore be predicted. Biological determinism and mechanical determinism are two variations of this premise. Indeterminism is the reverse of this—a belief that events are governed not by laws but by pure chance.

Dialectics.- From the Greek words for dispute and debate, this is the science of the general laws governing the development of nature, science, society and thought. It considers all phenomena to be in movement and in perpetual change. Marxism linked this concept to materialism and showed the process of development in all things through struggle, contradiction and the replacement on one form by another.

Diploid.- Cell with chromosomes in pairs.

DNA.- The molecule that carries the genetic information in organisms (except RNA viruses).

Dogma.- A blind belief in things often without a material base.

Eclecticism.- A mechanical and/or arbitrary collecting of concepts or facts without any pre-established principles or structures. Eclecticism is often used to attempt to reconcile the irreconcilable such as idealism and materialism.

Electromagnetism.- The study of the effects of the relationship and interplay between a magnetic field and an electric current. For example the electrical creation of a magnetic field in a conductor.

Electrons.- Elementary particles that possess one unit of negative charge and are a constituent of all atoms.

Entropy.- One of the main notions of thermodynamics, where it is normally viewed as a measure of disorder. In isolated systems, it is used to determine the way in which the system will change if heated or cooled, compressed or expanded. Thermodynamics holds that the entropy of a system can never decrease but only increase and that a state of maximum entropy is marked by a state of balance in which no further conversion of energy is possible. This has been used to justify the erroneous idea of the “heat death of the universe”. In recent years, I. Prigogine has reinterpreted the Second Law of Thermodynamics in a way which defines entropy differently. According to Prigogine, entropy does not mean higher disorder in the generally accepted sense, but an irreversible process of change which generally leads to more highly ordered states.

Empiricism.- A teaching on the theory of knowledge which holds that sensory experience is the only source of knowledge and affirms that all knowledge is founded on experience and is obtained through experience. The opposite to rationalism. The main failing of this is a tendency to reject reason as a means of deduction in favour of a metaphysical exaggeration of the role of experience alone.

Eugenics.- A doctrine which holds that the human race can be “improved” by selective control of breeding to eradicate less “desirable” traits in society. The supporters of eugenics argue that social problems are caused by inherited genetic traits in people which can be bred out to resolve the problem for future generations. The logical conclusion of this theory is deeply racist and reactionary based on dubious research and prejudice.

Eukaryotes.- One of the two major groups of organisms on Earth (the other being Prokaryotes). Characterised by the possession of a cell nucleus and other membrane-bounded cell organelles.

Gene.- A unit of heredity; a sequence of base pairs in a DNA molecule that contains information for the construction of protein molecule.

Genome.- The entire collection of genes possessed by one organism.

Genotype.- Genetic constitution (the particular set of alleles present in each cell of an organism) as contrasted with the characteristics manifested by the organism.

Gradualism.- The theory that all evolutionary change is gradual rather than occurring in leaps and jumps.

Lamarckism.- The theory that acquired characteristics can be inherited and that any new genetic variation tends to be adaptively directed rather than 'random' as stated by Darwin.

Logical Positivists.- A variation on positivism which attempts to combine subjective-idealist empiricism with a method of logical analysis.

Lysenkoism.- A revival of Lamarckism in the USSR under Lysenko who sought to affect the hereditary modification of plants by certain treatments. His research was subsequently discredited but was heavily touted by Stalinists in its day.

Malthusian Theory.- The theory developed by Thomas Malthus which claimed that population levels were responsible for social problems and should be checked to resolve them since uncontrolled population increases occur on a geometrical ratio whereas the increase in resources occurs on an arithmetical basis. This is not so but laid the basis for the belief that nothing could be done about the problems of the world. In its most extreme form it was the basis for an acceptance of famines etc. as unavoidable and socially necessary.

Meiosis.- Cell division in which a cell gives rise to daughter cells with half as many chromosomes.

Metaphysics.- There are two definitions of this word: the one used by Marx and Engels, and the other more traditional conception. In Marxist terminology, metaphysics is a method which holds that things are immutable and immutable, independent of one another and denies that inherent contradictions are the source of the development of nature and society but rather that nature is at rest, unchanging and static. All things can be investigated as separate from each other. Nowadays, the word reductionism would often be used instead.

The more traditional philosophical definition derives from Aristotle who used the word metaphysics to describe the branch of philosophy dealing with universal concepts as opposed to the observation of nature (in Greek, “meta ta physika” means “that which comes after physics”). Later on it became a synonym for abstract idealist speculation.

Mitosis.- Cell division in which a cell gives rise to daughter cells with a complete set of chromosomes.

Neutron.- One of the two types of particle which form the nucleus of an atom—the other being the proton.

Nodes.- The points in a wave system where the amplitude of the wave is zero. In Hegel, the nodal line of measurement was one where the line is interrupted by sudden leaps, denoting qualitative change (“node” here means “knot”).

Nucleotide.- A biochemical molecule used as the basic building block of DNA and RNA.

Plasma.- A gas that contains a large number of positively and negatively charged particles (ions and electrons). This can occur when a gas is raised to extremely high temperatures (e.g., the outer regions of the sun) or in an intense electrical field. Plasma physics is an important branch of modern science.

Polymorphism.- The coexistence of several well-defined distinct phenotypes or alleles in a population.

Positivism.- An idealistic current which believes in “positive” facts rather than abstract deductions. It denies that philosophy is a world outlook and states that belief should be concentrated on a description of facts rather than an analysis of them. Positivism claims to be neutral and above philosophical outlooks, interested in processes but not willing to go beyond the boundaries of the status quo. In effect they confirm the maintenance of existing social structures.

Positrons.- The antiparticles of electrons—having the same mass but a positive charge.

Prokaryotes.- One of the two major groups of organisms on Earth (the other being Eukaryotes).They have no structured cell nucleus and no membrane-bounded organelles.

Proton.- One of the two types of particles which form the nucleus of an atom—the other being neutrons.

Protoplasm.- Substance within and including plasma-membrane of a cell or protoplasm.

Quantum Mechanics.- The mathematical description of the workings of the atomic and sub-atomic structures.

Quarks.- According to particle physics these sub-atomic particles are believed to be the constituents of elementary particles known as hadrons. Five or possibly six different sorts are thought to exist, but new discoveries are being made all the time.

Quasars.- Quasi-stellar radio sources (quasars) were first detected by virtue of their radio transmissions and appear to show the small bright centres of distant galaxies (although some believe that they are not as far away as people imagine but are moving at high speeds).

Reductionism.- A belief that all scientific laws and processes relating to complex systems can be reduced down to basic scientific laws. Physicalism was a version of this.

Relativity, Theory of.- The laws of relativity (relationship between an object and an observer or another object) considered and developed by Einstein. Einstein's general theory deals with motion, gravity, time and the concept of curved space. The theory which deals with constant velocities is called the special theory. The most famous part of these laws is that which shows the relationship between mass and energy (E = mc2).

Speciation.- The process of evolutionary divergence i.e., two species being produced from one source.

Stasis.- A period in which no evolutionary change takes place in the development of a species.

Sufficient Reason, Law of.- A principle that holds that a proposition can only be considered true if sufficient reason for it can be formulated.

Syllogism.- A doctrine of inference, historically the first logical system of deduction, formulated by Aristotle. Every syllogism consists of a triad of propositions: two premises and a conclusion.

Systematics.- Study of the diversity of organisms.

Thermodynamics.- The branch of physics concerned with the nature of heat and its transformations. The First Law of Thermodynamics is generally referred to as the Law of the Conservation of Energy. The Second Law deals with the concept of increasing entropy (see under entropy).