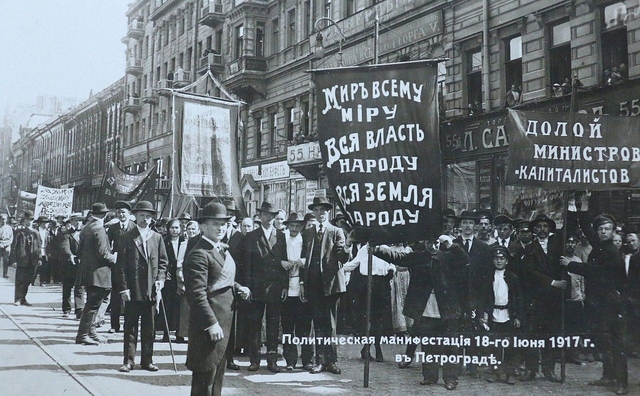 After Lenin returned to revolutionary Petrograd in April 1917, events themselves quickly took several decisive turns. By the end of the month, Alexander Kerensky, the only workers’ representative in the bourgeois Provisional Government, was reporting to the Soviet Executive Committee that the government had effectively ceased to function amid ongoing economic crisis and Soviets around the country were taking matters into their own hands.

“In this sturdy and weighty way worker-peasant Petersburg, the vanguard of the Russian and the world revolution, expressed its will. The situation was absolutely unambiguous. Here and there the chain of Bolshevik flags and columns was interrupted by specifically SR and official Soviet slogans. But they were submerged in the mass; they seemed to be exceptions, intentionally confirming the rule. Again and again, like the unchanging summons of the very depths of the revolutionary capital, like fate itself there advanced towards us : 'All Power to the Soviets !' 'Down with the Ten Capitalist Ministers !'” (Nikolai Sukhanov, The Russian Revolution 1917 – A Personal Record)

Soon, the idea of a coalition involving an influx of workers’ and peasants’ leaders into the government gained traction with the masses. The leader of the bourgeois Cadet party Miliukov was quickly brushed aside, and on the 6th May (Old Calendar) a new government was formed involving collaboration between bourgeois leaders and leaders of the Soviets (Social-Revolutionaries and Mensheviks) for the first time. Only the Bolsheviks and a few Left Mensheviks openly opposed the new government.

Under pressure from Russia’s imperialist allies to relieve losses on the Western Front of the war, the new government pushed for the Russian army to launch a fresh offensive against the Germans. The reformist parties of the Russian working class would never recover from the consequences of their chauvinistic act of patriotism.

The Bolsheviks, meanwhile, on the basis of Lenin’s methods, were beginning to make serious inroads among the Soviets and the masses. The Russian working class had disposed of the bourgeois Provisional Government in under two months, and the reformist leaders at the head of the Soviets now irrefutably held the power to transform society in their hands. As the Menshevik and SR leaders persisted in trying to return this power to the bourgeoisie, even whilst in government, Bolshevik agitation centred on this simple fact. The Bolsheviks used two key slogans to put pressure on the workers’ leaders: ‘Down with the ten capitalist ministers!’ – to form a government that belonged wholly to the masses; and ‘All power to the Soviets!’ – the real organs of workers’ government.

The situation came to a head in June, when the Bolsheviks organised a demonstration under pressure from the Petrograd soldiers, to pile pressure on the Coalition Government. The demonstration was to coincide with the First All-Russia Congress of Soviets, where immediately the SR and Menshevik majorities denounced the Bolsheviks as aiming for a power grab. In fact, the Bolshevik Military Organisation had called the demonstration in response to the increasingly restless mood developing among the most advanced layers of workers and soldiers in Petrograd at the time, and given the response from Congress, it was called off. To ease the pressure, the reformists called their own demonstration. The sea of Bolshevik flags and slogans that followed indicated for the first time that the Party of Lenin was going to be the decisive factor for the Revolution’s outcome.

This reading guide informs the May-June period of the Revolution with analysis, accounts of those who were involved and important speeches and writings from the time. What came immediately after in 1917, the explosive July Days, will be covered in our next reading guide.

This article outlines the methods used by the Bolsheviks between April and June to win scores of Russian workers and soldiers from support for the new coalition government to their cause, culminating in the mass support expressed at the June demonstration.

Government at an Impasse

The Turning-Point | V I Lenin

Here Lenin explains what the transfer of government from undiluted bourgeois rule to the coalition with reformist SRs and Mensheviks means for the revolutionary Bolshevik Party.

The History of the Russian Revolution Volume 1: Chapters 18-19 | Leon Trotsky  Avaliable for purchase

These chapters of Trotsky’s History cover the events which led to the coalition government and then the attempts to force Russian soldiers into an offensive against the Germans in order to relieve the Allied Western Front.

From this eye witness account of a left Menshevik-Internationalist we gain a fascinating insight into the workings of the Soviet Executive and of reformist leaders as they submit themselves to a coalition with the Russian bourgeoisie.

History of the Russian Revolution to Brest-Litovsk Part One: The Question of War, The Campaign against the Bolsheviks and The Offensive of July 1st | Leon Trotsky Available for purchase

The first part of this 1918 booklet by Trotsky includes a detailed explanation of the underlying class forces at hand when the offensive was launched, as well as an overview of the attacks levelled against the Bolsheviks in Russian bourgeois and petty-bourgeois propaganda during this period.

This article from Pravda just prior to the June Days sees Lenin call out the coalition government for its crackdown on dissidents in the army, one of the first signs of a counter-revolution beginning to rear its head.

Here Trotsky describes the complete impasse in which the government found itself in June 1917, and the insoluble nature of a coalition between leaders supposed to be representing workers and soldiers and the Russian bourgeoisie.

Bolshevism and the Demoralisation of the Army | V I Lenin

In this article Lenin contrasts the bourgeois and petty-bourgeois calls for an iron-fisted clampdown on political organisation and action, amid accusations that the Bolsheviks were sowing discord, with the actual Bolshevik methods.

In this chapter of his memoir, British spy Lockhart presents the bourgeois perspective on leading Second Internationalists from across Europe being sent to the Russian trenches to inspire patriotism. He also offers a brief profile of one of the reformist leaders of the coalition government and a key figure in the Revolution, Alexander Kerensky.

Alan Woods’ history of the Bolshevik Party here discusses the coalition government formed at the beginning of May. It also brings to light some interesting accounts of the mood among the soldiers and workers in Russia at this time.

The Masses Start to Respond

The History of the Russian Revolution Volume 1: Chapters 20-21 | Leon Trotsky Avaliable for purchase

In these chapters Trotsky details the effects of the revolution on the peasant masses between February and the end of June, and the transformation of consciousness among workers and soldiers in the same period.

Sukhanov’s useful record of the Revolution continues with a depiction of both the fear of the bourgeoisie as their lack of control over the situation became self-evident in this period, and the changes beginning to take place in the attitudes of the workers and soldiers.

This chapter of Trotsky’s autobiography tells of the scenes which greeted him during the days after he arrived back in Petrograd from exile in May 1917.

This article signalled the launch of Trotsky’s last newspaper before he joined the Bolshevik Party later in 1917. In it he is as intransigent against conciliation with the bourgeoisie, along the lines of Bolshevik propaganda of the time, and positive about the immediate prospects for revolution internationally.

Bolshevism: The Road to Revolution: Part 6 Section 4 – All Power to the Soviets | Alan Woods Available for purchase

This section of Bolshevism covers the work carried out by the Bolsheviks among the masses in May and June 1917.

The History of the Russian Revolution Volume 1: Chapter 22 | Leon Trotsky Avaliable for purchase

The first part of this chapter discusses the First All-Russia Congress of Soviets held in Petrograd from June to July.

This chapter of Sukhanov’s document offers an interesting depiction of events at the congress. It is worth noting when reading, however, that although on the left of the Mensheviks, Sukhanov was ultimately a virulent opponent of Lenin and Trotsky which sometimes colours his analysis of events.

This report of Lenin’s speech outlines his position on how the World War must end.

Here are Lenin’s two speeches at the congress: on the provisional government and on the war.

The Revolution, the Offensive and Our Party | V I Lenin

In this article, published following his appearances at the congress, Lenin discusses the significance of the military offensive backed by the government and the Bolshevik response to it.

The History of the Russian Revolution Volume 1: Chapter 22 | Leon Trotsky Avaliable for purchase

The second half of this chapter covers the June demonstration and its immediate implications.

Here Sukhanov offers an astonishing eye-witness account of the Bolshevik surge in Petrograd as expressed through the June demonstration.

The Eighteenth of June | V I Lenin

Lenin’s analysis of the demonstration in Pravda alludes to its wider implications for the Revolution.

This section of Bolshevism provides an outline and analysis of both the June congress and the demonstration.