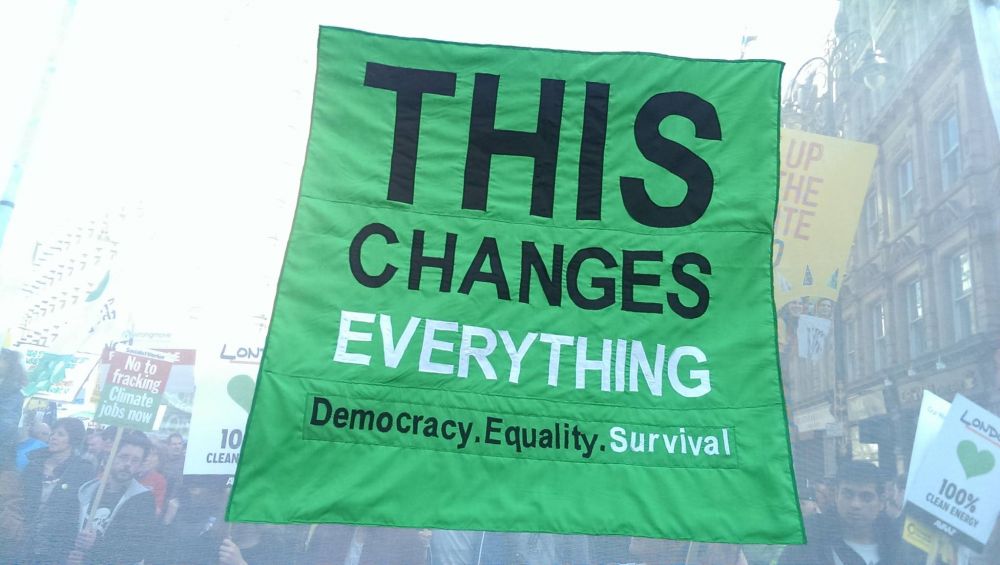 Hundreds of environmental activists from a broad range of backgrounds gathered in the Friends Meeting House in London on Saturday 28th March for an all-day event of talks and discussions about the climate crisis and the radical alternatives needed to solve it.

“This Changes Everything” – an event inspired by the recent book of the same name by Canadian author Naomi Klein – marked an important step forward for the environmental movement, with speaker after speaker – from Green Party leader, Natalie Bennett, to comedian-turned-activist Russell Brand – emphasising the need for “systematic” and “structural” changes to tackle the major environmental issues facing humanity.

Although it was not always clear exactly what kind of change was being proposed – with some advocating socialist alternatives and others simply calling for capitalism with a more benevolent, “responsible” face – what was clear is that many ordinary people are drawing revolutionary conclusions in relation to the question of the environment, and – inspired by Klein and others – are looking to build a mass movement that fights for radical change.]

Whilst the phraseology was sometimes vague, many of the contributions, both from guest speakers and from the audience, explicitly laid the blame for environment destruction with capitalism and its insatiable drive for profits above all else. “Capitalism is dying”, Paul Mason, the Channel 4 economic editor told the audience. The capitalism system, Mason and others explained, can no longer take society forward, developing technology and raising livings standards, in the way it could in the past. Flowing from this were calls for a fundamental, revolutionary change as the only solution to the climate crisis.

For many present, the link between environmental destruction and the capitalist system is clear and obvious. Several speakers stated that the problem lies with the nature of capitalism as a system reliant on continual growth – a statement which Neil Faulkner, the Marxist historian, gave greater clarity to by explaining what is meant by “growth” under capitalism: economic growth, due to the reinvestment of profits and accumulation of wealth under the market forces of competition. 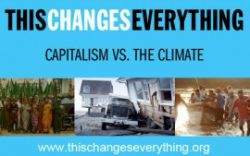 The problem, therefore, as Faulkner described, is not “growth” in the abstract, but the fact that the growth under capitalism is inherently unplanned and anarchic – a growth that is not pursued in the interests of society, but for the profits of a tiny elite. There can, Faulker therefore explained, be no such thing as “sustainable” capitalism. Indeed, under capitalism we do see periods of “zero-growth” – recessions! But in such periods, whilst the economy stagnates (and emissions even fall), it is ordinary people who suffer through falling living standards, whilst the rich continue to profit and pollute.

As one Socialist Appeal supporter pointed out with a comment from the floor, the problem is not that there are “too many people” or that our living standards are “too high”; the problem is the completely irrational nature of capitalism, arising from its basis in private ownership and production for profit:

“We talk of a housing crisis, yet empty mansions exist alongside homelessness; we say that people do not have enough time, yet some people are forced to be idle due to mass unemployment, whilst others work two jobs just to get by. None of these contradictions need exist.”

Indeed, there is no reason why we couldn’t massively raise the standards of living for the whole population, whilst at the same time greatly reduce society’s impact on the environment. The technologies exist to do so; what is needed is a rational and democratic plan of production to integrate and implement these technologies. In short, what is needed is the revolutionary socialist transformation of society.

The lack of clarity about what change we must fight for partly stems from Klein herself. In her book, Klein correctly identifies capitalism as being at fault, as demonstrated by the sub-heading of the book itself: “Capitalism vs the Climate”. Klein emphasised this point further in her talk to the audience, via Skype, stating clearly that individual actions and choices would not be enough, and that “radical systematic change” was needed.

Furthermore, Klein drew out various examples of the systematic ways in which capitalism is responsible for continuous environmental destruction – for example, discussing the “revolving door” of capitalism between government and big business, which intricately links politicians and the boardrooms of the giant energy and fossil fuel companies.

Other speakers, such as John Hilary from War on Want, further explained these links, discussing how our pro-capitalist governments take us (unwillingly) into wars to guarantee energy supplies and access to markets – and thus profits – for the major multinationals. Rather than investing in sustainable energy, our corrupt politicians are merely concerned with sustaining capitalism.

Importantly, Klein stressed that there are different interests in society, and that averting climate change is not in the interests of everyone. Specifically, the 1% - the bosses and bankers - who currently benefit from this profit-driven system will fight against anything that threatens their interests – i.e. their profits – and will actively oppose measures to prevent climate change. “There are sides”, Klein correctly asserted, and therefore “there must be a struggle”.

Nevertheless, following on from the analysis presented in her book, Klein was unclear about what such a “radical systematic change” would entail. On the one hand, the activist and author emphasised the need for “bold demands”; for example, for public ownership over transport and energy. On the other hand, she – and other speakers – seemed to blame not capitalism per se, but just “neoliberal” or “unregulated” capitalism, implying that capitalism could be made “responsible”.

For example, the German government was positively cited by Klein for the steps they had taken in transitioning to a more green energy supply, with an abundance of electricity now coming from solar panels domestically. However, what was not mentioned is that German energy policy is more dictated by geo-political tensions with Russia, which controls the gas supply to Germany, than by any green credentials of Merkel et al. Nor was it mentioned that this increase in solar-generated electricity has come at the cost of eye-wateringly high energy prices for households – that is, on to the shoulders of ordinary people.

Despite these omissions, Klein correctly stated that it should not be ordinary people who foot the bill for averting climate change, noting the regressive nature of carbon taxes and other such measures, which fall most heavily on the poorest within society.

Klein and others, such as Natalie Bennett, emphasised that the fight against climate change must not mean an attack on the living standards of ordinary people. There must, the Green Party leader stressed, be no austerity in the name of “green policies”.

Indeed, as Naomi Klein, Bennett, and others explained, the struggles against austerity and inequality must be linked to the struggles against environmental destruction, and vice-versa. For example, the privatisation and cuts to public spending being implemented by various pro-austerity governments are explicitly damaging our ability to provide publically-owned, environmentally-friendly, affordable provision of transport and electricity – thus constituting an attack on both people and the planet.

This was the other important and encouraging point of emphasis made throughout the day – the need to link up the environment movement with the wider mass movements in society against austerity and war. Various trade union speakers, including Mark Serwotka, the general secretary of the PCS union, stressed the importance of the labour movement and the organised working class in this respect.

Taking power into our hands

However, whilst there was agreement that radical change was needed, and whilst everyone acknowledged the importance of uniting the struggles against capitalism and climate change, there was no mention of what the next steps should be.

For example, Natalie Bennett correctly highlighted that the problems we face are “systematic” and “structural”, and not simply due to the nasty Tories or greedy bankers; and at the same time, the Green leader emphasised the truncated nature of democracy under capitalism, with power currently resting in the hands of those who have the money. “Real political change is not gradual”, Bennett correctly asserted, “but happens in big jumps.”

The logical conclusion of such statements was not drawn however. If power resides in the hands of those with control over the wealth in society; if the problem is structural and systematic; and if a step-change is needed in politics: all of this implies the need for a revolutionary political solution – for an explicitly political movement with a socialist programme that seeks to fundamentally change society, by taking power out of the hand of the capitalists, and placing it in hands of ordinary people.

Naomi Klein emphasised this point, and all the speakers agreed: we must not sit back and wait for politicians to act, or have any illusions that they will agree on and carry out the measures needed to resolve the climate crisis. As one Socialist Appeal supporter noted, “how can we trust the super-rich or the corrupt politicians to save this planet, when they already live on a completely different planet from the rest of us.”

This, then, is the task facing activists in the environmental movement and beyond: to explain the common cause of capitalism behind the various problems facing both people and the planet; to link these struggles together by fighting for a socialist programme across the movements of workers and youth; and to unite and fight for a revolutionary change in society.