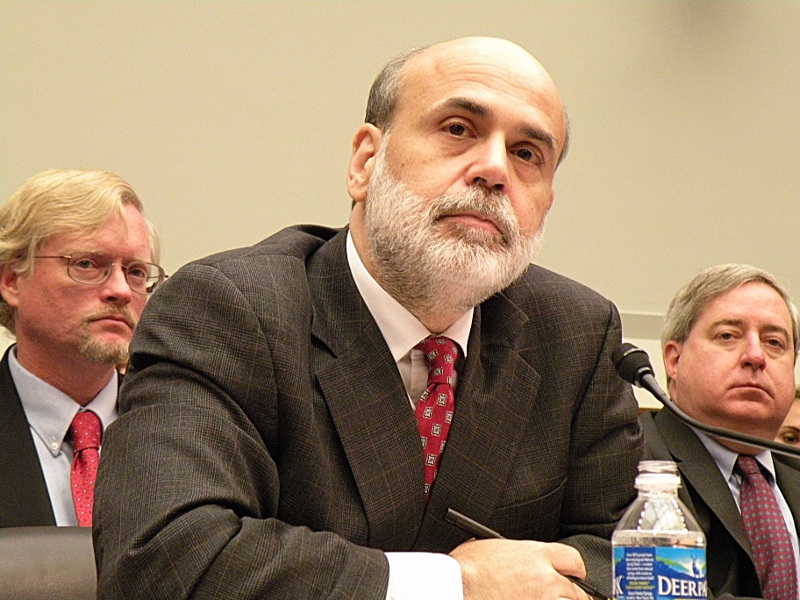 Yesterday, the US federal reserve announced another round of so called “quantitative easing”, or “printing money” as most people know it. Another $600bn are to be injected into the US economy in order to stave off a double dip recession and to lower unemployment. The US ruling class are worried and are continuing their extraordinary measures, which will further intensify the contradictions in the world economy.

The so called “credit crunch” in 2008 meant the bursting of the massive credit bubble that had accumulated over the previous decades. Companies and consumers, previously happy to borrow vast amounts of money to consume and invest, have now started to save money in order to reduce their overall indebtedness. Banks have done the same, meaning that for those who want to borrow, it is much more difficult to do so.

In order to keep the economy moving, governments and central banks stepped into their place. Governments worked up huge deficits. Central banks embarked on so called “Quantitative Easing”, basically printing money electronically and using it to lend money to private companies and governments. The result is that the balance sheet of the US Federal Reserve has increased from $1,000bn to just under $2,500bn and is now set to increase to over $3,000bn.

Just like the printing of money in Germany in the 1920s, the policy has a huge potential to create inflation, which is why the ruling class have been reluctant to use it in the past. Now, however, things are changing.

What was once an extraordinary measure has now become something of the ordinary, which reflects the fact that the economic difficulties of the capitalist economy are far from over. City AM, the free paper of the City of London, remarked that “quantitative easing has become a regular policy tool, rather than an emergency-only instrument”. What is the reason for this change of heart?

Far from the economy re-emerging after the recession in a healthy way, unemployment remains high and credit markets very limited. What little recovery has been seen in GDP (national income) has been mainly due to re-stocking and government spending – consumer spending remains depressed. The housing market has not recovered and is even showing signs of further weakening, according to the Conference Board's consumer confidence survey in September. Far from the “V-shaped” recession, it's looking increasingly like a “W-shaped” recession or a double-dip, as soon as government stimulus is withdrawn.

To cut or not to cut?

The ruling class are split on how to deal with the problems. Whereas in the US, the Federal Reserve and the federal government are continuing the policies implemented after 2008 (although at state level the cuts have started), in Europe the tune is different. The British government's austerity programme, which earned them the front-page headline “Radical Britain” in The Economist, threatens 500,000-1,000,000 lay-offs over the next few years on top of the already 2.5 million unemployed. Similar programmes are being enacted in Spain, Portugal, Greece and Ireland, with Italy and Germany trailing not far behind.

Thus, the editorial in the British City AM, which welcomed the Conservative austerity programme, today reads “Federal Reserve's hubris will cost all of us dearly”. Alistair Heath, the editor, explains how “Bernanke [the Federal Reserve chairman] is repeating, at least in part, the terrible mistake made in 2003 by his predecessor Alan Greenspan”. That is, he is attempting to prevent a necessary readjustment in the economy. The whole thrust of Heath's argument is that there are no short-cuts out of what is a “difficult and painful process”. The attempt by the US to reduce unemployment at the risk of future inflation is clearly an attempt to prevent social unrest (“pain”, as Heath calls it), an unrest that has already seen the Democrats being given a bloody nose in Tuesday's elections. In Europe, Greek, Spanish and French governments have already seen mass unrest as a result of cuts to welfare spending and Britain will soon follow. Alistair Heath is attacking the US ruling class from shirking from the necessity of making the working class pay for the crisis. He is of course correct – from a purely capitalist point of view – but there is more to the story.

Currency wars and the rise of protectionism

As we have explained, the recent disputes over currencies reflects a struggle between the main powers over the world market. The row over the Chinese Renminbi (or Yuan as it is also known) is clearly a sign of rising protectionist tendencies as the main economies are attempting to export their way out of recession. The new quantitative easing programme is another step in this direction.

By massively printing money, the Federal Reserve is debasing the dollar, meaning that US exports become cheaper and imports dearer. Thus, the effect of the US policy is precisely the same as the Chinese one, which the US ruling class has spent so much time over the last six months complaining about. Since the beginning of September, when the Bernanke started talking about QE2, the dollar has fallen by 9% against the Euro. No wonder the European bourgeois are upset and oppose the move by the Federal Reserve. This means that the dollar is now back at the level it was in January, meaning that any competitive advantage for European capital gained during the Greek debt crisis has been wiped out.

The policy of US capital, much like that of European, also means an attack on the living standards of working class people. Inflation, which will inevitably arise from this policy, will eat into the wages of workers in the US, just as cuts in the public sector will eat into the social wage in Europe. It is also true, as Alastair Heath points out, that the US policy will merely re-inflate the bubble, causing asset prices to rise as investors attempt to shield themselves from inflation, leading to another crash in the future. However, his austerity alternative is likely to completely undercut demand in the economy, bringing forward the day of the double-dip.

European capital has started down the road of an all-out assault on the gains of the working class in the past, with severe cuts in public spending, while the US bourgeois, at the federal level, are still putting off the evil day, desperately trying to stimulate growth. Neither policy will work, and both involve major reductions in the standard of living of ordinary working people. Labour movement activists across the world need to prepare themselves for a fierce struggle ahead.