A very successful first public meeting of El Militante Bolivia was held on February 28 in Potosí with 35 people taking part, some of whom expressed an interest in joining El Militante. All this while the city was erupting in mass rioting in protest against economic sabotage being carried out by the oligarchy.

On Thursday, February 28, the International Marxist Tendency/El Militante Bolivia organised a public debate in Potosí. It was a very eventful day. In the afternoon, the massive march against inflation, known as the "empty pots" march, organised by the local Federation of Neighbourhood Juntas (FeJuVe), the Potosí Civic Committee (COMCIPO) and all the organisations affiliated to these bodies, had ended with the looting of the main markets, the Mercado Central, Uyuni, Chuquimia and of many shops in Bolivar Street and others nearby. 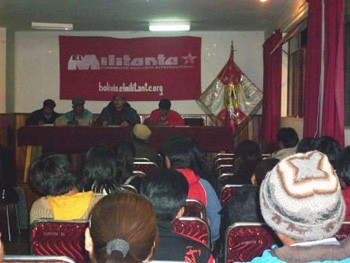 All this was a clear expression of the explosive anger of the people against the speculation and the economic sabotage being carried out by the oligarchy. Even the leaders of the organisations that had called the march were not allowed to speak, harassed by the people who accused them of also being responsible for the selfsame situation they were denouncing. On the same day a concert by Huayna Wila was being held in the main "10 de Noviembre", the aim of which was to present the development targets for the millennium.

Considering all these events, we must admit that we were pleasantly surprised to see 35 people, most of them workers and students, turn up at the meeting El Militante had organised and publicised through leafleting and posters and through announcements in the local radio stations and the University TV channel.

The introductory speech went into a detailed analysis of the economic, social and political situation of Bolivia, comparing this with the revolutionary process in Venezuela. We were also launching our first document, The Venezuelan Revolution at the crossroads by Alan Woods, which was distributed at the meeting.

The main emphasis was on the need to analyse the onslaught of the right wing, the Statute for Santa Cruz Autonomy, and the need to build up a joint mobilisation of workers, peasants and students in order to prevent the referendum on so-called "autonomy" from going ahead and to deepen the process of change.

Ten comrades intervened in the debate, most of them along the lines that we need more than just words, that this programme must be put into practice. Others underlined the need for the participation of the peasantry, the students and the people in general in the struggle. A comrade, quoting from Luis Espinal, said that, "being cautious in times of revolution amounts to cowardice". 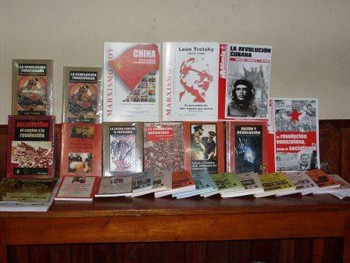 Several comrades referred to the importance of building a political leadership. Some comrades mentioned the need not to abandon our own culture. Almost all those who spoke agreed that it was necessary to mobilise and united against the attacks of the right wing and to educate ourselves for the revolution, both politically and physically. A comrade from Santa Cruz explained what the situation is like there, mentioning that from the "third ring" of the city outwards towards the suburbs, the people are being physically forced to support the referendum on autonomy, a clear illustration of the methods of the right wing.

Finally the comrades said that these kinds of the debates must take place regularly and proposed other subjects, such the question of Cuba, proposing that Cuban comrades who are present in our city should be invited along.

Some comrades proposed that we should take the initiative to call for such a mobilisation. We explained to tem that we do not yet have the forces to organise such mobilisation, but we do have clear ideas and vision and we all undertook to continue the campaign. Several of those present indicated that they wanted to join the IMT, declaring their full support for our ideas.