On Friday 2nd of August we finally made public what we have been doing for some time now: the conscious and consequent study of the ideas of Marx, Lenin and Trotsky. The inaugural activity was a meeting introduced by the Swiss comrade Caspar Oertli. During his leadoff he sketched out in general terms the socio-political and economic crisis that the Old Continent suffers, the question of SYRIZA in Greece and the role of the International Marxist Tendency on a world scale. 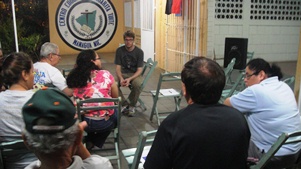 The patio of the CEB San Pablo Apóstol church was the site of the meeting. In the main entrance of the church the communist red flag was waving. Hammer and sickle in the entrance of a “rank and file” church, this needs an explanation: the CEBs (comunidad eclesial de base – rank and file ecclesiastic community) base themselves on the theology of liberation and were a bastion of the insurrectional “Sandinista” struggle even long before the triumph of the revolution in 1979. Many members of the community were present at the meeting. One could see a big smile on all of their faces when they saw the communist flag, a sure sign of approval and celebration. At least 20 people were present at the meeting, among them economists, architects, social workers and members of the Sandinista Youth “19th of July”. Even a former priest was amongst the audience.

“We Latin Americans don’t 'feel' the crisis because we have been living a crisis forever!” explained Yamil Rios, social worker, at the beginning of his contribution. 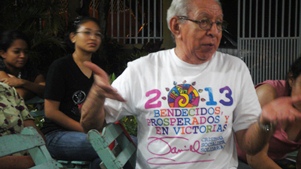 We may be surprised by the situation that prevails in Europe, we are scared by the precarious living-conditions that affect the Greeks, but our conditions are even more precarious and they have been for centuries. Isn’t it amazing, that we as Latin Americans loose our sleep over the events in Europe and don’t pay sufficient attention to what happens here in our immediate surroundings, where we can make a difference?

It is true that the programs of the Sandinista government have reduced the level of poverty, illiteracy and exclusion. But it is also true that the government has not bothered to deepen the revolutionary process. The level of consciousness of several activists of the party in power (the FSLN – Sandinista National Liberation Front) is extremely low, up to the point that some of them consider the study of Marxism as “illogic”. “It surprises me that many members of the Sandinista Youth affirm that the study of Marxism is illogic. For me this is one of the most stupid things I have heard in my life. Someone who considers himself a leftist can’t possibly say that. He’d be denying the class struggle, the hegemony of capitalism and revolution itself” commented Rafael Valdez, economist and member of the CEB San Pablo Apostol.

“The levels of poverty, managed only by the 'bureaucrats of the statistics', have changed” said Felix Jimenez, a Spanish former priest, commenting on the fact that Nicaragua is considered the second poorest country of Latin America (behind Haiti). He then added: “If they would capitalize on the mobilization of the masses –which is an impressive feature of the Sandinista movement – they could go very far!”

The discussion went on for over two hours and some members of the CEB even continued discussing during their official mass on Sunday morning. The meeting helped to consolidate our group even more and connected well with the audience, given that many committed themselves to participate actively in the group.

Workers of the World unite! 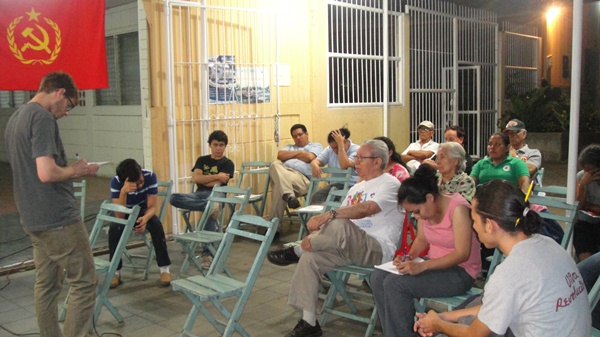