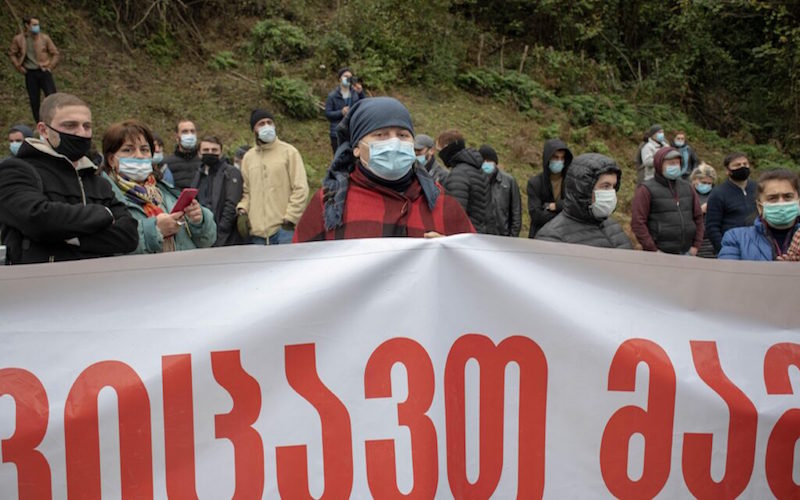 Plans for a US$800 million hydropower project in the Tskaltubo and Tsageri municipalities in Georgia have provoked protests from residents of the Rioni River valley, who are unwilling to see their homes and livelihoods sacrificed on the altar of profit. While different bourgeois parties and politicians squabble amongst themselves, local people fight day and night to protect their land, their homes and the environment.

They oppose the plans of Enka Renewables: a private, so-called green development company, which with the help of the Georgian Dream government, led by billionaire oligarch Bidzina Ivanishvili, has decided to build a large cascade of two dams in the area. If completed, this will be the biggest power project since the dissolution of the USSR, but the impact of the new development on local people could be devastating.

Enka tried to buy off the locals to keep them quiet. But the people don’t want to leave their land and won’t be bribed into silence. On 22 November last year, they gathered for a large protest outside Enka’s headquarters in Zhoneti, and continue their struggle to this day. On the 126th day of continuous protest, last Sunday, 28 February, thousands assembled on the central square of Kutaisi in the west of the country to oppose the hydro dam.

Zhoneti would be affected most of all by the 333 MW Lower Namakhvani dam and power plant, including a 4.4-kilometre tunnel that would swallow the Rioni River. The plant would isolate a number of villages, and force the resettlement of a total 297 households.

The bourgeois government of Georgia didn’t even try to inform the population about the project or the terms of the contract they negotiated with Enka. The lack of transparency is scandalous, as was the government’s reaction to the subsequent protests.

The Minister of Economy and Sustainability said that local people are “exaggerating”, and other ministers tried to depict them as ‘“irrational freaks”. These comments merely reveal the contempt of the political elite towards ordinary Georgians.

The Namakhvani dam is problematic for several reasons. First, in ecological and seismological terms, the durability of the cascade isn’t enough to resist an earthquake of even magnitude five. In 2019, the Ilia State University-based Institute of Earth Sciences warned earthquake damage to the 105-metre dam close to Zhoneti could trigger a 34m-tall wave hitting Georgia’s main city, Kutaisi, in 19 minutes, and flooding 18 municipalities in western Georgia.

Furthermore, the damage to the local microclimate poses a threat to specific species of fish, some of which are near extinction, and could destroy the cultivation of grapes that are critical to the wine industry, which locals depend on to support their families. Not to mention the impact on tourism, as the new plant and dam would be a serious eyesore in the beautiful Rioni River valley.

The government’s goal is to attract foreign direct investment from the rich imperialist powers. And while this will certainly enrich the government’s corporate cronies (and probably plenty of corrupt ministers), such projects will drive the price of electricity up for ordinary people, in addition to threatening their livelihoods.

As we mentioned above, the contract between Enka and the government was struck without any public consultation. The company started building without even presenting the necessary documentation, as they’re legally obliged to do by the Ministry of Environmental Protection and Agriculture of Georgia. Nor did they meet the legal requirement of proving that the project is justified and poses no threat. This goes to show that bourgeois legality is no impediment to capitalist profiteering.

Protesting locals have been met with a brutal response from the police. Several people were injured after the police broke up a protest by Saving Rioni Valley, a local grassroots activist group, after residents from Zhoneti and surrounding villages (including mothers and their children) chained themselves together and blocked the motorway connecting Kutaisi with the north of the country.

The only reaction by the government was sending police to repress the protesters, take down their tents and kick them off Enka’s private property. In this situation, we see again that the state is an instrument of oppression that is meant to preserve the domination of one class over another.

The government argues the new dam and plant will help develop the economy and employ hundreds of locals, but as one activist pointed out: “what does it matter if we’re all flooded?”

Similar protests have broken out over the past several years. These and the recent struggle were largely ignored. Small groups from the marginalised Georgian left had joined the protesters, and demonstrated in the capital Tbilisi, but in general few knew about this struggle. The corporate media almost never showed anything about it. However, this changed following the big protest on the weekend. At this point, various political organisations opportunistically released statements of support.

Mikheil Saakashvili, Georgia’s third President and Honorary Chair of the reactionary opposition party, United National Movement (ENM) (who are currently staging protests against Georgian Dream), released a video addressed to the government declaring: "Hands off Georgian nature!" This is complete hypocrisy, as ENM had already started work on a project to build a dam on the river Rioni while they were in power!

It is clear that the problem is not about this or that party but the rotten capitalist system, in which things are not created and built for the good of the people but to accumulate profits for the few.

Given the danger that a flood poses to some of Georgia’s biggest cities, there is plenty of potential for the protesters to reach out in solidarity to the workers and youth in the rest of the country. Notably, the protest on Sunday was two or three times larger than the crowds of opposition supporters protesting the arrest of ENM's leader in Tbilisi. We can see the depth of popular support for this struggle, compared to the cynical games of the two main parties.

It is likely ENM will attempt to exploit this situation for their own gain. But if this movement develops in size and scope, and tackles the fundamental issues facing all Georgians, it could lead to a class-based programme of joint struggle against the oligarchy-led government, and for jobs, prosperity and investment for the whole country.

Even though there is much work to be done to develop such a movement, and militant organisations capable of persecuting these fights to the finish, such events are a school that will show the Georgian people’s will to fight back to protect their homes, livelihoods and lives.

Only an economy managed by and representing the interests of working people can develop Georgia’s infrastructure without wreaking havoc on the environment and people’s lives.

Events like these will only deepen people’s anger against the entire political apparatus, which exists merely to manage the affairs of the capitalist system.