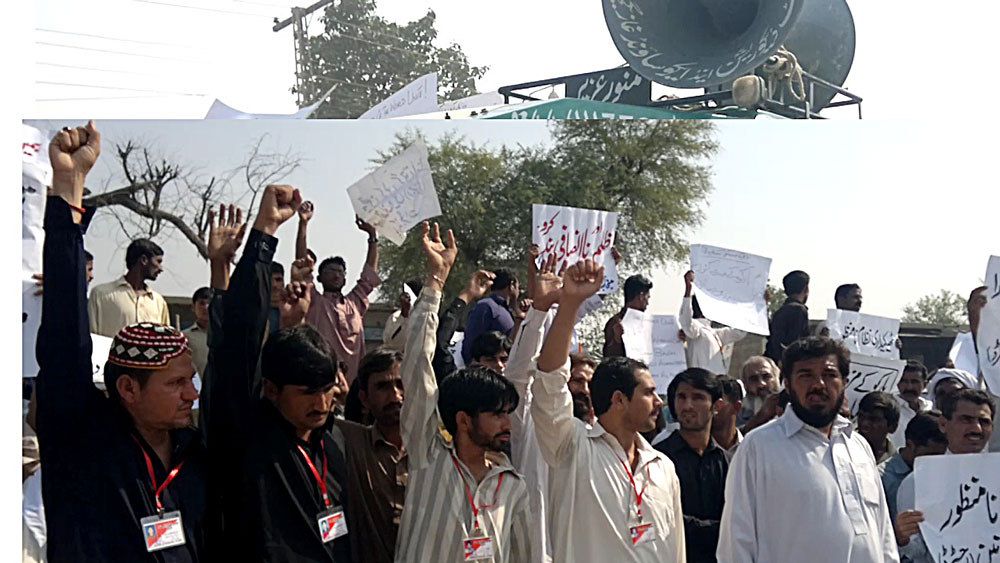 These workers registered the Mazdoor Insaf Union in order to start an organized struggle for their rights, but this was unacceptable for the administration. The administration is trying its level best to sabotage the workers’ struggle, using cheap and brutal tactics. It has also formed an alliance with the local authorities to harass the politically active workers physically and psychologically. The workers on the other hand are not willing to give up and trying to record their protest by organizing processions and press conferences. They have also made appeals to the so-called “free judiciary” which turned a deaf ear to them. Comrades of PTUDC are in constant contact with the workers and raising the issue wherever possible, nationally and internationally.

On November 1 2011, large number of workers from PARCO gathered at Ghazi Ghat to record their protest against the brutality of the state and the company administration. A large number of youth, peasants and trade union leaders from other institutions were also present in solidarity with their class brothers. A rally was organized which turned into a procession at the gate of PARCO Housing Colony. The participants while passing through different streets expressed their anger by chanting slogans like “Down with Capitalism; down with Feudalism; down with PARCO administration; reinstate the fired workers; we will take our rights; fight if you want to live; long live socialist revolution”. The procession at the end of rally was addressed by comrade Shehryar Khan from the PTUDC. In his speech he explained the crisis of capitalism and the “Occupy Movement” of the working class and youth all over the world against this exploitative system in simple words. He said that we will start an Occupy PARCO movement if our fair demands are not met.

Raza Khan Gurmani (Chairman Insaf Union) thanked all the participants and gave a red salute to his fellow workers for their courageous struggle. He said if the workers are not reinstated they would start a countrywide protest campaign in coordination with the PTUDC. Mian Amir Sultan Goraya in his speech promised to provide every kind of legal consultancy to the workers. Comrade Hameed Akhtar (United Labour Union Tehsil Muncipal Administration) said that the fired workers were not alone and workers of all institutions would fight this war together on a class basis. Other speakers included Dr. Sajid, Safi-ud-din, Jameel Khan, Chaudhry Asif Gujjar and Saif-ud-din Watto. At the end representatives of the PTUDC, BNT (Unemployed Youth Movement) and YFIS (Youth For International Socialism) announced the start of a campaign in solidarity with PARCO workers and invited all the workers and youth to join it. It was announced by the PTUDC that they are organising a meeting of workers and trade union leaders after Eid at the TMA Kot Addu Hall to form a joint action committee so that a solid strategy for the reinstatement of the sacked PARCO workers could be formulated.

We appeal to workers of the world to send solidarity messages for the reinstatement of sacked workers of PARCO.