Brazil
Share
Tweet
Today, June 12, pickets were organised outside various embassies in Europe to demand that the court order to seize the Cipla and Interfibra factories be withdrawn, and that these be nationalised and returned to workers’ control and management. 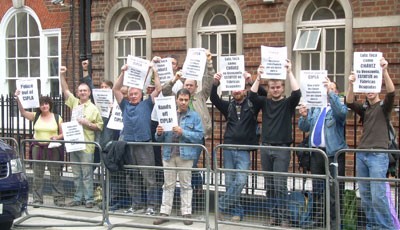 Today, Tuesday, June 12, a picket was organised outside the Brazilian Embassy in London, in support of the workers of Cipla and Interfibras in Joinville, Santa Catarina, Brazil. The purpose of the picket was to bring to the attention of the Ambassador the serious situation that has developed in two of the occupied factories in Brazil. 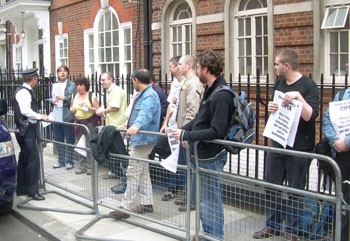 There was a lively picket of about twenty trade unionists and Labour Party members, shouting "Hands off Cipla" and other slogans. The Embassy staff had agreed prior to the picket to receive a delegation to discuss the issues that concerned us. Jorge Martin, International Secretary of the Hands Off Venezuela Campaign and Fred Weston were received by an embassy official to hear what we had to say.

We explained the background to the situation that has emerged in Joinville. We gave a brief exposition of how the workers had occupied the factories and had been successfully running them under workers' control. The workers have had to constantly fight off attempts of the courts to seize the assets of the factories to pay off the debts of the previous owners. 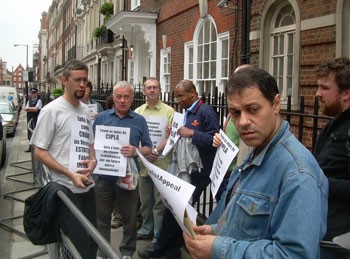 But most of these debts are actually with the state itself. Therefore the demand of the workers that these factories be nationalised makes sense even from a purely financial point of view: the state would recover its debts and the workers could continue to produce, conserve their jobs and actually create wealth.

We also handed over a letter explaining our position, together with a petition signed by about 200 trade unionists at various union conferences where the question had been raised and campaigned on.

Our request was that the workers should be allowed to run the occupied factories without any threats from the state, that the factory councils be allowed to return to the factories and carry out their democratically elected mandate. We were assured that our concerns would be transmitted to the relevant authorities in Brazil. 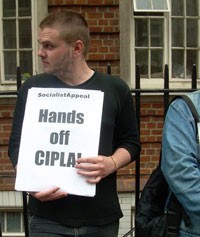 We will continue our campaign until justice is assured.

Here we provide the text of the letter that was handed in to the Embassy:

Ambassador of Brazil to the United Kingdom

of Great Britain and Northern Ireland,

Embassy of Brazil in London,

We would like to bring to your attention a serious event that took place in Joinville, Santa Catarina, on May 31. On the orders of Judge Dr. Oziel Francisco de Sousa, 150 heavily armed members of the Federal Police invaded the CIPLA factory and took over the installations, with a mandate to arrest the members of the factory committee. The same happened at the Interfibras factory. 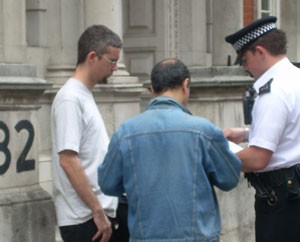 The Judge imposed a special administrator, who proceeded immediately to dismiss 50 workers, among them the whole of the elected Factory Committee. The Federal Police have since been replaced by private guards, who we understand have been pressurising the workers to accept the intervention of the Judge. The latest news we have is that the sacked workers have now started receiving official letters announcing their dismissal for "just cause", which would mean that these workers would lose all their rights.

CIPLA has been run by the workers after the old owners had abandoned it leaving a mountain of debt. The workers took over the plant, thus saving over 800 jobs and have been successfully running it ever since. But they have been under constant pressure from the authorities to pay off the debt of the old owners. To do so would mean bankrupting the factory with the subsequent loss of over 800 jobs. The workers have been demanding that the Lula government nationalise the plants, as the debts are mainly with the state. Instead we now have a situation as outlined above. The debt was accumulated by owners who we understand are being investigated for corruption and other misdemeanours.

As British trade union members, trade union leaders, members of the Labour Party, including John McDonnell MP, we are very concerned about what is taking place in Joinville.

We request that you transmit our concern to the authorities in Brazil and ask them to intervene and immediately put an end to the persecution of the workers and the management of the CIPLA and Interfibras factories. We request the withdrawal of the private security guards from the factories and allow the elected management to enter without threat of arrest, that the dismissals be withdrawn and that the workers be allowed to meet in an assembly and freely determine their own fate.

The Federal Police should not be used against the workers who are doing nothing but defending their jobs and livelihood. They are not criminals!

We have already taken this question up at several trade union congresses in Britain, as the attached list of signatures testifies. We will continue to campaign on this issue until the workers are rightly reinstalled in their place of work.

International Secretary of the Hands Off Venezuela Campaign,

Some videos of the picket:

There was also a protest outside the Brazilian Embassy in Athens, Greece. Here we provide some photographs. 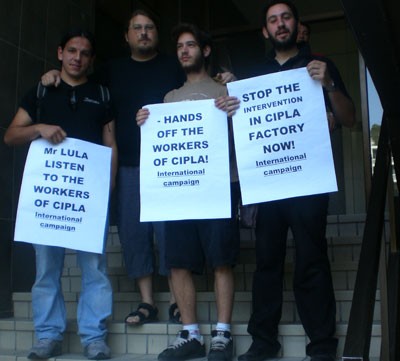 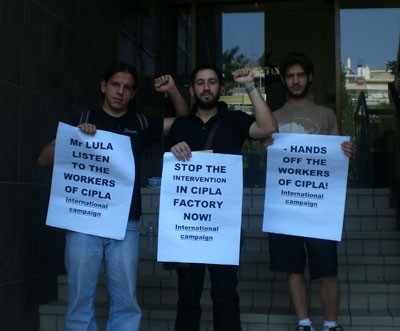 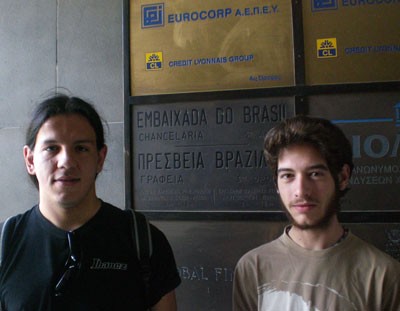 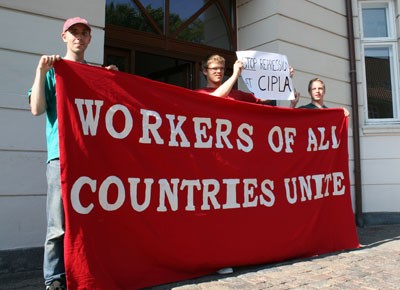 Today June 12, Socialistisk Standpunkt and Hands off Venezuela protested outside the Brazilian embassy in Denmark against repression at the CIPLA factory in Brazil. At the end of the protest a letter was handed to the Embassy, which we reproduce here with a photo.

To the Ambassador of the Brazilian Embassy in Denmark

We write this letter to inform you about, and protest against, some events in Brazil that we find very disturbing. We hope you will read this and take it up with the people in charge in Brazil.

The workers of the occupied CIPLA factory were surprised on the morning of May 31 by 150 heavily armed men of the Federal Police, who invaded the factory in order to arrest the members of the factory committee.

After almost five years of struggle to save their jobs and protect their rights, all the time calling on the federal government to nationalise the factories as proposed by the BNDES (National Social and Economic Development Bank) the workers now find themselves threatened by the Federal Police and with the risk of losing their jobs.

The only "crime" of the CIPLA workers was to fight for the right to work and to earn a crust of bread for their families. The owners had brought the factory to the point of bankruptcy and ruin, making closure inevitable. The workers saved the factory and have kept it running under democratic workers' control. Their fight was an inspiration to workers in the whole of Brazil and the rest of the Americas. They established model conditions for the workforce, including a 30-hour week, while continuing production with great efficiency.

We want the persecution of the workers and the management of the CIPLA factory to stop immediately. We request that the Federal Police be withdrawn from the factory and allow management to enter the factory without threat of arrest, and that the workers be allowed to meet in an assembly and freely determine their own fate.

The Federal Police must be directed against the corrupt and the narco-traffickers and not against the workers!